Overview - Experience the classic anime masterpiece in the highest visual and audio quality ever with this ultimate HD DVD & DVD Two Disc Set! "I will not give up. I will realize my dream...even if it means death!" Acclaimed by anime fans all over the world, Royal Space Force-The Wings of Honneamise comes back to life 20 years after its original release! The stirring odyssey created by nascent anime masters at GAINAX is still unsurpassed for its meticulous artistry and heartfelt drama of a young man's coming of age in a turbulent world!
OVERALL
For Fans Only

The film itself takes place in an alternate reality that closely resembles our own 1950's. Although in this reality, World War II never happened. As the movie opens, industrialized nations across the globe are still reeling from the after-effects of a massive war in the '30s (presumably World War I). Two of the world's superpowers (thinly veiled versions of Japan and the United States) have a volatile relationship, and warring factions have sprung up everywhere as countries, governments, and corporations alike all vy for supremacy in an uncertain age. In the midst of this political and social unrest, a dangerous flight program begins to gain momentum in the Kingdom of Honneamise and its members are determined to launch the first human into space.

A carefree, underachiever named Shirotsugu Ladhatt (voiced by Leo Morimoto) doesn't have the grades to get into the air force, but still dreams of flying. Impulsively, he joins the Royal Space Force, a sham-institution established by the government that has failed to create a ship capable of surviving in space. Surrounded by apathetic colleagues, Shirotsugu becomes determined to change things. As he grows up and begins to motivate the team into action, an opposing military force attempts to thwart their progress, fearing that this new technology could be used as a weapon.

Although the two films are quite different, 'Royal Space Force: The Wings of Honneamise' is often (and I would argue unfairly) compared to 'Akira.' To be sure, the two films have commonalities. Both quickly shed the trappings of their animation styles to create an experience on par with most live action films. And each film features a biting commentary on humanity's imperfections and examines the consequences of our societal insecurities and violent existence.

But while 'Akira' uses a series of thrilling action beats to explore the dark complexities of the mind, 'The Wings of Honneamise' takes a lower-key approach that combines authentic character development with realistic relationships to tell a devastatingly effective coming-of-age story.

As presented in the film, Shirotsugu doesn't just stumble into greatness, he becomes an instrument of change. The script is so carefully constructed that it takes me by surprise every time I watch the film -- I initially find myself unattached to the characters, but by the time I reach the film's more exhilarating third act, I alawys find myself cheering for Shirotsugu and hoping against hope that his spacecraft will reach the stars.

Like its main character, 'The Wings of Honneamise' transcends its modest roots and becomes a universal tale of humanity overcoming all odds. Each of the characters have intricate arcs that develop their personalities naturally -- they react to the story, rather than vice versa. At the same time, the story is never heavy-handed or preachy -- it simply offers up the events of its plot and the weaknesses of its characters without attempting to judge or explain.

From an animation standpoint, 'Wings of Honneamise' is only hindered by its age. But while the film may not be as flashy as most modern anime, it's easy to quickly see past its technical limitations and instead focus on the extraordinary details in every frame. It seems every time I watch 'The Wings of Honneamise,' I notice another little background beat that I had completely missed before. The animated world of film feels so alive that it overcomes its cartoony dressings and delivers convincingly inhabitable environments.

Finally, a word of warning for those who haven't yet seen the film -- while I won't go into to detail, the film's ending makes more than a simple nod to Stanley Kubrick's '2001: A Space Odyssey.' As such, the sheer abstraction of its conclusion has the potential to deflate the experience for some viewers. While I'm personally a fan of the message tucked inside, would-be fans should brace themselves for possibly less than satisfying cap to an otherwise strong story.

Like any slower drama, 'Wings of Honneamise' is a film that requires an investment of your time and patience, but I've personally always found the payoff well worth it. Along the way, the film offers some beautifully detailed animation and a breathing world that rarely fails to impress. Explosions and energy beams are easy to come by, but how often are you legitimately moved by a feature length anime? 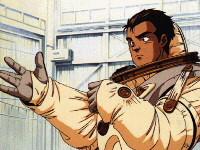 Presented in its original 1.66:1 ratio (with thin pillar boxes on either side of the screen), unfortunately this 1080p/VC-1 transfer of 'The Wings of Honneamise' doesn't look nearly as impressive as it should.

Plagued by dirt, flecks, and scratches, this less-than-vibrant presentation never let me to forget the film's age. The colors are slightly flat and washed out, and the transfer only seems to feature vivid primaries (of the sort I've come to expect on HD DVD) during exterior scenes. Making the situation more irritating are darker scenes that feature heavier noise, grain fields that spike at random, light artifacting that's visible in many shots, and an overall contrast that frequently wavers. Though these problems seem to improve somewhat by the end of the first act, they continue to pop up occasionally throughout the runtime of the film.

On the bright side, the one area in which the transfer really shines is in its fine detail. Gone are the blocky expanses and the blurry elements of the background art that plagued previous editions, and in their place are crisp objects and line work that really make the intricate designs leap off the screen. There's a welcome illusion of depth to the image (despite the 2D nature of the animation) and the extra detail only served to increase my love of the original artwork.

In the end, the visuals on 'The Wings of Honneamise' are certainly an improvement over other DVD and VHS presentations of the film (including the nauseatingly soft DVD version bundled in this two-disc set) -- in fact, I'd even go so far as to call this release a coveted upgrade for purists and devoted fans. That being said, the print could clearly use a serious polish and compared to the quality of more recent, high definition releases like the 'Freedom' series (also distributed by Bandai Visual), overall this amounts to only an average HD DVD transfer. 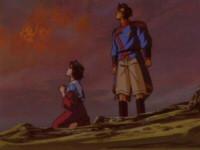 The video may be somewhat underwhelming, but the audio on 'The Wings of Honneamise' gets an exquisite upgrade that opens up the soundfield and crafts a convincingly immersive soundscape. This HD DVD release includes three audio tracks -- a go-to Japanese Dolby TrueHD 5.1 surround mix (16-Bit/48kHz/4.6 Mbps), a boisterous but flat Japanese Linear PCM surround mix (1.5 Mbps), and a decently-dubbed English Dolby Digital-Plus surround mix (640 kbps). While the PCM track packs more instantaneous oomph as it blasts right out of the gate at higher sound level, after some volume matching, the richer TrueHD track proves to be the real audio treat of this disc.

Each channel gets a substantial workout and the booming LFE adds a solidity to the mix that has been missing in every previous release of the film on home video. The treble ranges complete the dynamics and add up to a full mix that shines when the music crescendos or the drama intensifies. Movement and accuracy are dead on and the rear speakers do a great job of pulling a blanket of ambient effects around the listener. Dialogue is crisp and well prioritized, rocket engines shake the room, and the cannon and gunfire in the third act bounds across the soundfield with terse power.

The only downside to the experience is that the original sound design hasn't been perfectly overhauled and there are some minor fluctuations in the volume levels that can be a bit distracting. Seeing as this issue occurs in the exact same spots on the previous DVD releases, it would seem to be the fault of the original master, but it remains a black mark in this otherwise flawless audio presentation.

Tragically light on supplements, this HD DVD edition of 'The Wings of Honneamise' is extremely similar to recent releases of the film on DVD. The only major missing feature is a director's commentary from the standard DVD released in 2000, but since it was recorded in Japanese, English-speaking fans aren't likely to mind its absence.

Instead, the only two included supplements are a "Theatrical Trailer" (2 minutes) and a "Pilot Film" (4 minutes), which functions as an extended trailer of sorts. As you might expect, neither is particularly exciting, but it is interesting to see how the film was originally marketed to audiences. Both are presented in poor-looking 1080i widescreen. 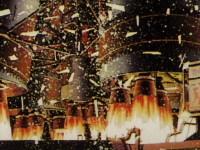 'The Wings of Honneamise' is a spectacular feature length film that's a virtual gold mine of story, character, and emotion. While the included TrueHD audio mix on this HD DVD matches the quality of the film itself, unfortunately I found both the video and the slim supplements package underwhelming. Add to that an exorbitant pricetag of $79.99 ($55.95 on Amazon), and I'm sorry to say that this one's for fans only.