Overview - Las Vegas showroom magician Cris Johnson has a secret: he can see two minutes into the future. Sick of the government and scientific interest in his gift, he lies low in Vegas, performing cheap tricks and living off small-time gambling “winnings.” But when a terrorist group threatens to detonate a nuclear device in Los Angeles, government agent Callie Ferris must use all her wiles to capture Cris and convince him to help her stop the cataclysm.
OVERALL
Give it a Rent

The latest in a long line of films to feature the concept of precognition, 'Next' structures its entire premise around a character who can "see" two minutes into the future and is constantly altering it. While I'm generally inclined to view such plot devices as something of a cheat, I was optimistic going into 'Next,' if only for the fact that it's based on the short story "The Golden Man" by sci-fi visionary Philip K. Dick ('Blade Runner,' 'Total Recall').

To be sure, the first few minutes of the film suggest some intriguing possibilities. Cris Johnson (Nicolas Cage) is the guy who can "see" up to two minutes into the future, but unlike the superhero types most commonly associated with such powers, Cris has resigned himself to playing the seedy Las Vegas circuit as his alter-ego, lame magician/psychic Frank Cadillac, getting by only peering far enough ahead to scam what he needs to survive (usually from a quick trip to the slot machine).

From that quick set-up, 'Next' veers off into two parallel plotlines. Agent Callie Ferris (Julianne Moore) has been tracking Cris for months, convinced that his psychic gifts can help her prevent a terrorist plot to blow up most of the West Coast. Meanwhile, Cris has begun seeing visions of the beautiful Elizabeth Cooper (Jessica Biel) far beyond his standard two minutes into the future without any explanation. Believing Liz to be his romantic destiny, Cris manipulates his way into her good graces by staking her out at a local diner. After a truly creepy meet-cute, she runs off with him on a road adventure that will ultimately put all of the film's characters on collision course with potentially deadly consequences.

Unfortunately, despite the interesting set-up, neither of the film's two storylines work particularly well. First off, the terrorist/thriller stuff is utterly bland and predictable. Director Lee Tamahori ('Die Another Day') and screenwriter Gary Goldman (a frequent Dick adapter who also penned 'Total Recall' and 'Minority Report') give the villains behind the plot scarcely any screentime, seemingly recognizing them as a mere plot contrivance. Instead, what we do get are many scenes featuring Cage and Moore squaring off about Big Grand Ideas like fate, responsibility and personal sacrifice. Admittedly, it's a noble enough attempt to distill Dick's often existential (and largely unfilmable) narrative concepts through an action movie template, but unlike with his earlier Dick adaptations for 'Recall' and 'Report,' Goldman seems to have forgotten all the action in 'Next.'

The love story between Cris and Liz also falls painfully flat. With his greasy hair, bug eyes and eye-rolling magic trick come-ons, Cage seems as likely a love interest for Biel as Hannibal Lecter. (Seriously, at one point he turns a napkin into a rose, says "I love you," and -- poof! -- she melts instantly.) As for the one-time '7th Heaven' star and frequent Maxim cover girl, she must have the greatest agent in Hollywood, because however likable she may be (and, yes, almost impossibly beautiful), I have yet to see her give a performance of more than one-note range.

The most frustrating aspect of 'Next,' however, is the arbitrary nature of Cris' precognitions. It is simply an insult to the audience's intelligence that it's never explained whether Cris can control his visions by calling them up at will, or if they just "happen" to him without warning. This becomes such a convenient lie-by-omission that it ultimately turns the entire film into narrative Swiss cheese. It's no fun to play along (let alone muster up any empathy for the characters) if we don't know what the rules of game are, but 'Next' is too lazy to care.

Despite all of these issues, arguably the movie could have still paid off thematically if it had a really great, shocking twist ending that threw everything that came before it into a new light, but alas, 'Next' has one of the most deflating non-climaxes I've seen in a major movie in years. I won't spoil it, but beyond getting simple lip service, none of the fascinating ideas in Dick's original story are explored. What is the responsibility that comes with an extraordinary gift like Cris'? Can romantic love truly be genuine, or is it just a product of our own idealized dreams? And if you could see into future, should you change it? As intriguing as these questions are, 'Next' doesn't attempt to answer a single one. Instead, it leaves everything open-ended, in yet another of those shameless Hollywood "resolutions" that seem more like a set-up for a sequel than a satisfying, cohesive conclusion.

'Next' is probably still passable as a Saturday night rental if you go in expecting little, but for a film that could have been so much more, it's hard to rank this one as anything more than a disappointment. 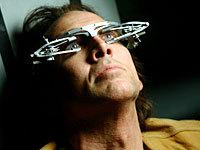 Among the transfer's issues are some fluctuating black levels, some overly hot contrast that white-washes detail at times, and some obviously oversaturated colors, which result in often articial and waxy-looking fleshtones. Perhaps most distractingly, 'Next' features some of the most cheap-looking CGI and rear-projection I've seen in a major studio picture in years, and these moments in particular look washed out and flat.

Despite such unevenness, 'Next' is not as bad as it may sound. There's still a good deal of depth and texture to the image, with close-ups in particular delivering the kind of striking high-def found in better transfers. Sharpness is also quite good, with only rare instances of softness and no apparent edge enhancement. Finally, typical of a fresh theatrical title, the source is pristine, with nary a blemish to be found.

Sure, I wish 'Next' had been more consistently impressive, but it's still pretty good overall.

Although Paramount may have chintzed out on high-resolution audio on its recent release of 'Blades of Glory,' the same can't be said of 'Next,' which includes a relatively strong Dolby TrueHD 5.1 surround track (48kHz/24-bit/3.2Mbps), along with a standard Dolby Digital-Plus 5.1 surround mix (768kbps).

Although the film itself alternates between action and the gooey romantic stuff, it's fairly consistent in delivering sustained envelopment. Bullets and explosions fill up the rears nicely, and Mark Isham's surprisingly restrained, new-agey score bleeds nicely to every channel. As a good portion of the film takes place on the road, minor ambiance is nicely done, with location and natural sounds getting prominent placement in the surrounds. Dynamics are also solid, with strong if not couch-shaking low bass, and a clean, defined sound to the rest of the spectrum. Dialogue is also well-balanced in the mix, so I had no volume issues.

'Next' hits HD DVD day-and-date with the standard-def release, and both feature an identical but fairly slim set of extras. As a bonus to high-def fans, all of the included supplements look terrific in full 1080p/VC-1 video.

The heart of the package is a suite of four making-of featurettes, running a total of about 35 minutes. "Making the Best 'Next' Thing" (17 minutes) and "Visualizing the 'Next' Movie" (12 minutes) are the most substantial of the bunch, featuring slick interviews with the film's stars and crew, alongside some nicely presented behind-the-scenes footage. Granted, a good portion of "Making" is plot recap, but Cage in particular weighs in on some of the meatier themes that attracted to him to the project, so at least it isn't all fluff.

Unfortunately, the same can't be said for "The Next 'Grand Idea'" (6 minutes) and "Two Minutes in the Future with Jessica Biel" (2 minutes). Both are just too slight to register, with Biel's simple answer to the question "Would you want to see into the future?" seeming like total padding to get an extra bulletpoint on the back of the box.

The only other included extra is the film's Theatrical Trailer, also presented in full 1080p HD.

Intriguing in concept, unfortunately 'Next' is a problematic thriller that fails on just about all levels. That doesn't mean it isn't an interesting failure, but set your expectations accordingly. As an HD DVD release, this one certainly delivers on the bottom line, with above-average audio and video, and a slim (but spiffy-looking) supplements package that matches the DVD bulletpoint-for-bulletpoint.

Sale Price 5.99
Buy Now
3rd Party 4.89
In Stock.
See what people are saying about this story or others
See Comments in Forum
Previous Next
Pre-Orders
Tomorrow's latest releases