The Dukes of Hazzard

I suppose there is something oddly refreshing about a movie that aims low and achieves even less -- at least those annoying little things like artistry, craftsmanship, wit and ambition can't get in the way of all the stupid sight gags, pratfalls, big-breasted women and shit blowing up real good. And by that criteria, 'The Dukes of Hazzard' is a masterpiece, a film that takes a stupid TV show and makes an even stupider movie out of it. Some sample dialogue:

Uncle Jesse: What do you get when you cross a donkey with an onion?
Luke Duke: What?
Uncle Jesse: A piece of ass that brings a tear to your eye.

I know, I know, lines like that and movies like 'The Dukes of Hazzard' are supposed to be dumb. They know they are dumb. And they know the audience knows they're dumb. But I'm still reminded of that old saying, "If it acts like a duck, walks like a duck and talks like a duck, well, it's a duck." So after a while, if all you do is act, walk and talk like a stupid ignoramus, doesn't that just make you... a stupid ignoramus? I think Forrest Gump said it best: "stupid is as stupid does."

I ponder such existentialist questions because my memories of the original 'The Dukes of Hazzard' television show are somewhat fond. Yes, it was a pretty dumb show, but it also had a down-home charm, a simplicity and good-temperedness sorely lacking in its high-concept, big-screen update. Running on CBS from 1979 through 1985, the show starred John Schneider and Tom Wopat as the Brothers Duke, two rootin' tootin' good ol' boys who wanted nothing more than to go out drinkin' and skirt chasin' -- at least when their little sister Daisy (Catherine Bach) wasn't tagging along and lookin' mighty fine herself. They also had an arch nemesis in Sheriff Roscoe P Coltrane (James Best), which inevitably led to one great slo-mo '70s TV car chase per episode. Yes, 'The Dukes of Hazzard" was nothing more than a small-screen rip-off of the 'Smokey & the Bandit' movies, but along with 'Charlie's Angels' and 'Hart to Hart,' it was one of my favorite shows, and in the late '70s there was no better way for a ten-year-old to spend his Saturday nights. 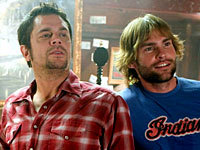 Unfortunately, the new 'The Dukes of Hazzard' substitutes crudity, lewdness and vulgarity for charm. Geesh, I sound like my grandmother here, but I'm sorry -- Jessica Simpson as the new Daisy Duke just ain't no Catherine Bach. (If you saw Simpson's guest turns on "That '70s Show" or any of her music videos, you know the extent of her acting ability and range.) Even Johnny Knoxville and Seann William Scott -- two actors who have been funny before, especially Scott in the 'American Pie' movies -- fail to generate the camaraderie and heart that Schneider and Wopat brought to pretty cardboard-thin roles. And don't even get me started on Burt Reynolds as Jefferson Davis "Boss" Hogg, who seems to be just phoning it in to pay for his plastic surgery bills. Only the film's enjoyable surprise guest stars, including TV vet Lynda Carter and an amusing Willie Nelson as "Uncle Jesse," bring any likability to an otherwise crass enterprise. You know you're in trouble when the most charismatic performer in the whole movie is the General Lee, an automobile.

Maybe I'm just not of the right mind-set to enjoy 'The Dukes of Hazzard,' 2005-style. Like Larry the Cable Guy, "The Jeff Foxworthy Show" or all those country radio stations that have abandoned The Dixie Chicks, it is a worldview very far removed my own. I'm a born city boy, having grown up in urban sprawl and taught liberal and progressive values. Given that, I'm just gonna say it and let the hate mail begin -- I'm not from the South, I don't really understand the Southern way of life, and I can't say I particularly want to find out. So I guess that means 'The Dukes of Hazzard' wasn't made for me anyway. A movie about good ol' boys, drinkin' whiskey, crashin' cars and ooglin' and big-breasted women, this is about as far away from my life experience as is possible. But, for that matter, it is almost as far away from the original '70s TV show as possible as well.. I'm all for car crashes, 'Smokey and the Bandit' references and a big ol' bucket of fried chicken -- but did it all have to be as obnoxious as this? Once again, my childhood memories have been soiled. I just hope 'Knight Rider' isn't next...

Going into this review, I actually did not have very high hopes for the picture quality of 'The Dukes of Hazzard.' Warner has been using a few clips from the film as part of a promo reel it places on the front of every one of its new HD DVD disc titles, and quite frankly they don't look very impressive -- the images look too dark, oversaturated and sorely lacking in detail. So after popping in this disc I braced myself for the same crap picture quality. Alas, though I was pleasantly surprised that the actual transfer does look better, it still is rather lacking compared to other Warner HD DVD titles.

Right from the first scene, it is clear 'Dukes' has been extensively tweaked to pump up the picture. Unfortunately, I'm just not a fan of the technique, at least with films that have a more realistic, non-fantasy milieu like this one. Here it really plugs up the picture. While the transfer does reveal a good bit of film grain in some scenes, that didn't bother me, as it actually helps give the movie the appropriate rugged, down-home feel it should. But colors are what really suffer. They look too unnatural with hues impossibly oversaturated, which I found distracting. Fleshtones almost look painted on, and are sometimes either a tad too yellow or red. And while contrast and sharpness are pretty good, and the image isn't really soft, it does lack any sort of real depth. I was surprised how often the picture fails to look three-dimensional -- I forgot I was watching high-def and not standard DVD for most of the film's runtime. On the plus side, the moire patterns and occasional pixelization I noticed on the standard DVD release are gone here, and again this transfer doesn't look as bad as as it does on Warner's HD DVD promo reel. Still, I am probably the least impressed with 'The Dukes of Hazzard' on HD DVD than any other release on the format yet.

Yikes, zero for two. Even the new English Dolby Digital-Plus audio track here is a tad disappointing. Granted, it is not bad at all on its own terms, it just was not as fun and exciting as I expected. Dynamic range is slightly cramped, with the high end sounding a bit clipped and mid-range also bland -- for all the grinding metal of the car crash scenes and the loud southern rock songs, the fidelity of the mix just doesn't have the pop I hoped for. Low bass is better and there is some oomph the subwoofer, but it can't offset the overall weakness of the rest of the mix. Surround use is also unimaginative -- there are some nice instances of localized effects in the rears, but it is only evident with the bombast and never used for subtlety or atmosphere. Of course, this is 'The Dukes of Hazzard' and not 'Ordinary People,' but I still longed for a soundtrack that was a bit more enveloping.

Along with the uneven quality of the video and audio, the extras ported over from the standard DVD release are, well, standard. Undoubtedly, few would have expected incisive and probing supplements on 'The Dukes of Hazzard,' but with no commentary or in-depth making-of included, the fluff we do get fails to generate much interest.

Without a commentary, it is up to four short featurettes to take up most of the slack. All include comments from most of the film's main cast and crew, including director Jay Chandrasekhar, stars Johnny Knoxville, Seann William Scott and Jessica Simpson, and key production personnel. The first three featurettes are mainly silly stuff, the documentary equivalent of puff pastries. "The General Lee Lives" is a five-minute lovefest for the film's real star, its car. We get lots of shot-on-video test footage of said vehicle, and the filmmakers fawning over how cool it is. (Really? I always thought K.I.T.T. could kick the General Lee's ass any day.) "How to Launch a Muscle Car 175 Feet in 4 Seconds:" is more of the same, showing us how the special effects team and a stunt driver launched a muscle car nearly the length of half a football field in only four seconds. Finally, "Daisy Dukes: The Short Short Shorts" actually spends four minutes talking about Jessica Simpson's butt. (There is really nothing I can say to follow that up.) A bit better than the above is the 15-minute "The Hazard of Dukes," only because it is longer. A straightforward making-of, we get the usual fawning EPK interviews about how rowdy, raucous and rip-roarin' the movie is. We also get yet more about the General Lee and the film's stunts -- man, do these people love that car! -- and a two whole sound bites where Jessica Simpson actually speaks in full sentences.

Speaking of the ex-Mrs. Nick Lachay, also included is the music video for her coma-inducing cover of the Nancy Sinatra classic "These Boots are Made for Walkin'." Oddly enough, Simpson wears a full-length winter parka and black veil over her head, so you can’t see her face or body. Is nothing sacred? More promo fluff includes the film's theatrical trailer in full 2.35:1 widescreen.]

Rounding out the set is no less than 25 minutes of unrated Additional Scenes, plus two collections of Bloopers (standard, and unrated as well ). Yes, we get numerous, gratuitous shots of breasts, boobs, knockers, jugs, hooters and even one pair of "man tits." All of which helps distract us from the fact that nothing in the additional scenes is really worth watching, and none of the bloopers are all that funny (even with all the swearing). For masochists and Russ Meyer disciples only.

(Note: Warner has even kindly included two easter eggs that appeared on the standard DVD release, accessible here right from the main menu. Both "Tattoo: General Lee -- A Fan's Revelation" and "Stunt Dummies Hit the Town" are short and fluffy, though "Stunt Dummies" is an amusing bit on the dangers of drinking and driving even when you're made of plastic.)

Let's face it, 'The Dukes of Hazzard' is a pretty dumb film. It is based on a dumb TV show, everyone in the movie acts as dumb as they possibly can, and even the audience would have been disappointed if it had been genuinely smart, clever or witty. (Not to worry.) Unfortunately, this HD DVD doesn't do even a film as lame as this justice, because the video and audio are a bit sub par for the format and the standard DVD extras only marginal. So what really sets this release apart is the inclusion of the HD DVD-exclusive "In-Movie Experience" feature, which is always fun. I wanted to give this one high marks, but I'd say reserve it for a rental unless you absolutely love the film.