Overview - Meet Patch Adams, a doctor who doesn't look, act or think like any doctor you've met before. For Patch, humor is the best medicine, and he's willing to do just about anything to make his patients laugh - even if it means risking his own career. Based on a true story, Patch Adams combines side splitting humor with an inspiring story that transcends the traditional comedy. Based on a true story.
OVERALL
Worth a Look

There seem to be two performers in Hollywood that go by the name Robin Williams. The first is a thoroughly engaging and empathetic actor who's tackled material like 'Good Will Hunting' and 'Good Morning Vietnam,' starred in a variety of weighty films like 'Awakenings' and 'Dead Poets Society,' and dabbled in disturbing fare like 'One Hour Photo' and 'Insomnia.' The second is a sad comedian desperately vying for the attention of an audience that eats up melodrama and predictable family laughs.

Directed with swelling violins by Tom Shadyac ('Liar Liar,' 'The Nutty Professor,' and 'Bruce Almighty'), 'Patch Adams' features the latter Williams as a revolutionary doctor from the '70s and '80s named -- you guessed it -- Patch Adams. After voluntarily committing himself to a mental institution, Patch emerges with a desire to help others get through their pain, loss, and disease. So, he enrolls in a medical university and begins to apply his own brand of medicine to everyone he works with. Realizing that laughter literally is the best medicine, Patch butts heads with the school's Dean (played with villainous voracity by Shawshank's warden, actor Bob Gunton), falls in love with another student (Monica Potter), and begins developing an idea for a unique facility that would truly take care of the sick.

I'll cut to the chase -- I found 'Patch Adams' to be a cheap and calculating piece of cinema that blatantly pulls every heartstring it possibly can. Hugs and smiles abound? Definitely. Tragic deaths? Yep. Sappy love story? Here. An overly-emotional denouement? Check. More tragedy? Done. One man who develops a crowd of loyal followers that help him overthrow the evil hierarchy of conservative medicine? Whew... of course. By the time 'Patch Adams' ended, I was exhausted -- for every bit of real emotion it managed to elicit from me, I felt an overwhelming distaste for its heavy-handed methods and overt manipulation.

For those who argue the merits of melodrama, I'll admit it attracts a huge crowd and appeals to a lot of people looking for cinematic escapism (the 1998 theatrical run of 'Patch Adams' pulled in more than $130 million domestically and $200 million worldwide). My counter is that regardless of intent or appeal, this kind of screenwriting and filmmaking often leaves major thematic holes in its wake. Tragedy strikes only to reinvent those experiencing it, victims portrayed on screen (in this case children) are further victimized by being unintentionally exploited for impact, and facts are altered to make the story more beneficial to the emotional punch the director is swinging at viewers' faces.

I'm sure the real Patch Adams is a fascinating and good man, and I assume his life was more complex and his struggles more layered than this cartoony rendition would suggest. I even bet the villains of his story had good intentions, despite their efforts to blockade his efforts (he was at one point, after all, practicing medicine illegally). This is a wafer-thin glimpse at humanity that practically proclaims its universalism without convincingly looking at any realistic universal themes.

In the end, I can only review a flick with my personal gut and it was sickened to watch this "feel good" comedy. Having said that I know films like this appeal to many moviegoers, and sometimes I really do wish I could demote my problematic elitism enough to enjoy a 'Patch Adams.' Unfortunately, as is, I just can't bring myself to sympathize with the characters, the story, or the intent of this film. 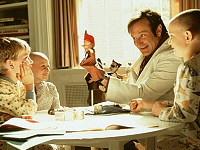 Presented in 1080p using the VC-1 codec, 'Patch Adams' looks decidedly solid -- its bold colors and sharp level of detail instill the picture with convincing depth. I hate to say I'm surprised, but when Universal delivers a quality transfer on a minor catalog title, it really bolsters my faith in the studio's high-def future (especially since the early summer featured a veritable swarm of mediocre Universal releases).

Thankfully, the rich palette and the intricate detail are just the most apparent upgrades. 'Patch Adams' also includes notable black levels, accurate contrast, and a clean source that doesn't stumble from any major noise issues. Exterior shots look quite good -- distant figures in the background are clearly rendered and fine elements like tree leaves are crisp and countable (if one were so inclined). Interiors are also impressive -- the scenes with Williams and the cancer patients are packed with tiny medical tools on tables, easy-to-read writing on charts, balanced whites, and excellent delineation.

I only had minor issues -- a handful of scenes are somewhat soft, occasional shots exhibit a hint of contrast wavering, and I noticed instances of light banding on the bright hospital walls. My only major complaint is that these small problems show up too often. In the end, the video holds up very well (especially compared to the pale and blocky standard DVD presentation), but it still doesn't go that extra mile to make this a top tier transfer. Still, it's a grand upgrade that's sure to please fans of the film. 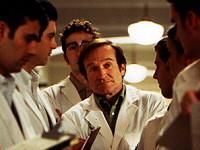 Even though this is a dialogue-centric film with a fairly standard comedy sound mix, it contains a pleasant ambient presence in the rear speakers. Environmental acoustics are convincing and efficiently open the soundfield to make immersion easier for the listener. Likewise, voices are crisp and weighty, filling the center stage even when the overbearing music crescendos. Dynamics are decent (albeit unexciting) and the two or three instances that require some oomph from the LFE channel show up to play. Likewise, treble tones are steady and natural -- orchestra swells and trembling voices are acutely defined and well balanced.

Unfortunately, the relatively quiet soundscape still has some kinks to work out. Pans are occasionally stocky, the subwoofer isn't embraced throughout the entire mix, and the track is too front heavy for its own good. I also noticed that the Dolby Digital-Plus mix included on the disc has a slight issue with directionality and environmental acoustics that the TrueHD track handles with ease (a problem that is most noticeably the first time Williams visits children in the hospital ward). I don't recall ever encountering this sort of strange discrepancy between a TrueHD and a standardized Dolby track (more often, the most noticeable differences are found in the dynamics and fidelity of the tracks).

Still, all complaints aside, the TrueHD track included on 'Patch Adams' does its job suitably well, and is certainly an improvement over the bitrate-starved DVD mix. 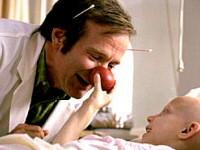 'Patch Adams' arrives on HD DVD with all of the significant extras from the 2-disc Collector's Edition DVD. The only thing missing is some extremely minor text-based content that wouldn't have been missed the first time around.

The biggest draw is an entertaining commentary track with Tom Shadyac that's a good listen regardless of your opinion of the film itself. Shadyac is often as exuberant as Williams himself, bouncing from topic to topic with a clear understanding of the limited amount of time he has to cover a variety of subjects. He discusses the film, the actors, the struggles of the real Patch Adams, the adaptation of Patch's story, and the reasoning behind the significant changes made to his life story. The director was an instant hit with me simply because he's candid and not under the delusion that he's made a perfect film -- as he dissected what works and why it works, I found myself feeling far less judgmental of the director and his film.

The "documentary" mentioned on the box art is actually a fifteen-minute fluffy featurette called "The Medicinal Value of Laughter." While it does include some interesting interview segments with the real Patch Adams, it is mainly an excuse to combine comments from the cast and crew with an abundant amount of clips from the film. I really wish the producers had given Adams his own commentary -- there's far too little of him in this studio puff piece.

Rounding out the content are ten minutes of tired "Deleted Scenes" and mildly amusing "Outtakes," three "Storyboard/Scene" comparisons, and the film's theatrical trailer.

(Note that all of the video features listed above are presented in 480i/p video only.)

Although I loathe the film itself, this HD DVD edition of 'Patch Adams' is another catalog winner from Universal. The video transfer is surprisingly impressive, the TrueHD track is technically on point, and the disc contains all of the significant features from the Collector's Edition DVD. The visual and audible upgrades are readily apparent and should make this a fairly easy decision for fans of the film.

Sale Price 17.88
Buy Now
3rd Party 6.66
In Stock.
See what people are saying about this story or others
See Comments in Forum
Previous Next
Pre-Orders
Tomorrow's latest releases