Overview - Kim Basinger and Alec Baldwin set the screen ablaze in this hot, steamy action-thriller that delivers rapid-fire excitement and heart-pounding suspense. When master criminal Doc McCoy (Baldwin) finds himself rotting in a squalid Mexican jail, a desperate Carol McCoy (Basinger) visits suave crime boss Jack Benyon (James Woods), hoping to strike a deal; her husband's freedom in exchange for his help in pulling off a multi-million dollar heist. But Benyon is much more interested in what Carol has to offer… Once Doc is free, he and Carol escape with the loot from a botched robbery and find themselves on the run from the law, from a vengeful cohort, and from Benyon's deadly hit quad. But there's a raw force even more powerful that threatens them on their wild race for the border. When Doc discovers how his liberty was bought, the boundaries of love, lust and greed are put to the ultimate test. Michael Madsen and Jennifer Tilly co-star.
OVERALL
Skip it

Although much has been made of Hollywood's recent glut of bad remakes, the truth is that movie studios have been following this path of least resistance for decades. Second only to the sequel, the Hollywood remake may not be particularly inspired, but it’s certainly bankable. The formula is fairly straight-forward -- combine the instant name recognition of a classic film title with modern stars and a modern sensibility, and you’re generally guaranteed at least a decent opening weekend.

Of course, such cynically conceived films are almost inevitably met with the wrath of critics and other fans of the classic upon which they were based, but clearly over the years the studios have found that the risk is worth the reward.

With that we come to 1994 and the critically abhorred remake of Sam Peckinpah's 1972 classic, 'The Getaway,' starring Steve McQueen and Ali McGraw. Director Roger Donaldson left the title intact, cast then husband-and-wife duo Alec Baldwin and Kim Basinger in the lead roles, and massaged more sex and violence into Peckinpah’s bitter tale of deceit and betrayal.

After spending a year in a Mexican jail, a former "explosives expert" named Doc (Baldwin) finds himself a free man thanks to a deal arranged by his wife (Basinger) with a crime boss named Jack Benyon (James Woods). The deal requires the two to assist in a robbery with a volatile gunman named Rudy Travis (Michael Madsen) and another criminal who may as well be wearing a red shirt (Philip Seymour Hoffman). After the heist fails, everyone scrambles to get away with their lives.

On the road and on the lam, Doc and Carol carry the burden of a sizeable bag of cash taken during the robbery. Adding to their turmoil is Doc's growing suspicion that Carol used more than her wits to get Benyon to free him from prison. The resulting double and triple crosses put them at odds with each other as they try to outpace random police officers, Travis and his new pseudo-girlfriend (Jennifer Tilly), and Benyon's hit squad.

For the record, I hadn't seen the remake of 'The Getaway' before sitting down to watch this HD DVD. Even though I knew that it had been raked over the critical coals, I still somehow believed I was in for something special. After all, Donaldson is the director responsible for 'No Way Out,' 'Thirteen Days,' and 'The World's Fastest Indian' -- three films I enjoy immensely for a variety of reasons. Alas, watching 'The Getaway' ended up being a sobering reminder that even a fine director can still churn out an abysmal film.

The only thing this remake has going for it, in my opinion, is its performances. Basinger is little more than a pretty face, but both Baldwin and Woods chew up the scenery with pathos and rage. Sure, their characters are terribly one-note, but it's entertaining enough just to watch the two actors having such a great time being so despicable. Even better are Madsen and Tilly, who are both genuinely and amusingly off their rockers for the majority of the film. The two dive right into the muck and give it their all, regardless of the ridiculousness of their individual stories and motivations.

Sadly, despite these fun performances, the truth is I couldn't relate to a single person in the entire film. Simply put, the characters are unremorseful bandits that didn't pull me into their worlds for one second. By the time the story climaxed to its Peckinpah- style final showdown, I didn't care who lived or who died. In fact, even after a majority of the characters met their maker, I still found myself wholly unsatisfied with the conclusion. When the credits rolled, I simply shook my head in disbelief.

The list of the film’s ills is seemingly endless -- the directing is clumsy, the pacing is all over the place, and the script is full of cringe-inducing lines straight out of a daytime soap opera. Even the desert cinematography seems emptier than it should. Completely lacking the confidence he brought to 'The World's Fastest Indian' and the sharp dialogue he produced in 'Thirteen Days,' Donaldson’s 'Getaway' is a one trick pony that relies on nothing more than a few Cinemax-style “hot” and "steamy" scenes to engage its audience.

In short, 'The Getaway' failed to stir up any emotions in me other than anger at having wasted two hours of my life. There may be an audience out there who enjoys waiting for the next nipple to pop into frame, but I'd rather experience interesting characters doing things that engage my brain. 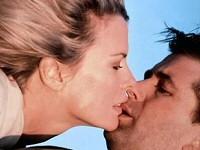 OK, so I hated the film itself, but the transfer on this HD DVD catalog title really surprised me. More than just a simple upgrade from the standard DVD (which is a first generation mess of artifacting, poor black levels, and softness), this 1080p/VC-1 transfer resurrects 'The Getaway' with bold colors, stable contrast, and crisp fine object detailing that at moments even rivals the transfers of a few recent high-profile films released on HD DVD. Just take a look at the texture on James Woods’s tie, the spotted pattern on Jennifer Tilly's dress, and the clouds of dust and rocks that the cars kick up in the desert – this one really shines in high definition.

The palette may be drenched in the colors of soft core sleaze, but skintones remain natural, and depth isn't compromised by crushing issues or poor delineation. There is a fine layer of grain over the image, with the only technical issue plaguing the transfer being a few instances of edge enhancement. I should also note that are a few shots that drift softer than others, but these moments are limited and don't detract from the overall video.

I found 'The Getaway' to be a strong visual achievement, especially considering that it's a lesser-known catalog release that could've easily been swept under the rug by the studio. The quality of the rest of the disc may be questionable, but videophiles who happen to enjoy 'The Getaway' will be extremely pleased. 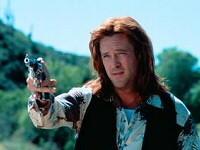 While this HD DVD edition of 'The Getaway' could've featured a double dose of technical glory with the inclusion of a strong audio track, unfortunately this disc’s Dolby TrueHD 5.1 surround mix (48 kHz/16-Bit/3.2 Mbps) simply fails to live up to high-res audio's potential.

The weakest component of the track is the LFE channel -- gunshots feel hollow, engine revs tend to whine, and dialogue lacks the subtle weight provided by a decent bass presence. Making this problem all the more apparent is the track's unfocused directionality and its stiff channel pans. Crowded scenes may sound good at first, but listen closely -- moving elements appear and disappear without logic or consistency. Even worse, occasional effects in the foreground (like a shout from an extra or a ringing phone) will be directed to the rear speakers for no apparent reason. Most of the problems are bizarre and distracting, although to be fair they would seem to reflect the film’s original sound design rather than this HD DVD mix.

On the bright side, there's still enough here to warrant a middle-of-the-road audio score. Dialogue is clear and balanced, ambiance is convincing, acoustics are realistic, and the soundfield spreads widely on occasion. Cars and explosions fill the speakers with an aggressive determination that at least keeps the track bombastic and loud. All things considered, while this track has some serious flaws that tended to pull me out of the film, it's still a solid upgrade from the DVD.

Not a thing -- this release doesn't even include the text-based production notes or talent bios from the standard DVD released in 1998. 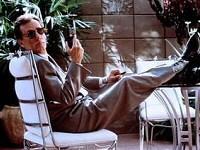 The 1994 remake of 'The Getaway' is a film that relies on nudity and blood to distract viewers from a terrible script and ridiculous characters. Still, fans of over-the-top actioners with plenty of cheap sex and thrills will probably have a good time with this unintentionally campy film. As an HD DVD release, a surprisingly high-quality video transfer is this disc’s most positive attribute, but it can’t make up for a disappointingly average TrueHD track, and a total lack of supplements.

Sale Price 57.97
Buy Now
3rd Party 49.99
In Stock.
See what people are saying about this story or others
See Comments in Forum
Previous Next
Pre-Orders
Tomorrow's latest releases