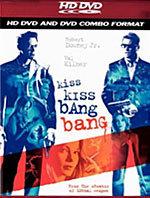 Well, ain't I surprised. 'Kiss Kiss Bang Bang' has all the earmarks of a film that I would, under normal circumstances, despise. It's a postmodern pastiche of genres I don't usually care for (buddy-cop movie, hipster romance, faux-film noir), loaded with self-congratulatory cinema references, too-hip-for-the-room characters, smug Tarantino-esque rat-a-tat-tat dialogue, and directed by the guy who wrote 'The Last Boy Scout' -- not exactly traits that inspire confidence in a traditional narrative-loving, non-ironic guy like myself. So imagine my surprise when I was totally blind-sided by 'Kiss Kiss Bang Bang,' so much so that I'd dare say it is one of the most overlooked and criminally underrated films I've seen in years.

The plot reads on paper like it could have been one of those cringe-inducing first scripts by a film school graduate, the type that precociously borrows from literary source material (in this case, the novel "Bodies Are Where You Find Them" by Brett Halliday), but gives it a pretentious Hollywood-insider spin a la a third-rate 'The Player.' Harry Lockhart (Robert Downey Jr., in another pitch-perfect comic performance) is a small-time hood who, after a botched job lands finds him in an audition for a big movie, unexpectedly finds himself a Hollywood player. But when his high school sweetheart Harmony Faith Lane (Michelle Monaghan, here making much more of an impression than she did in the thankless role of Tom Cruise's girlfriend in 'M:I 3') suddenly shows up on the scene, hoping to land her big break as an actress, Harry is thrust into a complex mystery as sordid as any classic pulp fiction by Raymond Chandler. Teaming up with private detective "Gay" Perry (Val Kilmer, letting every line drip off his tongue like honey), this mismatched pair will find that in real-life, the rules of the game are never quite as easy as they seem on the big screen.

'Kiss Kiss Bang Bang' was written and directed by one-time Hollywood wunderkind Shane Black, and when I say it may sound like an early work by a dangerously young screenwriter, it's true -- the concept had been a passion project of Black even before he sold his first script back in 1986 (a little film you may have heard of called 'Lethal Weapon'). Subsequently toiling for years as a uber-successful but critically derided Hollywood player, he churned out script after script for such arguably soulless hits as the 'Lethal Weapon' sequels, 'The Last Action Hero' and 'The Long Kiss Goodnight,' But then Black staged what has become known as the industry's greatest disappearing act second only to Dave Chappelle, when in 1999 he literally vanished off the face of the Hollywood-centric Earth. For the next six years he wrote nary a single line of dialogue, instead reportedly traveling cross-country in a beat-up Chevy on months-long road trips in a quest for spiritual renewal. (For more on the Shane Black story, read this revealing interview he gave to Movie City News on the eve of 'Kiss Kiss Bang Bang's release last year.)

Now, all of a sudden, he's back from the brink -- and his mysterious disappearance is, in large part, what gives the film a genuine emotional heft its arch-irony would seem to betray. In what has to be the world's first autobiographical postmodern film noir satire of Hollywood hackdom, I think the reason 'Kiss Kiss Bang Bang' manages to leave a true resonance behind is because Black does not use his world-weary cynicism and life-imitating-art-imitating-life plotting to erect a wall between us and his characters. Rather, he has real empathy for these people who, in a less traveled screenwriter's hands, would instead be caricatures engineered solely for our contempt, just another parade of the walking wounded left stranded on Hollywood's boulevard of broken dreams.

Perhaps that's the reason I liked 'Kiss Kiss Bang Bang' so much -- because it is a self-portrait. It is also that true rarity in popular art, the impersonal personal film (if such a thing exists). For the first time, it seems Black is no longer hiding behind his sizable talent -- witness his clever plotting, witty dialogue, bravura intermingling of multiple styles and genres simultaneously -- instead daring to follow the true path of an artist by revealing his soul, however commercial the form it takes. It is not hard to see the Harry character as a slightly inflated alter ego of Black himself (and my how fragile he is, too). As the screenwriter himself has stated in interviews subsequent to the release of 'Kiss Kiss Bang Bang,' he had once felt like his career in Hollywood was an accident, as if he wandered into an unplanned audition as a thief and emerged a star. 'Kiss Kiss Bang Bang' is his chance at rebirth, and if the film is any indication of what is to come then I can't wait to see what he does with the second act of his career. 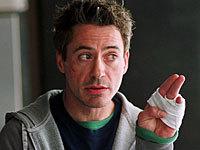 With some of my past reviews, I've received a number of comments via email for being too critical of the use of modern technology to tweak video transfers for home video (it is fairly common today to use computer-assisted techniques to artificially pump up a film's visual presentation, from enhancing color to boosting contrast to reducing film grain). To be clear, I don't have a problem with the practice per se, I just feel that in some cases it can be overdone to the point where the natural qualities of film get obliterated, and the results end up looking more like videogames than movies.

So I'm glad to say that here, all those fancy CGI tweaks have actually paid off, producing a transfer I think is just really, really cool. Though 'Kiss Kiss Bang Bang' on HD DVD has an obviously heightened stylistic feel compared to how it looks projected on film in a cinema, I loved it just the same. This really is an eye-popping image, one with such great depth and vivid colors I couldn't help but just enjoy the sheer act of looking at it, regardless of what was happening on the screen.

The most immediately striking aspect of this transfer is its rich color palette. Rare have I seen such deep hues -- reds, greens and purples just pop off the screen, yet never bleed or look noisy. I also loved how unusual some of the filmmakers' choices were, especially the wielding of cyan like it was a primary color (quite rare a hue in a movie). Detail is also terrific, with a three-dimensional sense of depth throughout that is almost surreal. Sharpness and contrast are top-notch as well. Grain is also never a problem, which is somewhat surprising given how supercharged this transfer's colors are; though a few shots here and there do have a bit of grain present, it only adds to the whole noir feeling of the movie and is entirely appropriate to the material. I really loved this transfer. 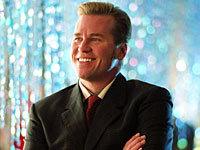 While not as exciting as the transfer, this soundtrack offers a more or less enveloping experience throughout. Though I longed for more sustained ambiance, the action bits boast aggressive surround use with directional effects bouncing all around the soundfield. Dialogue is also nicely balanced with the effects and the score, and this was the rare instance when I wasn't constantly reaching for the remote to adjust volume levels. But most impressive of all is the superior dynamic range on the Dolby Digital-Plus track -- I was really knocked out by how full-bodied the mid- and high-range is, and airtight the low bass. Perhaps I've become jaded after listening to the soundtracks of hundreds of overbearing action films, because it was such a pleasure to hear John Ottman's fabulous jazzy score coming out of my speakers sounding like a great multichannel audio CD, rather than just some sort of muted background to gunfire and explosions.

Another of Warner's new hybrid HD DVD/DVD combo discs, for once the studio has decided to include at least some of the extras on the HD DVD side of the disc (all of Warner's other combo titles have confined the supplements solely to the DVD flipside). But unlike the Blu-ray camp, at least Warner hasn't discarded the extras altogether, so I won't look a gift horse in the mouth.

First up is said audio commentary, with director Shane Black and stars Robert Downey Jr. and Val Kilmer. Certainly, it is the highlight of an otherwise anemic set of extras. As humorous as the film itself, this is one of those tracks that is entertaining enough to make you forget you've just spent another 104 minutes of your life watching the same movie twice. While Black and Downey occasionally veer into the land of the self-indulgent (even as Black humbly notes that his film made "about $1.50" at the box office), it is surprisingly Kilmer -- an actor not known for his flippancy -- who reminds them it is after all "only a movie" and to not take the whole thing too seriously. Short on any real in-depth analysis but loaded with personality, this is a great listen all the same.

The only remaining supplements of note are a four-minute Gag Reel that I wished were funnier, and the film's theatrical trailer presented in 2.20:1 anamorphic widescreen. And as always with their HD DVD releases, Warner also provides real-time menu navigation, a handy chapter bookmark feature and the ability to pan-and-zoom the film's image up to 16x magnification.

'Kiss Kiss Bang Bang' really shocked me. I just wasn't expecting much from this movie other than being a good Sunday afternoon timewaster. Instead, I got a whip-smart, surprisingly resonant comedy-noir-thriller that was inexplicably ignored during its brief theatrical release last year. I was also impressed with the great video transfer and nice soundtrack on this HD DVD. Though I wish there were a few more supplements, I still can't help but recommend this one as a must-buy for fans, and at least a rental if you haven't seen it before.