Though it barely registered as a blip on the cinematic radar outside of France, 'District B13' is an enthralling actioner produced and written by Luc Besson ('The Professional') that showcases a style of pseudo-martial arts called Parkour. Fans of 'Casino Royale' will instantly recognize Parkour from the series of fight-or-flight escape tactics that a henchman employs to escape through a construction site early in that film. Essentially, the art form turns walls, obstructions, and entire cities into gigantic obstacle courses that each runner must traverse in a short amount of time. Rolling, leaping, wall bounding, and scaling are just a sampling of the techniques used to get from one point to another in the most efficient and visceral way possible. While it may sound clumsy, it's actually quite a graceful sight to behold.

Helmed by rookie director Pierre Morel, 'District B13' features Parkour's founder (David Belle) as a man named Leito who resides in the near-future dystopia of Paris, circa 2010. Walls have been erected throughout the city to quarantine crime ridden areas from the general population and District B13 is the worst of the worst. After Leito steals a ridiculous amount of cocaine from a drug kingpin named Taha (Bibi Naceri), his sister (Dany Verissimo) is kidnapped and held until Leito can repay his debt. Following a six month jaunt in prison, the slippery Leito returns to B13 to rescue the girl, destroy Taha's vicious empire, and help an undercover policeman (Cyril Raffaelli) stop a random device that will kill two million people if it isn't disarmed.

When it was released theatrically worldwide, reaction to 'District B13' was mixed -- while many critics enjoyed the visual tour-de-force of each chase scene, most were disappointed by the barebones script and the cookie cutter character development. Indeed, at its worst, 'District B13' is a shallow gimmick flick that only exists to show off Parkour and the insane stuntwork it entails. In this way, the film is reminiscent of many early Jackie Chan movies -- physical entertainment in its base form is certainly prioritized over the need for any kind of coherent storyline. But still, for those expecting this sort of experience, 'District B13' has a lot to offer.

David Belle himself is truly a wonder to watch, transforming Leito into a fury of movement, and bringing the camera to a near standstill as it catches every fluid flick of his limbs. The minimal effects work only bolsters the absence of wires and increases the tension in each scene. And while gunplay and explosions are more central to the story than ultimately seems necessary, they're never a priority.

Ironically, while writer/producer Luc Besson is probably 'District B13's biggest draw, his involvement in the project sets expectations at a level that a film of this sort simply can't fulfill. Known for his more challenging material, Besson's writing in 'B13' lacks the depth of his more serious fare, often sacrificing plot, logic, and consistency in order to move the story along. The sheer ludicrous nature of some of the beats in the film is often pretty laughable -- a six month drug spree victim detoxes in a few hours, gun blazing henchman conveniently cease firing when they close in on their targets, and the undercover cop is an unbelievably convincing master of disguise.

But while the story may largely be left in shambles by the end of 'District B13', these sorts of lapses are typical of such films, and shouldn't deter fans of other better-known releases like 'Crank,' 'The Transporter,' and 'Kiss of the Dragon.'

In the end, while 'District B13' certainly isn't a masterpiece, as a stylized actioner with mind blowing stunts, it definitely delivers. Like Jackie Chan and newcomer Tony Jaa, David Belle has astounding control over his body, and I'm looking forward to seeing more films from him in the future. 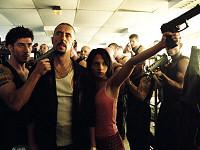 Presented in 1080p using the VC-1 codec, this new HD DVD edition of 'District B13' continues to build on Magnolia's reputation for providing impressive video quality on their releases. Even though the film features a largely washed out palette, examples of color are vivid and bright (especially blues and reds) and the contrast levels are stylized and beautiful. Daytime scenes look great and the sunlight doesn't rob the image of detail or depth. Black levels are wonderful, shadow delineation is above average, and fine object detail is crisp. Textures have dimension and the image on the whole feels invitingly natural with vibrant skintones and sharp edges.

I actually found myself enjoying this HD DVD transfer slightly more than the MPEG-2 Blu-ray transfer released a few months ago. The image is mildly sharper and feels more stable all around. I was expecting the two transfers to be identical, but (to my eyes) a side-by-side comparison gives the slight edge to the new HD DVD version.

There are still a few minor problems -- color banding occasionally appears in open expanses, darkness is sometimes sprinkled with noise, and the stark contrast is artificially pushed to the extreme in a handful of scenes. For the most part, however, these issues are infrequent and don't distract from the overall picture quality too much. 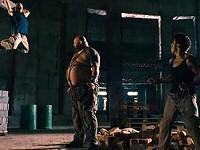 But while the TrueHD track is exclusive to this HD DVD, it's limited to the English dub, which is a bit of a hollow trophy, since the dub itself suffers from sync issues and amateur voice work. Equally as annoying, the English SDH subtitles describe every sound effect on the screen, making this is a case where those who studied French in high school really win. Fans complained about this issue so much with the Blu-ray edition that really I'm surprised to find that Magnolia didn't address this concern before releasing the HD DVD.

On the bright side, the technical sound quality is quite good on the French track. Dialogue is crisp, gunfire is explosive, and subtle ambiance is remarkable considering the action-oriented nature of the film. Dynamic range tones push the mixes to stable extremes, channel movement is natural, and accuracy is dead on. All of the tracks make good use of the surround channels and the soundscape is busy throughout. Best of all, impacts, shattering environmental elements, and punches are earthy and realistic. Each shard of breaking glass can be heard tinkling on the ground and every piece of splintered wood sounds different than other pieces. Volume levels are realistic, with quieter sounds at a lower volume than sounds that should be louder. It may seem like a simple thing, but a lot of action flicks ignore prioritization details and annoyingly reproduce sounds like reloading clips at the same level as a gun firing.

My only major technical disappointment was with the treatment of the baseline techno soundtrack, which is often prioritized above more important elements in the soundfield. A less crowded sound design would likely have given the sound effects that much more oomph. 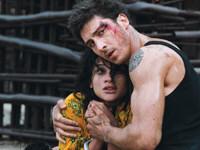 Aside from a decent behind-the-scenes documentary, the supplements on 'District B13' aren't terribly engaging. The "Making Of" doc totals 49 minutes and is divided into five sections - "Preparation," "The Casino," "The Shoot," "Parkour," and "The Actors." The director, screenwriters, and stars pop up for interviews and share plenty of details and anecdotes. While the doc sometimes veers a bit too much into the promotional category for my taste, its content is interesting nonetheless. Fans will definitely enjoy the footage of the actors working on the stunts and action sequences, and David Belle & Cyril Raffaelli are great fun to watch as they up the ante, often making scenes far more visually arresting than they were originally intended.

Beyond that, there's a slightly "Extended Fight Scene" and a short group of "Outtakes." The fight extension is surprisingly dry and only adds a few extra beats and beatdowns to the Casino scene. The outtakes, meanwhile, are ordinary, unfunny, and too repetitive to waste time on. 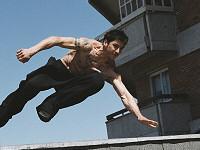 Fans of plotless martial arts extravaganzas should feel right at home with 'District B13,' ignoring the film's shortcomings to enjoy the insanity of the film's amazing Parkour runs. As an HD DVD release, the video quality on this one is quite impressive and slightly cleaner than the Blu-ray edition. The audio packages are also very nice -- the only thing spoiling the fun here is a weak set of supplemental offerings.

Sale Price 36.6
Buy Now
3rd Party 36.6
In Stock.
See what people are saying about this story or others
See Comments in Forum
Previous Next
Pre-Orders
Tomorrow's latest releases