For Love of the Game

Overview - Legendary Detroit Tigers pitcher Billy Chapel (Kevin Costner) has always been better at baseball than at love. Just ask Jane (Kelly Preston), his on-again, off-again girlfriend. At the end of a disappointing season, just before what may be the last professional game of his life, Jane tells Billy she's leaving him. Now, with his career and his love life in the balance, Billy battles against his physical and emotional limits as he plays the game of his life. And now with every pitch, Billy comes closer to making the most important decision of his life. The suspense doesn't end until the last ball is thrown in this heartwarming drama about love, life and the perfect game.
OVERALL
Worth a Look

Kevin Costner has a long-standing love affair with baseball -- his cinematic canon includes a trio of films that explore the heart, soul, and spirit of America's favorite pastime. 'Bull Durham' examines the sport's dark and hilarious underbelly, 'Field of Dreams' leaves stone-faced men in shambles, and 'For Love of the Game' paints an intimate portrait of life and love. (He even plays an ex-baseball player in ‘The Upside of Anger.”) But while 'Bull Durham' and 'Field of Dreams' are steeped in baseball lore, 'For Love of the Game' is an introspective romance that attempts to appeal to more than just baseball buffs.

The film itself tells the story of Billy Chapel (Costner), an aging pitcher for the Detroit Tigers who steps onto the mound for the last game of his legendary career. In the moments before the game, Chapel finds himself overwhelmed by a sudden mid-life crisis as his girlfriend (Kelly Preston) decides to leave him for a job in London, and the team's owner informs him of his impending trade. As the game opens at Yankee Stadium, Chapel stares into the eyes of the determined batters half his age and begins to reminisce about his career and the only woman he's ever truly loved.

Told through a series of flashbacks, 'For Love of the Game' is a quiet film that seems to pride itself on character development and the portrayal of frank, realistic relationships. Director Sam Raimi ('Evil Dead,' 'A Simple Plan,' and the 'Spider-Man’ series) invites the viewer to witness the rise and fall of a seemingly simple but truly complex man. There are some tough scenes between Costner and Preston that are so painful that they're uncomfortable to watch. Perhaps surprisingly for a director who often works in the horror and fantasy genres, Raimi creates the core of a credible human relationship.

Likewise, the actors deliver heart-aching performances that pack genuine emotional impact. Costner is perfect as a washed up outcast who once held the limelight. His performance is built upon giving Chapel a carefully-modulated self-destructive temperament and a series of subtle glances. Preston is equally impressive and infuses an undercurrent of her character’s independence into her performance. Their chemistry gives the film a much-needed boost, even when the story lacks momentum.

On the downside, 'For Love of the Game' takes far too long to get where it's going. While the third act provides a satisfying conclusion to the set-up, Raimi spends too much time trying to entertain two opposing audiences. The baseball elements are mere window dressing (until the last half hour), and as such, sports fans are likely to find themselves repeatedly looking at the clock. Similarly, those more interested in the film’s more romantic elements are likely to be turned off by its frequent flashes to the baseball diamond. As a result, the film has a difficult time appeasing either of its target audiences.

I have no doubt that 'For Love of the Game' has an appreciative fan base that will argue with me about how much the film succeeds in being a baseball movie and a romantic drama. However, despite the film’s strong performances and complex human relationships, but ultimately I found myself bored with the slow pacing and divided narrative purposes. 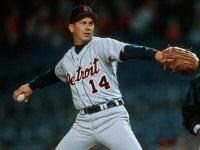 While the film itself may not be immediately engaging, I found the 1080p/VC-1 transfer included on this HD DVD release almost wholly gratifying. Fleshtones are nicely saturated, and colors (particularly greens and blues) are bolstered by a welcome level of stability and vibrance. Fine object detail is also exquisite, with even the checkered texture of the pitcher's mound and the small flecks of dirt scattered on top of the white base lines plainly visible. Black levels are inky, delineation is forgiving, and the darker areas of the picture aren't plagued by any source noise. Best of all, object edges are crisp without relying on edge enhancement -- halos are thankfully absent from highly-contrasted shots, and the image has a filmic quality that's easy on the eyes.

There is a moderate veil of grain on top of the picture, but it rarely interferes with the image quality. The print has been suitably preserved as well -- there are a few nicks here and there, but the majority of the film is very clean. Overall, I really don’t have many complaints, and I'm starting to really warm up to the idea that Universal is finally on the right track with their catalog releases. 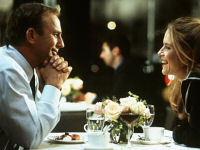 The audio package is equally strong, if not a bit more impressive. Once again, Universal has smiled upon early adopters, providing a fantastic Dolby TrueHD 5.1 surround mix (48 kHz /16-Bit /3 Mbps). The film dominated by long stretches of dialogue, but surprisingly, even these scenes manage to shine sonically-- the pitchy crack of Costner and Preston's strained voices are expertly reproduced across the front channels without a hint of wavering or source inconsistency. The sound designers have also seen fit to layer the rear channels with plenty of ambient echoes that make interior acoustics extremely convincing.

That being said, the real meat of this TrueHD track is on display in the crowded stadium scenes. Each speaker comes alive, anchored by a rumbling presence in the LFE channel. Pans and movements are flawless as the crowd roars and as the players speak and cheer. These moments immersed me in the soundfield, and I had a great time listening to a variety of elements bounding about the soundscape.

The only minor criticism I have is that a handful of subwoofer beats don't resonate quite as fully as others (you'll occasionally notice two or three of these slight discrepancies when a ball hits the catcher's glove, for instance). Still, it's hardly distracting and only hinders the audio score due to the frequency with which it occurs. Overall, this TrueHD track is likely to please film fans and demanding audiophiles alike.

Unfortunately, the one real disappointment of this release is its feeble supplemental package. While it does include all of the significant features from the standard DVD (minus the text-based production notes and DVD-ROM content), I think that the film could have really benefited from a commentary track with Raimi or Costner.

Instead, we’ll have to content ourselves with a "Spotlight on Location" featurette (19 minutes) populated by a good chunk of behind-the-scenes footage, a collection of repetitive and aimless "Deleted Scenes" (20 minutes), the film's theatrical trailer, a text-based account of 18 no-hitters throughout baseball's history, and an "On the Mound" quiz. As a bonus, answering all of the questions correctly unlocks a short film about Babe Ruth from 1931 called "Slide Baby Slide." To my embarrassment, I continually missed questions.

(Note that the all of the supplemental video features listed above are presented in pillar-boxed 480i/p video only.) 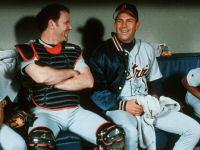 Your enjoyment of 'For Love of the Game' is likely to depend on your patience with the film's plotting –- simply put, it can be mind-numbingly slow. On the bright side, those who do stick around will be treated to excellent performances and a solid script. As an HD DVD release, this one's quite strong, featuring a top-notch video transfer and a powerful TrueHD audio mix. The only thing that hinders this disc is a relatively thin set of supplements. Even so, the upgrade to the video and audio make this one and easy recommend for fans, and worth a look for all.

Sale Price 29.94
Buy Now
3rd Party 29.94
In Stock.
See what people are saying about this story or others
See Comments in Forum
Previous Next
Pre-Orders
Tomorrow's latest releases