Overview - Top Gun takes a look at the danger and excitement that awaits every pilot at the Navy's prestigious fighter weapons school. Tom Cruise is superb as Pete "Maverick" Mitchell, a daring young flyer who's out to become the best of the best. And Kelly McGillis sizzles as the civilian instructor who teaches Maverick a few things you can't learn in a classroom.
OVERALL
For Fans Only

Pity the poor, revisionist legacy of 'Top Gun,' the highest-grossing film of 1986. Is it a masterpiece of populist, mainstream American moviemaking, or the most crap-tastic ode to '80s overindulgence ever put on film? Beloved by audiences upon its original release and praised by the military as the greatest recruitment film ever made, the film is hated by critics and has been lampooned by no less than Quentin Tarantino as the pinnacle of unintentionally campy homoeroticism. Truth be told, it's such an empty spectacle that it may just be the Rorschach test of cinema -- what you get out of it is exactly what you bring to it.

Like the rest of the western world, I too succumbed to the 'Top Gun' phenomenon in the summer of 1986, but while I thoroughly hated it at the time, twenty years later I can now embrace it as a movie so steeped in pretentious excess that it's not only hilarious, but it's downright heartwarming. The film's sheer transparency is arguably what makes it so endearing. The filmmakers don't even appear to try to disguise the narrative machinations -- instead, they seem to revel in them. The definition of cinematic style over substance, it's impossible to suspend one's disbelief while watching 'Top Gun' by ignoring the cliches, because the entire movie itself is a cliche.

It's hard to remember which came first -- Tom Cruise the superstar, or 'Top Gun.' As the film's Maverick, Cruise immediately went from that hot up-and-comer from 'Risky Business' to A-list icon the moment 'Top Gun' opened in theaters. Even if I want to bash Cruise's toothy, mega-watt smile into the roof of his cockpit throughout 'Top Gun,' I can't deny that only an actor of such youthful, cocky bravado could have anchored a movie as narratively paper-thin as this one.

If Cruise is about the only thing in 'Top Gun' with any genuine spark, his Maverick is a checklist of conventions. Every character development and contrived emotion seems ripped right out of the pages of Hollywood Screenwriting 101. A brash young fighter pilot, Maverick must confront his dead-daddy complex or risk self-destruction (check). Although his beautiful flight instructor (Kelly McGillis) will initially resist advances, ultimately their animal attraction will prove too strong to ignore (check). Maverick's bend-the-rules flying machismo will incur the wrath of rival pilot Iceman (Val Kilmer), until real-life peril will force them to work together to overthrow the enemy (check). And Maverick's straight-arrow best friend Goose (Anthony Edwards) will temper his reckless behavior and help soothe the ire of their frazzled superior (Tom Skerritt), until airborne tragedy will force Maverick into a last-minute crisis of faith before the third act climax (check).

As directed by Tony Scott ('True Romance,' 'Deja Vu,' 'Crimson Tide'), 'Top Gun' was certainly visually arresting back in 1986. Scott uses every MTV-era trick in the book to vapid effect, utilizing quick-cut editing to create faux-tension in scenes where nothing dramatic is actually happening, and laying on the perfume-commercial cinematography so thick that even mere dialogue scenes look like a soft-core porn. But more than any other film of the '80s, 'Top Gun' is responsible for ushering in the era of the "music video movie." The inevitable soundtrack tie-in spawned such monster hits as Kenny Loggin's "Danger Zone" and Loverboy's "Heaven in Your Eyes," and the accompanying music videos made the songs inseparable from the flick -- it is possible to not be reminded of Cruise and McGillis making sweaty goo-goo eyes at each other every time you hear Berlin's Oscar-winning "Take My Breath Away?"

But as visually slick as it may be, 'Top Gun's highly-touted aerial dogfights always rated as a disappointment for me. I remember how ballyhooed Scott's supposedly pumped-up action was at the time, but really all we get are a bunch of close-ups of the actors barking orders at each other from their cockpits and endless shots of the underbelly of fighter planes flying in random directions. Scott does nothing to establish location, geography or even basic screen direction, and if it wasn't for the overbearing engine sounds revving on the soundtrack, there would be no adrenaline at all. These guys are supposed to be flying in the danger zone, but the combat scenes feel about as dangerous as an Atari game.

Although 'Top Gun's legacy at this point is arguably more about its success than what it's about, the film itself is not without its charms. In fact, I probably enjoyed the movie more on HD DVD than I ever have before, albeit not exactly in the way intended. Depending on your perspective, 'Top Gun' is either a landmark in modern commercial moviemaking, or one of the key turning points when Hollywood cinema officially went down the crapper. Regardless, viewed through the glowing haze of nostalgia, it's hard not to have fun revisiting this one so many years on. 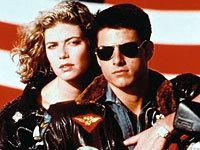 'Top Gun' hits HD DVD three years after the flick's most recent standard-def DVD release, and both discs appear to share the same master (even the dirt speckles are in the same place). Still, that's not an entirely bad thing -- this was my first experience seeing either edition, and I have to say I was impressed with how great this film looks over twenty years after it first hit theaters.

Paramount offers up a 1080p/AVC MPEG-4 transfer in the film's original 2.35:1 aspect ratio, and my only real complaint is the source print is not quite pristine. There is a bit of the aforementioned dirt, and a white speckle here or there. Some wavering is also visible, with uneven contrast in a fair number of shots. Likewise, the aerial photography is inconsistent, with what looks like a few stock footage shots suddenly suffering from excessive grain, fuzzy colors and flat depth.

Otherwise, 'Top Gun' is aces. Blacks are wonderfully inky, and contrast is bright and appealing without being excessive. The film was shot with some of that soft-filter haze that was so popular in the '80s, yet this transfer remains strikingly sharp. Colors are also far better than I expected, with robust, clean primaries (reds are particularly intense, with Kelly McGillis' lips ripped right out of a Maybelline ad), while depth and detail are also very palpable, with the vast majority of the film's runtime looking quite three-dimensional.

It may not be absolutely perfect, but the picture quality on 'Top Gun' ranks a solid four-stars, and is easily one of the better recent re-issue efforts from Paramount.

Though it lacks the extra matrixed surround channel, overall I enjoyed the Dolby TrueHD track the most. Clarity and depth of sound is superior. The subwoofer delivers excellent bursts of low bass, that holds quite tight with only the deepest rumblings flattening out a bit. Surrounds are lively and engaged during the aerial dogfight sequences. Better heft and power to the rears on the TrueHD matched the DTS-ES mix, although imaging may be a tad smoother on the latter. Even non-action scenes have some pronounced atmosphere, which isn't always the case on older catalog titles. I only wish the pop/rock tunes were bled a bit more to the surrounds -- the tunes sound like plain stereo, and seeing they are so integral to the success of 'Top Gun,' they really should have been better integrated and balanced in the mix. Otherwise, this is a very strong presentation.

I should mention that I noticed one strange audio anomaly on this disc. At approximately the 55:11 mark, right at a cut from a shot of Kelly McGillis in bed staring at a note to a shot of Maverick walking with a group of fellow fighter pilots, there is a prominent dropout of the soundtrack. Berlin's "Take My Breath Away" plays in the background, and about a half-second too early before the video cuts, the audio simply cuts out. It's like the jarring audio silence you hear during a layer change on a standard-def DVD, only the video holds tight.

We've contacted Paramount to get a response on the potential defect, and will report as soon as we receive official word. In the meantime, if any readers have experienced the same problem with the disc, we've opened a dedicated thread for 'Top Gun' (linked below) where you can discuss the issue.

What an unfortunate surprise. 'Top Gun' hit standard-def DVD few years back as a full-on special edition, complete with audio commentary and a two-hour documentary boasting a rare retrospective interview with Tom Cruise. So why Paramount has decided to not include a single extra -- not even a trailer -- on the film's high-def debut is a head-scratcher. In the past they've been a studio that has almost unilaterally supported extensive supplements on high-def, so I can only that 'Top Gun' is an anomaly and not indicative of some larger change in policy for the new HD DVD-exclusive Paramount. Cross your fingers.

'Top Gun' is a pretty silly film, and twenty years on, it's not hard to view it as pure unadulterated camp. That's probably a good thing, at least for viewer with my perspective, as it makes for a more entertaining if still ultimately unfulfilling experience. This HD DVD also yields mixed results. I was pleasantly surprised by how terrific it looks and sounds, but what's with the complete lack of extras, Paramount? I wish I could recommend 'Top Gun' wholeheartedly, but sans extras, this one's probably best reserved for die-hard fans only.

Sale Price 15.6
Buy Now
3rd Party 69.99
In Stock.
See what people are saying about this story or others
See Comments in Forum
Previous Next
Pre-Orders
Tomorrow's latest releases