Perfume: The Story of a Murderer (German Import)

Originally published in 1985, Patrick Suskind's international bestseller "Perfume: The Story of a Murderer" has been a long time coming to the big screen. Over the years, a horde of filmmakers (including Stanley Kubrick, Martin Scorsese, and Ridley Scott) have all tried to develop cinematic adaptations, only to walk away, with Kubrick famously declaring the novel "unfilmable". In 2006, director Tom Tykwer ('Run Lola Run,' 'The Princess and the Warrior) thought otherwise and finally committed Suskind's twisted take on obsession to celluid.

The film tells the tale of Jean-Baptiste Grenouille (Ben Whishaw), an orphan born in the fish markets of 18th Century France with an inhuman sense of smell. He can identify the source of any scent, recreate perfumes on a whim, and even trail individual human phermones through the dense stench of the streets, but when he accidentally kills a young woman, he finds himself enthralled by the aroma of her death and he sets out to create a perfume that will capture this unique odor. Attaching himself to a wealthy perfumer named Giuseppe (Dustin Hoffman), Jean-Baptiste ultimately embarks on a dark journey that will leave a trail of bodies in its wake.

Narrated with grace by John Hurt, 'Perfume' is a dark fairytale in every sense of the term. The film's lush imagery is decidedly surreal, but the supporting actors help to create a convincing sense of dread and the lead performances are grounded and surprisingly genuine.

Critical reaction to 'Perfume' upon its theatrical release was split down the middle -- some adored the story's unique premise, while others found it to be utterly ridiculous, especially in the film's fanciful third act. For me, the narration made it immediately clear that I was watching a fairytale and I found everything that followed easier to swallow as a result. While some have found the film's imagery uncomfortably stark and disturbing, I only found it to be unsettling. The actual depicted violence is brief and contained -- instead, it's the tonal darkness of the story that really made me squirm in my seat.

To be sure, 'Perfume: The Story of a Murderer' isn't a perfect film. It often seems to struggle to find its own identity, and viewers less willing their disbelief are likely to find it impossible to immerse themselves in the story. Personally, I also took issue with the film's brief inclusion of Dustin Hoffman. Although his performance is clearly meant to add a lightness to the weight of the story and generally hits the right notes, I found his faux-French accent overly distracting. Considering the fact that other actors in the film (Alan Rickman chief among them) seem to make no effort to disguise their own accents, I don't understand why Hoffman wasn't allowed to maintain his natural voice.

In the end, 'Perfume: The Story of a Murderer' certainly isn't for everyone, and a good number of viewers are likely to give up soon after it begins its bizarre third act. However, fans of films like 'American Psycho' should have an easier time embracing the madness on quiet display. For my own part, the increasingly unsettling tone of this film grabbed me from the opening birth of Jean Baptiste and refused to let go until his journey was complete. 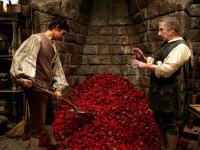 Presented in 1080p using the VC-1 codec, the picture quality on this German HD DVD import of 'Perfume: The Story of a Murderer' is simply stunning. Boasting vivid colors, strong reds and blues, and a stable palette that's well saturated, the roses in the perfumer's shop look like a painting. Fine object detail is equally remarkable -- just look at the crowd in the opening scene and the long shots of the cities. Every individual in the streets is clearly distinguishable and sharp. The black levels are deep and add a nice amount of dimension to what could have been a flat, shadowy picture.

Most impressive of all is the texture detail. Facial close-ups, each actor's pores, and every strand of hair is crystal clear. Shots that follow the trail of a scent are also rendered wonderfully -- in fact, they're so detailed at times that you almost feel as if you've been put within the mindset of Jean Baptiste himself.

As strong as this transfer is, I did notice a couple of minor issues. First off, there's some occasional color banding present around unfocused edges (look at the close-up of the child's finger in the orphanage). Secondly, some random shots of darkness have a slight cloud of artifacting (watch the night sky when Jean Baptiste stares across the water at the city). I should emphasize that these issues only pop up a handful of times, and they hardly mar this otherwise gorgeous transfer.

All things consdered, HD DVD fans looking for an early copy of 'Perfume: The Story of a Murderer' won't be let down by the visuals on this German import. This one's a winner. 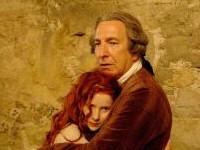 'Perfume: The Story of a Murderer' features a German dubbed mix and an original English language track, both of which are presented using DTS-HD 5.1 surround (1.5 Mbps). Although the menus on this HD DVD import are in German, switching to the English language mix is a cinch. Simply select "Einstellungen" from the main menu, choose "Englisch DTS-HD 5.1," and then click "Ohne Untertitel" to turn off the default German subtitles. Now click on "Film Ab" to watch the movie.

While the film's stellar video transfer enabled me to further immerse myself in 18th century France, unfortunatelty this audio package did not. To be fair, there's nothing technically wrong with this mix -- it's just dominated by Hurt's narration and the film's musical score. The surround channels aren't used to their potential, dynamics are weak, and the soundscape is relatively quiet.

On the bright side, the score's instrumentation is warm and well prioritized, dialogue is crisp (even during soft whispers), and channel movement is subtle. Here's hoping that the eventual US high-def release builds on these strong suits and delivers a more immersive overall aural experience.

This HD DVD import comes packed with extras, but unfortunately for us English-language speakers, all are presented in German, the native language of the film's director and production staff.

Included are three commentary tracks (each uses Dolby Digital 2.0) -- the first with director Tom Tykwer, the second with production designer Uli Hanisch and her assistant Kai Karla Koch, and the third with director of photography Frank Griebe and editor Alexander Berner. Beyond the commentaries, there's a twelve minute behind the scenes featurette, forty minutes worth of crew interviews (one of which is in English), and a group of bios for the actors involved.

Since we review import discs based on their value for English-language audiences, this supplemental package doesn't earn any stars, but if you do speak German, this would seem to be a strong offering, so adjust your own personal score accordingly. 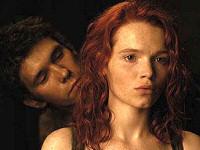 'Perfume: The Story of a Murderer' is a fascinating and surreal exploration of a demented mind. Fans of the film are sure to be impressed by the visuals on this German import HD DVD, but unfortunately the audio is nothing special and all of the supplements are presented in German. Priced at £28.89 (roughly $40 USD) via Amazon.de, that's a lot of money to spend, considering what you're getting in return. Unless you're a huge fan of the film (or fluent in German), I recommend waiting to see if a domestic high-def version pops up before dropping the cash on this import.

List Price $39.62
Go To Store
See what people are saying about this story or others
See Comments in Forum
Previous Next
Pre-Orders
Tomorrow's latest releases