Overview - Out for action? You found it! Steven Seagal hits the target like nobody else in this pounding police thriller. Brooklyn-born cop Gino (Seagal) has seen many changes in “the neighborhood.” One sad one is that boyhood adversary-turned-criminal scum Richie (William Forsythe) has turned local streets into war zones. He’s a mad dog unleashed and Gino and his world-weary partner (Law and Order’s Jerry Orbach) must hunt him down before the body count multiplies.
OVERALL
Skip It

Nobody seems to understand Steven Seagal anymore. Is he an actor? A martial artist? A singer? An environmental activist? His bizarre Hollywood career seems to have run the gamut, making him more of an inside joke than a legitimate performer. But once upon a time, Seagal dominated the box office with action flicks that brought his dry-delivery of justice to the masses. He first arrived on the scene with 'Above the Law' and subsequently released three films that opened at number-one at the box office -- 'Hard to Kill,' 'Marked for Death,' and 'Out for Justice.'

'Out for Justice' tells the straight-forward story of Gino Felino (Seagal), a hard-faced NYPD detective who works to keep the streets safe from scumbags like his childhood nemesis, Richie Madano (William Forsythe). Felino plays by the rules until Madano kills his partner and best friend, Bobby (Joe Spataro). With no other avenue for justice, Felino takes matters into his own hands and becomes determined to kill Madano no matter what the cost.

I was obsessed with films like this when I was a teenager. When it came down to scheduling reviews for this month, I specifically requested 'Out for Justice' to be added to my list -- what better way to relive the nostalgia of former favorites than to review them?

Much to my dismay, the years haven't been kind, and a lot has changed in cinema since this film was released in 1991. The last time I watched 'Out for Justice,' the martial artistry was impressive, the gunplay was tense, and the dialogue brought cheers from me and my friends. Watching it today, the fight scenes are underwhelming and stocky, the gunplay is overdone and laughable, and the dialogue made me cringe at almost every turn.

Fans of '80s action flicks will find more of what they love here -- but 'Out for Justice' hardly qualifies as one the era's classics. In fact, much of the movie plays like a low-budget straight-to-video release, simply boiling down to an adolescent's revenge fantasy where base morality defines behavior and the protagonist never pauses to seriously consider the implications of his actions. Needless to say, the violence is gratuitous and Seagal's performance fails to stir up any empathy for his character.

With that in mind, 'Out for Justice' can be certainly be enjoyed as a relic of its genre, but little else. More than fifteen years later, I found it to be predictable, plodding, and mind-numbingly mediocre compared to better actioners from the same time period.

So, consider yourself warned: fans of 'Out for Justice' should be wary if they haven't seen this one in a while, as they may find (as I did) that it's not everything you remember. Newcomers should probably just steer clear of this one altogether and find better classic catalogue titles on high-def. 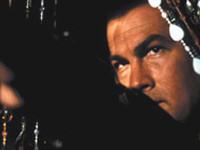 Even hardcore fans who enjoy 'Out for Justice' for what it is are likely to agree that the picture quality on this disc takes a disappointing left turn after the film's first act. Presented in a 1080p/VC-1 transfer, things look respectable as 'Out for Justice' gets rolling -- colors are above average, the contrast is fairly stable, and fine object detail is impressive (especially compared to the hazy 1999 standard-def DVD). The print does show some wear and the film suffers from light softness, but I was ready to give this one an above-average rating since it looked quite good for a film of its era.

Unfortunately, the video quality declines dramatically as the film moves to nighttime shots and scenes with lower lighting, exhibiting poor shadow delineation, crushing, and consistently distracting bouts of heavy noise. As the noise increases, detail and depth decrease, with the end result being an unattractive picture that has severe technical problems. I acknowledge that the daytime scenes look pretty good, but their attributes only serve to highlight the deficiencies in the rest of the presentation.

The film comes on a single layer, 15GB HD DVD disc and could probably have benefited from more disc space and/or a more thorough remastering for high-def. Why studios continue to drop catalogue titles like this on either HD format without properly preparing them for the visual scrutiny of high definition is beyond me. 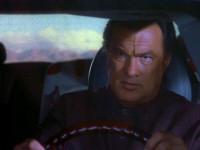 The audio on this HD DVD isn't much better than the video, although it does sound a tad crisper than its standard DVD counterpart. However, the Dolby Digital-Plus 5.1 mix (1.5 Mbps) featured on 'Out for Justice' just doesn't have the audible punch to match its on-screen violence. Dialogue is clear, but isn't very well prioritized within the soundscape (a hindrance particuarly noticeable in gun battles). Making matters worse, sound effects are stagey and lack proper support from the subwoofer -- shotguns sound hollow, explosions sound watery, and splintering wood occasionally sounds like plastic. Everything sounds as if it's being bottle-necked by its dependence on the center channel, and dynamics falter as a result.

Granted, most of these issues can be blamed squarely on the film's poorly constructed sound design. I doubt anyone will be expecting a more impressive track considering the source material. However, the promise of high-def audio is to improve the overall aural experience with significant upgrades in addition to an increase in the bit-rate, and on that count unfortunately this HD DVD edition of 'Out for Justice' fails to deliver.

Nothing of substance to report here. Like its standard DVD predecessor, this HD DVD release of 'Out for Justice' includes just one supplement -- the film's original theatrical trailer, presented in standard definition 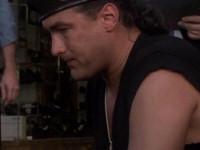 My hopes of reliving a "classic" from my childhood were dashed within the first half-hour of 'Out for Justice.' It was painful to realize that this is what passed for great cinema when I was a freshman in high school. Sadly, even hardcore fans of the film are likely to be disappointed with this HD DVD's mediocre video, basic audio package, and lack of supplemental features. Unfortunately this one seems to have been plopped onto high-def without much consideration for the technology or the film itself.

Sale Price 7.57
Buy Now
3rd Party 7.57
In Stock.
See what people are saying about this story or others
See Comments in Forum
Previous Next
Pre-Orders
Tomorrow's latest releases