Overview - Cate Blanchett, Golden Globe winner for Best Actress in a Drama, along with Geoffrey Rush, Richard Attenborough and John Gielgud lead a remarkable cast in a thriller of intrigue in the court of one of history's greatest monarchs, Queen Elizabeth I.
OVERALL
Recommended

The story of England's Queen Elizabeth I is the stuff of legend. Born into a culture that viewed women as little more than property and allowances, the willful female monarch injected a welcome dose of progress into a stiflingly stagnant culture during her reign from 1559 to 1603, contending all the while with a barrage of conflicts, attempted coups, and rebellions. Yet while the sheer volume of filmable material from the queen's reign is awe-inspiring, over the decades she has rarely been portrayed on film as more than a minor, misunderstood character.

That changed with the award winning 1998 release of 'Elizabeth,' a sweeping exploration of the life and times of the "once and future queen," helmed by Indian director Shekhar Kapur. Focusing on Elizabeth's early years in power, the film examines the influences and politics that shaped her reign, as well as the personal struggles of the pale-faced "virgin queen" that has been depicted in so many paintings and history books over the last four hundred years.

The film begins with the cancerous deterioration of Mary I (Kathy Burke), an irritable Catholic ruler who is forced to leave the throne in the hands of her half sister -- a wide-eyed protestant girl named Elizabeth (Cate Blanchett). The new queen is given a crash course in ruling a kingdom with the help of a loyal advisor (Geoffrey Rush) who wisely introduces her to the countless enemies that wish her harm. At the same time, she has to deal with an endless chain of suitors vying for a place by her side, all power-hungry elitists who fail to stir up the same emotions that she feels for her childhood love, Robert Dudley (Joseph Fiennes).

Although she faces a variety of challenges, one of her greatest threats comes in the form of the Catholic church, furious at the sudden rule of a Protestant. Over the course of the film, Elizabeth must contend with a traitorous loyalist to the Church (Christopher Eccleston), greedy and aggressive attacks from France, and the ruler of Scotland (Fanny Ardant) who wants the throne for herself.

Widely praised by critics and audiences alike, 'Elizabeth' is probably best known for its performances -- and not without good reason. Blanchett, Rush, and Fiennes all craft engrossingly complex renditions of their characters worthy of their numerous nominations and awards. Simply put, this is one of those rare films where I forgot I was watching a group of actors and instead found myself immersed in another time and place.

Of course, it doesn't hurt that the sets, costumes, and photography are filled with earthy textures and intricate details that bring 16th century England to life. I'm not the kind of guy who usually comments on this sort of thing -- if I don't notice shoddy production work, I generally take design elements like these for granted. But the world presented in 'Elizabeth' is so rich that I simply couldn't get over the authenticity of this gorgeous fabrication.

Matching the film's top-tier performances and design asthetic is a dark script with palpable momentum that makes this rather lengthy character study seem much shorter than it is. There are any number of intriguing, psychological layers to the film that always keep my brain working even when the camera is sitting still.

In the end, my only issue with the film (and it's admittedly a nitpick) is that Kapur takes a number of serious liberties with history. I understand this is necessary to streamline a film of this sort, but it's frustrating that the director hinges Elizabeth's ultimate character arc on one of these alterations (the historical Elizabeth was well aware of the fact that Robert Dudley was married). Still, this is a minor point that's likely to only distract students of history -- film fans will be largely unaffected and are almost sure to enjoy the story on its own merits.

A cinematic tour de force that combines sublime acting with flawless art direction and a great script, 'Elizabeth' deserves every ounce of critical acclaim it has amassed over the years. I'm jazzed about the under-the-radar sequel hitting theaters this October, which promises to explore the latter half of the queen's reign (and will happily reunite Kapur with Blanchett and other original cast members). Newcomers will find a lot to love here, and I certainly suggest watching this film before tackling the sequel. 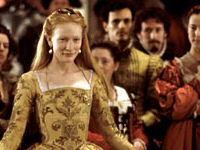 Among the transfer's many positives is a lush palette that's home to a full spectrum of gorgeous colors that aren't bothered by contrast wavering or edge instability. Deep blacks help imbue the image with an impressive level of depth and exterior scenes have a discrete pop, and detail also doesn't disappoint, with intricate textures and backgrounds that remain crisp regardless of the camera's focus. Finally, a clean source that doesn't exhibit artifacting or crushing of any kind.

On the less positive side, a host of smaller issues combine to knock this one down a notch overall. Paramount among these issues are several instances light edge enhancement (seemingly left over from the DVD treatment), a limited number of softer shots, and a handful of instances in which dark scenes are disturbed by video noise. Also, I occasionally found skintones to be irregularly flush with a pink hue, giving the actors a fevered appearance (note that this could well be an intentional choice on the part of the director, but I've mentioned it here as I personally found it distracting).

To be sure, all things considered, this is still a relatively strong presention -- it just could have used a hair more polish. 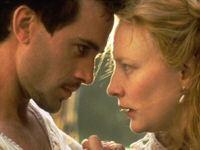 Mostly conversation-driven, 'Elizabeth' is hardly a barnstormer of a flick. Still, even if most of the soundscape is contained within the front channels, the Dolby TrueHD 5.1 surround track (48kHz/16-Bit/2.5Mbps) on this HD DVD handles what it's given with great ease.

Dialogue is stable, balanced, and clear, spreading sound across the front channels while taking advantage of the rear speakers to create believable environmental acoustics. Just listen to the echoes and surround effects in the variety of cathedrals and castle halls that populate the film -- the notably accurate positioning and wonderfully natural pans are just terrific, helping this track do a great job of replicating the immersive soundfield of the original theatrical experience.

To be sure, this one won't wake the neighbors but is probably the best 'Elizabeth' will ever sound, and it's nice to see Universal continue to support high-end audio even on non-action films like this. 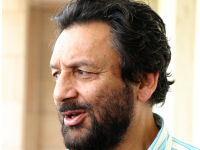 This HD DVD edition of 'Elizabeth' is being released alongside a new "Spotlight Series" standard def DVD, with both versions featuring identical supplements. Note that virtually all of the included extras have been carried over from previous DVD editions, with the only new feature being a lengthy trailer for the film's upcoming sequel -- 'Elizabeth: The Golden Age' -- which comes to theaters this October.

The most significant supplement is an engaging feature commentary with director Shekhar Kapur. Packed with information, Kapur does an excellent job of keeping his thoughts focused and streamlined, ranging from historical factoids to on-set anecdotes, from casting notes to scene dissections. He also candidly discusses the various changes he and the scriptwriters made to keep the film from being four hours long. All in all, this is an intriguing commentary that's well worth your time.

More frivolous are two featurettes -- an original clip that's little more than an extended trailer (6 minutes) and a meatier "Making Of" featurette (24 minutes) that has a nice pace but features an abundance of talking-head interviews rather than a concentrated offering of on-set footage. The best bits are centered around brief snippets with the actors -- each one discusses their characters and the unique ways in which Kapur lured them into the project.

(Note that all of the aforementioned video-based supplements are presented in standard-def 480i/p video only.) 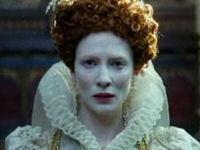 A cinematic tour de force, 'Elizabeth' is an exquisitely dense and convincing exploration of the early rule of one of history's most influential women. This HD DVD release is no slouch either, featuring an above-average video transfer and a solid TrueHD audio mix that does a great job of recreating the theatrical experience. A slim set of supplements drags down the overall grade, but never mind that -- there's more than enough good here to compensate.

Sale Price 15.7
Buy Now
3rd Party 4.27
In Stock.
See what people are saying about this story or others
See Comments in Forum
Previous Next
Pre-Orders
Tomorrow's latest releases