Overview - In 2002, two rival Olympic ice skaters were stripped of their gold medals and permanently banned from men's single competition. Presently, however, they've found a loophole that will allow them to qualify as a pairs team.
OVERALL
Recommended

Professional figure skating is a subject so ripe for cinematic satire that it's truly a wonder that 'Blades of Glory' is first big budget comedy to exploit it. The costumes, the music, the pageantry, the preening -- as much as we may watch in awe as the enormously talented athletes create magic on the ice, it's hard not to also stifle a giggle at the grandiose excess of it all.

Much the same way he did with NASCAR racing in 'Talladega Nights,' Will Ferrell lampoons the sport to great effect with 'Blades of Glory.' This fantastically silly, utterly preposterous comedy was the sleeper hit of early 2007, grossing over $100 million and for once delivering all the laughs its trailers promised.

Ferrell stars as Chazz Michael Michaels, an uber-hetero world-class figure skating champion (and adult film star, but nevermind that). After a on-rink run-in with his rival, the angel-cheeked skating prodigy Jimmy MacElroy (Jon Heder, not straying too far from his classic 'Napoleon Dynamite' persona), both are stripped of their gold medals and permanently banned from men's single competition. However, after few desperate years stuck on the has-been, quasi-celebrity skating circuit, the two find a loophole that will allow them to qualify as the world's first all-male pairs team.

Here is where 'Blades of Glory' could have simply been another of those one-joke movies -- nothing more than a series of cringe-inducing homophobic barbs about how funny men in tights are. But if 'Blades of Glory' isn't exactly high-brow, Ferrell and Heder find just the right tone in satirizing not "gayness," but instead the male discomfort with the sexual stereotypes of "effeminate" sports like figure skating. Ferrell in particular creates such a hyper-masculine alpha male in Chazz -- one who's overcompensating to a ridiculous degree, that it becomes truly inspired social commentary. 'Blades of Glory' is actually quite astute, even sublime, in skewering male anxieties.

The film also doesn't limit itself to obvious satire by having a field day with the highly-competitive nature of Olympic sports. Fulfilling the villain requirement are Stranz and Fairchild Van Waldenberg, a brother-and-sister team of rival German skaters who will do anything to defeat Chazz and Jimmy. As played by Will Arnett and Amy Poehler, they're like Boris and Natasha on ice, twirling their mustaches as they hatch a series of increasingly bizarre schemes. It all leads to an extended chase sequence, as Stranz chases Chazz over ice, through a crowded shopping mall and finally onto the rink in a madcap bit of lunacy that is one of the movie's highlight sequences.

If 'Blades of Glory' were only spandex and slapstick, however, it probably would have been nothing more than a second-rate "SNL" sketch that quickly wore out its welcome. But typical of Ferrell's more recent penchant for humanistic comedy over sheer satire (particularly in the underrated 'Stranger Than Fiction'), he sets the tone for the rest of the film by plumbing some genuine (if completely ridiculous) pathos out of these larger-than-life characters. When Chazz is forced to endure a sting inside a giant furry animal costume in the kiddie spectacular "Grumlets on Ice" (a pitch-perfect parody of those awful Ice Capades shows), he somehow manages to make it simultaneously sad, touching and hilarious. Indeed, we will come to like all of the characters in 'Blades of Glory,' because however over-the-top they may be, there is a kernel of recognition to even their most outlandish behavior that rings true.

Of course, 'Blades of Glory' is ultimately impervious to critical analysis, because it aims to be nothing more than just a very funny movie. It takes a sport that just cries out to be made fun of, hits the laugh bull's-eye more than it misses, and has a few truly inspired, memorable setpieces that are sure to get a lot of repeat spins in your HD DVD player. This is the kind of check-your-brain-at-the-door, memorize-your-favorite-lines-and-recite-them-over-and-over-again guilty pleasure that you can throw on any time you need to forget your troubles and just laugh your ass off. 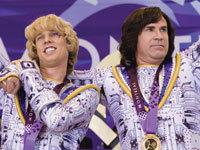 Although it was originally announced for release on both Blu-ray and HD DVD, thanks to last week's announcement by Paramount, 'Blades of Glory' instead marks a major milestone in the high-def format war as the very first of the studio's HD DVD-only high-def releases. That means that the scrutiny on this title (and likely at least the next few from Paramount) will be quite intense. In the case of 'Blades of Glory,' HD DVD fans need not worry. While the film's more generic visual style may not lend itself to a true reference-quality release, this 1080p/AVC MPEG-4 is encode certainly a good-looking, attractive presentation.

As you would expect for a new release, the print is pristine with nary a speckle or blemish to be found. Although grain is slightly more noticeable in the film's darker scenes, blacks are spot on, and contrast does not appear overcooked or blown out. Colors are also generally well-saturated, although perhaps not as vibrant as one might expect given all the flamboyant costumes and larger-than-life production design. Hues, meanwhile, are stable, and noise and bleeding are not a problem.

Detail is generally strong, although a few of the wider shots look a bit softer and lacking in true depth than the best new releases I've seen on HD DVD. Lastly, while there's none of the irritating edge enhancement that has plagued some Paramount next-gen titles in the past, some of the softer shots do look a bit tweaked, with very slight edge halos visible. All in all, in terms of picture quality, 'Blades of Glory' earns a solid silver medal.

Silly comedies like this usually don't offer much in the way of sonic thrills, but this disc's Dolby Digital-Plus 5.1 Surround track (1.5mbps) ended up being a nice surprise, as the the film's sound design is actually quite lively, with lots of highs and lows that really light up the soundstage. (Note: The disc was originally announced as having a Dolby TrueHD track, but it's not actually included on the disc.)

The surrounds come alive with directed discrete effects and strong atmosphere. The competition scenes in particular are a highlight, with crowd noise and other ambiance very strong in the rears. Likewise, the extended chase scene between Will Ferrell and Will Arnett features excellent localization of sounds and near-transparent imaging. The use of music is also nicely done, with the classic rock/pop songs scattered about the soundtrack adding a nice heft to the overall mix.

Dynamics are also sharp. Low bass is nice and punchy but not overpowering, with the subwoofer delivering some real oomph considering the comedic nature of the film. The rest of the range is expansive but not booming. Dialogue, as well, is expertly recorded, with not a single word lost, and I found no volume level adjustments necessary. A very nice soundtrack indeed. 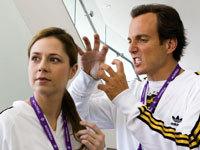 'Blades of Glory' comes to HD DVD day-and-date with the standard-def DVD release, and although both editions receive identical extras, the HD DVD has a clear leg up, as the majority of the video-based supplements are presented here in full 1080 video (except as where noted below).

The material itself is fun, but rather fluffy. The centerpiece is the 15-minute "Return to Glory," which is a typical EPK. The directorial team of Josh Gordon and Will Speck, co-screenwriter siblings Jeff and Craig Cox, and most of the main cast including Will Ferrell, Jon Heder, Will Arnett and Amy Poehler contribute on-set interviews, which are hardly serious. I don't think Ferrell contributes one on-the-level comment through the entire featurette, which is generally amusing, but grows to be a bit tiresome even after only 15 minutes.

The remaining four featurettes are just as irreverent, but at least they occasionally hit upon more insightful aspects of the film's production. "Cooler Than Ice: The Super-Sexy Costumes of Skating" (5 min.) adds costume designer Julie Weiss to the interviewee list, and she had a tough job -- as Ferrell jokes, "It's the first time I've ever been interviewed in a unitard!" Likewise, "Celebrities on Thin Ice" (6 min.) chats up choreographer Sarah Kawahara, who faced an equally challenging situation -- make these decidedly non-athletes come off as at least passable fake-skaters. Unfortunately, some of this material is simply rehashed directly from the EPK, making this one feel fairly redundant.

"Arnett & Poehler: A Family Affair" (5 min.) is quite funny, even if again Arnett and Poehler's attempt to be "serious" only last about 12 seconds. "20 Questions with Scott Hamilton" is a 5-minute sit-down with the highly-decorated skating legend, who comes off as an extremely likable good sport. Finally, "Hector: Portrait of a Psychofan" is more riffing with actor Nick Swardson, who plays Jimmy's stalker. Cute, but more of an outtake than a real "featurette."

Speaking of outtakes, there is also a short but funny 2-minute Gag Reel, plus a much better 8-minute montage of Alternate Takes. Ferrell is particularly inspired here, ad-libbing incessantly and coming up with some great off-the-cuff pop culture references -- this one is definitely worth watching. More (unintentional) yuks come with the music video for the Bo Bice song "Blades of Glory," which I originally thought was also a parody, although by the end of the clip, I got the scary impression that Bice didn't mean it is a put-on...

Next we have a clutch of four Deleted Scenes, totaling nearly 10 minutes. Nearly all of these were very funny, and almost as good as anything in the film. I suspect they were only cut because they're narratively superfluous.

Finally, we have some promo items. There is a Photo Gallery of publicity and on-set stills, plus a "Moviefone Unscripted" promotional interview (10 min.) with Ferrell, Arnett and Heder -- the latter of whom is clearly out-gunned by his far more experienced comedic partners. There are also four "MTV Interstitials," aka promo spots, to round out the set. (Note that these last two video features are the only ones on the disc not in HD, but 480p/MPEG-2 video only.)

'Blades of Glory' is not only very funny, but it's smarter and better acted than you might expect. This HD DVD release is also a winner -- the video and audio are strong, and the extras fairly extensive. No, this isn't an absolute reference-quality title, but Paramount's first HD DVD-only release is certainly solid, and is sure to please fans of the film.

Sale Price 1.99
Buy Now
3rd Party 1.87
In Stock.
See what people are saying about this story or others
See Comments in Forum
Previous Next
Pre-Orders
Tomorrow's latest releases