OVERALL
Worth A Look

When an indie flick named 'The Cooler' (William H. Macy and Alec Baldwin) hit theaters in 2003, critics instantly called it something special. A quiet and reflective character study from writer/director Wayne Kramer, it won heaps of attention across the board. As such, expectations for Kramer's next film were high and I was curious to see where his talent for writing naturalistic dialogue would take him. Strangely, his next effort seems to be the polar opposite in style, tone, and quality. 'Running Scared,' released in 2006 (not to be confused with the 1986 film of the same name starring Gregory Hines and Billy Crystal), is a frenetic and ultraviolent film where the f-bomb appears to be sufficient to properly convey a character's motivations and thoughts.

Paul Walker plays Joey Gazelle, a bottom-rung mobster who's told to dispose of a handgun that was used to kill corrupt police officers during a botched drug deal. Hiding it in his basement, Joey's world is turned upside down when his son's ten-year-old friend, Oleg (Cameron Bright), steals the gun and uses it to shoot his abusive stepfather. The gun subsequently ends up being passed between every level of lowlife the city has to offer. At the same time, Joey musr protect his son, keep his marriage together, keep Oleg alive, find the gun, outwit a surviving dirty cop (Chazz Palminteri), avoid the Russian mobsters connected to Oleg's dead stepfather, and deal with his own inner demons -- all in the course of one night.

As hyperactive as 'Running Scared' tends to be, it requires a great deal of patience to watch. Every situation is pushed so far over the top and so far to the extreme that I often found myself searching for any point or redeeming value to the film. Characters are little more than caricatures of tough-talking, bullet slinging thugs, and their interactions are laughable at best. Most of the actors seem to scream their lines, scowl as much as possible, and leap from one insane reaction to the next. Worst of all, between the script and Walker's performance, Joey is crafted into a terribly unsympathetic character -- when a left-turn ending comes out of nowhere, I was too distracted by how abusive he was with Oleg and his own son to care.

The driving force behind 'Running Scared' seems to be violence for the sake of violence. A weary score, a bizarre subplot involving child molestation, and a somber tone would seem to suggest that Kramer has layered the film with a pseudo-commentary on the manner in which violence affects people. The only problem is that he seems to imply a criminal loses his humanity simply by sheer exposure to the violence inherent in his environment. In other uber-violent action flicks like 'Crank,' at least it's possible to justify relentless action and bloodshed since they're used to up their film's entertainment value. In this case, however, it seems Kramer is constantly trying to push a message with 'Running Scared,' yet he consistently comes up short with a shallow and unfocused purpose that only he and his cast seem to understand.

As it stands, I'm sure a lot of people enjoy 'Running Scared' as another quick fix of mobster fare. But while there are some fairly interesting action beats here, 'Running Scared' has a debilitating distaste for its own characters and never breaks free from its overwhelmingly cynical portrayal of humanity. That makes it a bit of a buzz kill, even if on the surface it would seem to share a passing resemblence to crowd-pleasers like 'Crank,' 'The Transporter,' and 'The Fast and the Furious' series. 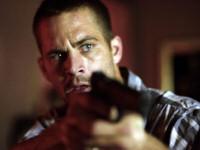 Presented in 1080p using the VC-1 codec, this HD DVD German import of 'Running Scared' boasts an above average transfer. Colors are bold, black levels give the picture a nice depth, and impressive texture detailing create a convincing three dimensional image. Most of the scenes take place at night, but the visuals don't grow murky in the shadows. Instead, deep yellows, browns, and blues seep across the screen and keep things vibrant and luminous. The source is in great shape and only a smattering of white flecks drew my attention. I didn't catch any instances of artifacting, macroblocking, or black crushing and overall I was pleased with the quality of the transfer from beginning to end.

Unfortunately, there are a few minor problems. Slight color banding randomly makes an appearance, contrast is sometimes overblown, and a few shots are unintentionally softer than others. But the biggest issue I had is one that's sure to generate controversy -- 'Running Scared' is plagued by thick grain clouds that are so prevalent they became distracting. I normally have a lot of patience with intentional grain, but the downside here is the film's high-def presentation. Grain levels are so ridiculous at times that a paused shot can look as if it has salt and pepper sprinkled across the image. The resulting sea of speckles comes in waves and I could never get used to the grain because it was constantly increasing and decreasing throughout the film. In short, the grain in this transfer is too noticeable, yet not consistent enough to allow me to immerse myself in the otherwise top notch visuals.

All things considered, fans of the film won't be disappointed by the film's treatment on this import disc, and those looking for a nice upgrade to the standard DVD won't feel as if they've wasted their money. While the visuals on the DVD are already very good, they can't compare to the sharpness of this transfer. 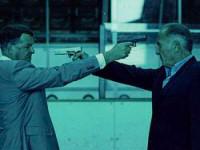 Since this HD DVD was released in Germany, the menus may seem like something of a challenge, if (like me) you don't read German. Still, switching to the English language mix is relatively easy, requiring only a couple of clicks. The movie starts playing automatically, but you only need to press the "Menu" button on your remote, choose "Setup," and then click on "Englisch DTS-HD." Then, to turn off the German subtitles that then automatically pop up, you need to revisit "Setup" and uncheck the selection that reads "Deutch Untertitel."

For those of who do speak German, the default track on 'Running Scared' is a dubbed German DTS-HD 5.1 surround mix. For our purposes however, I'll focus on the English DTS-HD 5.1 audio track, which does a great job of crafting a convincing world of crime and street life. Ambiance is strong and the rear channels get involved on a regular basis. The dynamic range of the mix is the track's strong point -- bass tones are low and shake the room, while treble tones are unwavering and solid. The music tends to overpower at times, but it is generally well prioritized with a good spread on the instrumentation.

Dialogue is crisp but bass heavy -- it seems intentional, but occasionally causes voices to overlap in chaos. Channel movement is fierce because of the on screen action, but sounds pan well and have good accuracy. My only real issue with this DTS-HD mix is that gunshots, explosions, and line delivery are all at equally bombastic levels. This is likely intentional to "ramp up the impact" of certain effects, but it tends to leave the over-the-top audio track feeling overfilled. Like the grain in the visuals, this one major distracting element in an otherwise strong audio package made it difficult to totally immerse myself in the world of the film.

In short, the sound package on this import is impressive enough to easily please fans. While it's not a huge leap above the standard DVD, it is fuller and boomier than the film's stateside DVD treatment. The idea of disc navigation may seem daunting on a foreign language disc, but I thought it was a cinch to figure out where everything was located.

This import HD DVD is a bit light on supplemental materials compared to its US standard DVD counterpart, but at least it's not barebones. The features menu is almost entirely in English and doesn't take any effort to navigate.

First up is an English language commentary track with Wayne Kramer that allows the filmmaker to discuss everything from his script to the final product of the film. I didn't love this track. Kramer seems to be a bit too enthralled with his own work, discusses too many technical details, and occasionally falls into the trap of narrating what is happening on screen. While he occasionally attempts to explain the meaning to the film, he tends to babble and lose himself in tangents. In the scene where Paul Walker first tries to track down the missing gun, Kramer goes on at length about the "Alice in Wonderland" imagery and concepts he used to increase the surrealism of the story. However, matching what he says to what appears on screen requires a real stretch of the imagination and I personally had an impossible time buying into what Kramer was saying.

The only other standard supplement included here is a storyboard montage set to the film's score. There isn't a lot to this one, and the black and white artwork is only marginally interesting to stare at. However, it is presented in widescreen HD, so at least that counts for something. 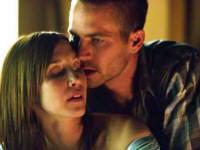 While I personally didn't enjoy 'Running Scared,' fans of the film will be excited to know that this HD DVD German import has a lot to offer. A great transfer and an above average sound package make this a technical no-brainer that fans worldwide should be very happy with. It'll cost you some extra cash to order this import -- Amazon .de is selling it for £22.95 (approximately $30.70 US) -- but if you absolutely can't wait for 'Running Scared' to come our way, this HD DVD disc won't disappoint.

Thanks to Karl for loaning us this disc!

List Price $30.70
Go To Store
See what people are saying about this story or others
See Comments in Forum
Previous Next
Pre-Orders
Tomorrow's latest releases