Overview - Nicholas Angel is the finest cop London has to offer, with an arrest record 400% higher than any other officer on the force. He's so good, he makes everyone else look bad. As a result, Angel's superiors send him to a place where his talents won't be quite so embarrassing -- the sleepy and seemingly crime-free village of Sandford. Once there, he is partnered with the well-meaning but overeager police officer Danny Butterman. The son of amiable Police Chief Frank Butterman, Danny is a huge action movie fan and believes his new big-city partner might just be a real-life "bad boy," and his chance to experience the life of gunfights and car chases he so longs for. Angel is quick to dismiss this as childish fantasy and Danny's puppy-like enthusiasm only adds to Angel's growing frustration. However, as a series of grisly accidents rocks the village, Angel is convinced that Sandford is not what it seems and as the intrigue deepens, Danny's dreams of explosive, high-octane, car-chasing, gunfighting, all-out action seem more and more like a reality. It's time for these small-town cops to break out some big-city justice.
OVERALL
A Must Have

Do yourself a favor -- visit YouTube and type in the word "Spaced." The results will lead you to a hilarious British TV sitcom helmed by actor Simon Pegg and director Edgar Wright. A mere fourteen episodes of the show were broadcast in the UK between 1999 and 2001, but this limited debut allowed the two friends to bring their love letter to horror legend George Romero ('Shaun of the Dead') to theaters across the globe. In turn, the critical success of 'Shaun of the Dead' paved the way for 'Hot Fuzz' -- Pegg and Wright's love letter to modern action films.

'Hot Fuzz' is the story of Nicholas Angel (Simon Pegg), a by-the-book London policeman whose impressive achievements are making every other officer look bad. To keep everyone happy, the Chief Inspector (Bill Nighy in top form) transfers Angel to a quiet town called Sandford. Crime is non-existent in the tight-knit rural village and Angel is depressed by the friendly surroundings, his unit's lack of experience, and his bumbling partner, Danny (Nick Frost).

But he soon begins to notice there's something strange about Sandford -- a local businessman (Timothy Dalton) raises his suspicions, the town's inspector (Jim Broadbent) seems to eager to let miscreants go free, and key leaders in the community seem to conveniently look the other way anytime something bad happens. Before the big-city cop can place his finger on what's wrong, dead bodies begin popping up everywhere. The townspeople believe each death is an accident, but Angel knows murder when he sees it. With local help and the action-movie know-how of Danny at his disposal, Angel works to uncover the secret buried beneath the smiles of Sandford.

A key component shared by many British comedies seems to be their unique ability to derive laughs from watching dry-toned people encountering bizarre circumstances. As situations become more and more ridiculous, it's endlessly fun to watch characters try to maintain their composure regardless of what's happening to them. 'Hot Fuzz' uses this standard of British comedy to great effect and the film works on many different levels -- as a buddy-cop comedy, as a parody of the genre, and even as social commentary.

Perhaps best of all, even as it fills its action beats with parody, 'Hot Fuzz' manages to maintin a genuine respect for the balls-out intensity of '80s and '90s genre films. As such, the action scenes boast top notch stunts and camera work, drawing as many cheers as it does laughs.

The only possible negatives I could find in 'Hot Fuzz' came from comparing it to the duo's earlier parody, 'Shaun of the Dead.' While the first film clips along with intense focus, 'Hot Fuzz' occasionally meanders. The second act, in particular, has a tough time getting to the point and sometimes chases unnecessary subplots. Likewise, I thought 'Shaun of the Dead' explored the zombie subgenre a bit more completely, referencing a seemingly endless supply of classic genre films, while 'Hot Fuzz' tends to repeatedly return to the same handful of films for its laughs.

Still, 'Hot Fuzz' is a hilarious sophomore effort from Simon Pegg and Edgar Wright. If you've never experienced their clever blend of British humor and genre satire, you're in for a treat -- and if you're already a fan, you'll find plenty more to enjoy here. Either way, this one's sure to please fans of both comedy and action. A solid recommend. 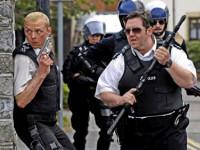 This 1080p/VC-1 transfer made me sit up from the moment Nicholas Angel flashes across the screen. This is easily one of the finest high-def presentations I've seen on high-def disc and I can't get over how impressed I was by its precision. While the London palette is somewhat washed out, it still features bold primaries, excellent contrast, and flashes of life. The Sandford scenes, by contrast, pop off the screen with vibrant colors and inky blacks that bring a convincing level of depth to the picture. Exteriors in particular are reference level with strong greens and blues that never affect the fidelity of the image.

Detail is astounding and there isn't a hint of grain -- every background and foreground edge is sharp and clear. Just watch the shootout near the end of the film in the grocery store: every label is legible, each speck of blood is crisply defined, and all of the spilled food is expertly rendered. To top it all off, the image never feels artificial -- skintones are natural and there's not a hint of any overzealous post-production clean-up work. Noise is non-existent, the only softness in the film appears to be entirely intentional, and edge enhancement isn't visible once. To be blunt, I couldn't come up with anything negative to say about the transfer.

A quick comparison to the standard edition version of the film on the flipside of this combo disc shows just how improved 'Hot Fuzz' is in its upgrade to high-def. The DVD transfer is dull, soft, and blocky -- it doesn't even come close to the HD DVD side. 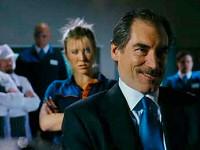 The audio package is nearly as impressive as the video. Although it doesn't boast a high-end option like a Dolby TrueHD track, the included Dolby Digital-Plus 5.1 EX surround mix (1.5 Mbps) is impressively proficient in everything it does. Rich dynamics immediately make their presence known with boomy bass and crisp treble ranges that didn't have peaking issues or stability problems. Dialogue is layered exactly as it should be within the soundscape and I wasn't distracted by any prioritization mishaps.

Channel movement occurs frequently and startlingly fast -- but the Digital-Plus mix offers subtle pans and smooth transitions that add a level of authenticity to the soundfield. More importantly, accuracy is exact and all of the speakers get a full workout with boisterous explosions and weighty gunshots. I continually found myself turning my head at sounds that seemed to be occurring elsewhere in my house. Immersing myself in the mix was a cinch and I found the entire sound experience to be extremely pleasant from beginning to end. 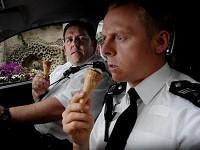 Wow. This HD DVD boasts a mind-boggling eighteen hours of special features -- that's more supplemental content than I've ever had the pleasure of reviewing on any disc release, and it's the second-most packed HD DVD to yet see release (behind Warner's 'Ultimate Matrix,' which was priced at three times the cost). This edition of 'Hot Fuzz' includes all of the supplemental features found on the standard DVD, plus an overwhelming amount of HD DVD-exclusive extras (see below).

First up among the standard supplements is an audio commentary with actor Simon Pegg and director Edgar Wright. Unlike most tracks of this sort, back-patting is kept to a minimum, as the two have a breezy chemistry that brings a welcome dose of reflection to their efforts in 'Hot Fuzz.' Both share a number of memorable (and funny) anecdotes as they discuss writing the script, filming key scenes, and working with all the talented character actors who bring Sandford to life.

Next dig in and prepare yourself for a nice series of "Deleted Scenes" (21 minutes) that can be played individually or all at once (with or without commentary from Pegg and Wright). A few seem repetitive and others only add in a few extra bits to existing scenes, but the majority of these are amusing enough to justify at least one viewing. Even better is a lengthy collection of "Outtakes" (11 minutes). Although this is a typical collection of bloopers that generally revolve around mistakes on set, the cast is clearly having so much fun that their laughter is contagious.

A collection of "Storyboards" literally encompasses every scene in the entire film. I'm not a nut for this sort of feature, but storyboard fans will be impressed by the enormous assortment of images.

Continuing this OCD-esque presentation of behind-the-scenes info is the "Fuzz-O-Meter" -- a pop-up trivia track that plays overtop of the film and provides way too much information to soak up in a single viewing. This is another feature that doesn't necessarily pique my interest, but the sheer weight and detail of the track is impressive.

Next comes a trio of short in-joke videos. "The Man Who Would Be Fuzz" (1 minute) is an all too brief outtake where Simon Pegg and Nick Frost impersonate Michael Cane and Sean Connery. I actually ended up watching this one three times because I just couldn't get enough. It's one of the shortest features, but definitely one you shouldn't miss. Likewise, "Danny's Notebook: The Other Side" (1 minute) is a quick look at the animation Frost's character makes using his pad. Lastly, "Hot Funk: The TV Version" (4 minutes) is a collection of a few key scenes in edited-for-TV form.

The only standard supplement that'ssolely restricted to the DVD side of this Combo Disc is a featurette called "The Fuzzball Rally: US Tour Piece" (28 minutes), which documents Pegg, Frost, and Wright's press tour for the film's release in the US. The segments are mildly amusing as the boys get a punch drunk near the end, but it's skippable for the most part.

Finally, we have a collection of promotional materials, including the film's theatrical trailer, UK television spots, and a alternate cut of the main trailer.

(Note that all of the video-based supplements listed above are presented in 480i/p only.) 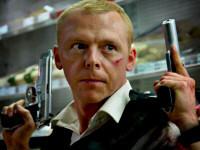 Our site has never reviewed a release that's scored 5 stars overall -- in fact, this entire disc seems too good to be true. Not only is the movie entertaining and satisfying, but the video transfer is gorgeous, the audio packs significant punch, and there are approximately eighteen hours of entertaining supplemental materials.

Judged in comparison to the standard-def DVD, the video and audio packages are both significantly improved, and this HD DVD even includes ten hours of features that aren't even available on the US-released DVD.

Simply put, in my opinion, this is currently the best overall high-def release on the market -- especially when you factor in the price. Purchasing 'Hot Fuzz' on HD DVD is a no-brainer for fans and an easy recommendation for newcomers. This is what high definition is all about.

Sale Price 5.49
Buy Now
3rd Party 5.49
In Stock.
See what people are saying about this story or others
See Comments in Forum
Previous Next
Pre-Orders
Tomorrow's latest releases