Overview - Blue Planet reveals the Earth to us as only few people have ever seen it: from space. Orbiting 200 miles above Earth's surface, we can see familiar landforms: the majestic Himalayas, giant Namib desert sand dunes, jewel-like Caribbean Islands. From this unique vantage point we see how natural forces - volcanoes, earthquakes and hurricanes - affect our planet, and how a powerful new force - humankind - has begun to alter the face of the Earth. From Amazon rain forests to Serengeti grasslands, Blue Planet inspires a new appreciation of life on Earth, our only home.
OVERALL
Recommended 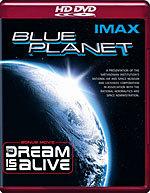 The popularity of IMAX has exploded over the last decade. It's now routine for big-budget Hollywood blockbusters like 'Harry Potter,' 'Batman Begins' and 'Transformers' to open on hundreds of the mammoth-sized screens all over the country, and the studios are even investing in the added expense of technologies such as 3-D to lure in audiences. Combined, each of these efforts have worked like gangbusters: what once seemed to be an exhibition format whose main provinces were museums and amusement parts, IMAX has now truly become as legitimate (and profitable) an avenue of distribution as first-run movie houses, home video and cable.

With all this in mind, revisiting a classic-era IMAX film like 'Blue Planet' is a thoroughly nostalgic -- even quaint -- experience. Back in 1990, at the time of the film's original IMAX release, about the only things you were likely to see on the format's 50-foot-high, jumbo-sized screen were documentaries on wildlife, sporting events and, of course, space flight. 'Blue Planet' doesn't depart from this vintage formula, and is prototypical IMAX -- an extended, 40-minute travelogue that's really only notable for its awe-inspiring imagery.

As a documentary, let me be honest and say 'Blue Planet' is pretty darn dull. The narration is plodding, there is no real dramatic arc to speak of, the score is generic, and don't expect anything in the way of engaging characters. Yet ultimately none of this matters, for the images in 'Blue Planet' are so gorgeous and stunning, it is almost impossible not to be captivated, despite the banality of the rest of the film.

Aside from some archival and on-the-ground footage that looks like any old CNN broadcast, the vast majority of 'Blue Planet's 40-minute runtime is comprised of material taken directly from various NASA space shuttle flights. Focus on the technological mumbo jumbo of space flight, and the crew and the challenges they face, is thankfully minimal. Instead, 'Blue Planet' concerns itself almost entirely with images of our planet from a view that the vast majority of us mere mortals will never be able to experience with our own eyes. The feeling one is left with while watching this footage is -- not to be melodramatic -- truly transcendent. 'Blue Planet' may not be "about anything," but by simply showing us our world from the vantage point of the heavens, it becomes about everything.

Though technically included as a supplement, Warner has also provided another full-length IMAX film on this HD DVD release, called 'The Dream is Alive,' which is worth mentioning here as well. Produced in 1985, five years earlier than 'Blue Planet,' it makes for a nice companion piece. In fact, it probably should be viewed first. Walter Cronkite narrates, but 'The Dream is Alive' is far quieter than 'Blue Planet' in terms of words -- instead, it is almost entirely told through images. Providing more extensive background on the actual process of launching a space shuttle, it's an effective (if sometimes didactic) primer that sets up the near-orgasmic sights in 'Blue Planet' perfectly.

If Warner had released 'Blue Planet' and/or 'The Dream is Alive' alone, I might not have been inclined to give this disc as high a Movie rating as I am. But together -- and even though 'The Dream is Alive' is tacked on like an afterthought (Warner really should have just billed this as an IMAX double feature) -- the two films make for a beautiful, thought-provoking and often unforgettable ride. If you're looking for nothing more than breathtaking imagery to feed your high-def home theater, you need look no further than this classic IMAX release.

Warner is releasing 'IMAX: Blue Planet' concurrently on both HD DVD and Blu-ray, with each receiving identical 1080p/VC-1 encodes. Note that 'Blue Planet' (and 'The Dream is Alive') were photographed and exhibited in IMAX's standard 1.44:1 aspect ratio. For the high-def releases, Warner has opted to present both features in a recomposed 1.78:1 aspect ratio.

'Blue Planet' generally looks magnificent. Setting aside some of the grainy, B&W archival footage of the 1969 moon landing and the occasional insert shot from poor sources, the vast majority of the runtime makes for terrific high-def. I wasn't expecting so clean a source -- although there are a fe specks of dirt visible here or there, grain is not at all distracting. In fact, aside from some slight print wavering (whites in particular can tremble at times) the transfer is rock solid. Colors are excellent in their purity and cleanliness, sharpness is also superior, and even shadow delineation reveals the kind of fine detail up there with the best transfers -- of any source -- that I've seen on either high-def disc format. Only a bit of visible edge halos intruded on the experience. All in all, this is a terrific presentation.

'The Dream is Alive' is also a very fine presentation, and comparable to 'Blue Planet' in most respects. However, there are a few more dirt and speckles on the print, and a wider variety of sources are used, so some of the footage can be noticeably grainy and lacking in fine detail. Colors, however, are just as vibrant as 'Blue Planet,' and just about everything shot in space looks fantastic.

Warner has been increasingly more supportive of high-resolution audio formats on many of its recent HD DVD and Blu-ray releases, and 'IMAX: Blue Planet' continues this trend. Both the main program and 'The Dream is Alive' come with new Dolby TrueHD (48kHz/16-bit) and Dolby Digital (640kbps) 5.1 surround tracks, though 'Blue Planet' appears to benefit most.

Neither 'Blue Planet' nor 'The Dream is Alive' were produced at a time when gangbusters, over-the-top surround mixes were common (even with IMAX exhibition), so don't come into this one expecting the rears to light up like a Christmas tree. The majority of both features are sonically void, with only dull narration and unmemorable score present. To be fair, these elements are presented with nice clarity (you'll certainly hear every word of the narration), but it's hard to get excited with what is essentially a stereo track.

However, 'Blue Planet' does have a few very cool moments featuring actual sound recorded during the shuttle missions, as well as launch and landing. Here is where the Dolby TrueHD track delivers a noticeable boost, with deep bass sounding quite strong. It's not up to the level of the absolute best I've heard, but you'll certainly feel the vibrations from your subwoofer. Dynamic range is also expansive, with considerable heft to the mid-range and sweet, clean highs. Again, the narration and score are pretty dull, but when 'Blue Planet' (and to a lesser extent, 'The Dream is Alive') kick in with the good stuff, the audio definitely delivers.

Aside from the bonus inclusion of 'The Dream is Alive,' there are no additional supplements. (See the "movie itself" section above for my complete thoughts on this very nice bonus IMAX film -- as I mentioned earlier, this one is good enough that I really think Warner missed an opportunity in not marketing this disc as an IMAX double feature.)

'Blue Planet' is classic IMAX film that's stood the test of time. Granted, like most of its IMAX brethren, the narration and score add little to the experience, but when you're dealing with images as jaw-dropping as these, who really cares?

Warner has put together a very nice offering for this HD DVD. The video is excellent, and the audio -- though limited by the source material -- delivers some fine moments. And although it may be the only extra in the package, the inclusion of a whole other IMAX feature 'The Dream is Alive' is quite the bonus. High-def fans, your IMAX eye candy has arrived.

Sale Price 3.85
Buy Now
3rd Party 3.85
In Stock.
See what people are saying about this story or others
See Comments in Forum
Previous Next
Pre-Orders
Tomorrow's latest releases