Overview - Single-girl anxiety causes Kat Ellis (Messing) to hire a male escort (Mulroney) to pose as her boyfriend at her sister's wedding. Her plan, an attempt to dupe her ex-fiancé, who dumped her a couple years prior, proves to be her undoing.
OVERALL
One to Avoid

Proving once again that in the mind of Hollywood, there is nothing that gets a woman more excited than sex with a dollar value attached, 'The Wedding Date' is the latest big-studio produced light romantic comedy to use prostitution in its premise. Sort of a 'Pretty Woman' in reverse, this time it's the guy who is doing the hustling.

Debra Messing stars as Kat Ellis, another in a long line of beautiful and successful female movie characters who are unlucky in love. Despite just being dumped by her fiancee (Jeremy Sheffield), Kat must attend the wedding of her younger sister Amy (Amy Adams) to Edward (Jack Davenport). Rather than face the ridicule of her family and to get back at her ex-fiancee, she does what any sensible, modern woman would do -- she thumbs through the Yellow Pages to find a last-minute, "top drawer" male escort, Nick (Dermont Mulroney) to accompany her.

Of course it's right at this moment that 'The Wedding Date' loses any credibility it might have had. This is another one of those archaic movies that assumes that any single woman is a.) miserable without a man, and b.) deserving of scorn by society for being without a man. Rather than challenge such outdated notions, 'The Wedding Date' revels in them. Are we really to belive that the only cure for a failed relationship in modern America is to hire a hot gigolo who looks like Dermont Mulroney?

But despite its icky premise, 'The Wedding Date' avoids being patently offensive thanks to the quirky appeal of its star. Debra Messing is certainly the only real reason to see this film -- as she proved on eight seasons of "Will & Grace," she has an uncanny knack for making highly neurotic behavior seem absolutely charming. It is no small accomplishment to make this petty, insecure and often just plain whiny character seem likable, but Messing pulls off her first starring big-screen role with great aplomb. Even though she's given some of the most mundane lines of the film, she manages to make even the most cringe-inducing situations in 'The Wedding Date' seem whiplash smart.

Alas, the rest of the film doesn't equal her. While Mulroney has a rascally presence that works well in quirky indie films or when he plays a villain, as a romantic lead he comes up blank. He was the weakest part of the love triangle in his only real hit, 'My Best Friend's Wedding,' and here he just seems uninterested, leaving Messing to carry their romantic scenes on her own. For such a relatively dark character, Mulroney is also strangely neutered in this role -- all the rough edges seem polished off. His Nick is a hustler with the heart of a puppy dog.

Still, I didn't entirely dislike 'The Wedding Date.' As with so many modern romantic comedies, the leads are shoehorned into such a cliched, by-the-numbers plot that it's the supporting characters that shine. Oscar nominee Amy Adams in particular brings some real dimension to her role, while both Davenport and Sheffield might actually have been far better choices to give Nick the smoldering danger that Mulroney lacks.

Still, quirky ensemble and a few good scenes aside, Messing remains the only thing that keeps 'The Wedding Date' from completely evaporating into thin air. If you've ever wondered what would have happened if 'Pretty Woman' met "Will & Grace," here's your answer. 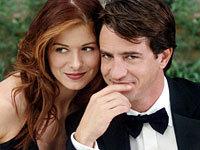 Having grown accustomed to generally impressive high-def transfers for newer titles, the shockingly poor quality of The Wedding Date' really surprised me. The image was so grainy, noisy and jittery that for the first few minutes I thought I had a defective disc or something. This is easily one of the weakest major studio new releases I've yet seen on either HD DVD or Blu-ray.

What happened? Is it because Universal has crammed the feature and extras on a mere HD-15 single-layer disc? I don't know, but I haven't seen horizontal jitter and edge enhancement this noticeable on a high-def release on the 500-plus next-gen titles I've reviewed. There is also plenty of obvious noise throughout, and even some dirt. Blech.

On the bright side, the actual source material seems to be in good shape -- at least there are no major print defects, tears, etc. Blacks, too, are nice and firm, suggesting that it was somewhere along the telecine process where the major hiccups occurred.

And if this release proves anything, it's that even bad high-def can look better than good standard-def. Ignore the awful edge enhancement, and you'll find some decent depth to the image -- heck, a few shots even look quite good. Colors are also robust, especially reds. However, because the transfer is so tweaked, hues look a bit unreal and the whole affair suffers from a bad case of digital-itus. Fleshtones, too, are rather pink.

A few meager perks aside, all in all, 'The Wedding Date' is a date for high-def disaster.

Compared to the bad video, the audio on this HD DVD edition of 'The Wedding Date' seems like a million bucks, although of course that's not saying much. This English Dolby Digital-Plus 5.1 surround track (1.5mbps) is a perfectly fine affair, but the movie's dull sound design doesn't do it any favors.

Tech specs are fine, with solid low bass and nice-sound high-end. Dialogue is a bit shrill at times, though that may just be the acting style (Debra Messing in particular tends to screech a lot of her lines, so you may want to keep the volume down a notch or risk hearing loss). As you might expect from a romantic comedy, surrounds are flat -- there is barely any ambiance here, even during lively crowd scenes. Otherwise, the generic score is well-balanced in the mix, and there are no major audio problems to speak of (dropouts, wonky volume levels, etc.) 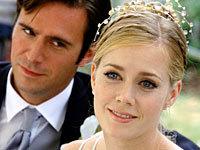 Universal has drafted over all of the same extras on 'The Wedding Date' from the standard-def DVD, although it's not particularly hefty package, and is pretty myopic -- you may as well just call this The Debra Messing Show.

"A Date with Debra" is a personable 7-minute chat with the actress, although since she also contributes a full-length commentary for the film, this clip seems a bit redundant. Don't expect any special or unusual insights here, unless hearing Messing discuss the use of the word "oral" really floats your boat.

Next is a collection of eight Deleted Scenes, which run short at only about 10 minutes. Nothing here is particularly revelatory, with most just extraneous character bits wisely cut out of the film.

Finally, we have that screen-specific audio commentary with Messing. I don't think I've ever heard a track like this that didn't also feature at least someone on the filmmaking team, but apparently the only person important enough to 'The Wedding Date' was its star. To her credit, Messing is clearly intelligent and often quite insightful on this track. Oddly, though, it appears that most of the darker elements that drew her to the script were eventually cut out by the studio in order to make the movie more commercial. Messing also falls into the trap of lapsing into silence and simply watching the movie, which makes this one a bit of a slog at times. But when she brightens up, Ms. Debra is certainly appealing.

Note that all of the above video-based extras are presented in only 480i/MPEG-2 video.

'The Wedding Date' is a somewhat flawed lighthearted romantic comedy, but it gets by on the charm of its star Debra Messing. Unfortunately this HD DVD edition of the film is pretty bad. The video is perhaps the worst I've seen on a recent studio release, with loads of noise, jitter and edge enhancement. The audio and supplements are also no great shakes. If you want to see what bad high-def looks like, give this a rent -- otherwise, this is one to avoid.

Sale Price 0.99
Buy Now
3rd Party 10
In Stock.
See what people are saying about this story or others
See Comments in Forum
Previous Next
Pre-Orders
Tomorrow's latest releases