Overview - A Vietnam War vet(Kevin Costner) must deal with a war of a different sort between his son and their friends, and a rival group of children.
OVERALL
Worth a Look

I have to admit that at first I was surprised to see 'The War' released on HD DVD this early on in the format's existence. Having never seen the film, I assumed that the mid '90s niche drama had long been forgotten, but a quick web search proved my assumptions to be completely wrong. In fact, it seems 'The War' has relatively large and adoring fanbase -- and it's not without reason.

Set in 1970, the film stars Kevin Costner as Stephen Simmons, a veteran of the Vietnam War who returns to Mississippi in emotional shambles. He can't shake what he saw in the war and has a hard time keeping a job and caring for his children. His son, Stu (Elijah Wood), is a ten year old boy thrust into a rickety world who only wants to feel in control of his young life. Over the course of the film, young Stu will confront a variety of adult issues disguised in childhood trappings while coming to grips with his father's situation.

Although Kevin Costner turns in an impressive performance, 'The War' is really a coming of age story at its core, and its young actors generally show up the adults. In particular, Elijah Wood's portrayal of Stu is one of the most believable and emotionally genuine performances I've ever seen from a young actor.

Unfortunately, the film tends to lose ground when it pulls its focus away from Wood and his relationship with his father or his young companions. I couldn't help but be reminded of 'Stand By Me,' a similar film in tone and tale that rightly keeps its camera focused on the kids and their hardships. 'The War,' by comparison, can't seem to decide what it wants to spotlight -- a boy fighting against all odds, a father torn by war, a town split by racism, or a multitude of other things.

As a result, 'The War' ends up being something of a mixed bag. While the scenes centered around Stu have great energy and momentum, most of the rest of the film feels like it's treading water. Aside from Stephen's turmoil, the majority of the adult drama tends to drift toward sappy sentimentality. I know if I'd seen this film when it first hit theaters, I would have been the perfect age to soak it in and probably would have loved every minute. As it stands, I see too many of the thematic seams, making it difficult at times for me to fully enjoy the strokes of brilliance buried underneath.

All in all, 'The War' is certainly worth watching. Fans of the film will surely be more forgiving of its faults and will enjoy revisiting this familiar story about growing up. Newcomers may face a somewhat more uphill battle, but ultimately Wood's groundbreaking performance forgives the film of its sins. In either case, I doubt you'll regret spending two hours of your life with this one. 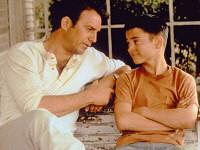 'The War' is presented with a 1080p/VC-1 transfer that demonstrates a real knack for color saturation with the sun drenched palette of the film. Greens and reds are particularly vivid, and skintones have a natural southern warmth to them. Detail ranges from decent to excellent and tends to only falter with fine background elements like tree leaves and underbrush -- whereas skin, pores, freckles, and textures really shine and pop off the screen. There's a real stability to the picture that creates a nice illusion of depth that seems to really capture the feel of a summer spent in 1970s Mississippi.

However, there are several minor inconsistencies that combine to make this one slighly less than perfect. First off, the picture occasionally drifts between two extremes of sharpness -- some shots are too soft and others are haunted by edge enhancement. Secondly, nighttime scenes are sometimes tinted a dark gray instead of black, and seem to prone to bursts of noise (watch the scene with the fireworks at the tree-house to get a taste of both). Likewise, while grain levels remain pleasant during the majority of the daytime shots, they amp up when the sun goes down. Most noticeably, while the contrast is generally nice and three dimensional, there are a handful of occasions where contrast levels are faulty, resulting in murky whites and blacks that fail to make the entire picture as compelling as its better scenes.

When comparing this HD DVD to its standard DVD counterpart (an early disc that was heavily hindered by saturation issues, poor shadow delineation, and bouts of artifacting), this high-def release offers a significant visual upgrade for fans. So, if you've been looking forward to this release, you're likely to be pleased with the results. 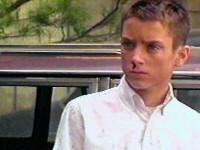 Catalog titles of this vintage usually aren't blessed with the latest and greatest in audio mixes, but Universal has graciously granted this HD DVD edition of 'The War' with two audio mixes -- a more standard Dolby Digital-Plus 5.1 track (1.5 Mbps), plus a Dolby TrueHD 5.1 surround track.

Both tracks feature a credible soundfield that eerily recreates the sounds of summertime -- crickets and insects hum in the fields and every snapping twig and crunching leaf sounds genuine. Channel movement is soft and simple (making it a cinch to just sit back and enjoy the soundscape), and accuracy is impressive for such a small character-driven film.

Comparing the TrueHD to the Digital-Plus 5.1 track, the TrueHD mix showcases crisper dialogue, stronger ambiance, and richer musical tones in the soundtrack, but the film's relatively limited sound design just doesn't provide enough oomph to really demonstrate the full potential of a TrueHD mix. For the majority of the film, conversations, music, and ambient noises are the only things populating the soundscape.

Fans considering this HD DVD as an upgrade to the standard-def DVD won't be disappointed -- the audibly intricate details and the quality of both the TrueHD and Digital-Plus mixes easily trump the standard DVD.

Not a thing. Granted, the standard DVD (released in 1999) was a barebones edition as well, but at least it contained bios, production notes, and the film's theatrical trailer. 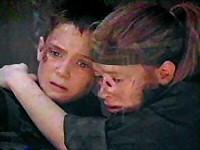 Although 'The War' is far from a perfect film, an excellent performance by Elijah Wood keeps this one afloat. This HD DVD is even more barren of supplements than the earlier standard DVD, but fans of the film should be more than satisfied with the above average transfer and a great duo of audio mixes. At the end of the day, this one's certainly worth a rent and you can decide for yourself from there.

Sale Price 12
Buy Now
3rd Party 8
In Stock.
See what people are saying about this story or others
See Comments in Forum
Previous Next
Pre-Orders
Tomorrow's latest releases