Overview - There is an old ghost story in the sleepy town of Ravens Fair about Mary Shaw, a ventriloquist who went mad. Accused of the murder of a young boy, she was hunted down by vengeful townspeople who cut out her tongue and killed her. They buried her along with her "children," a hand-made collection of vaudeville dolls. Since that time, Ravens Fair has been plagued by death. The ghastly dolls from Mary Shaw's collection have gone missing from the grave and reappeared over the decades. In the dead of night--wherever they are glimpsed--families are found gruesomely murdered... with their tongues torn out. Far from the pall of their hometown, newlyweds Jamie and Lisa Ashen thought they had established a fresh start. But when his wife is grotesquely killed, Jamie reluctantly returns to Ravens Fair for the funeral, intent on unraveling the mystery of her death. Once reunited with his ill father and his father's new young bride, Jamie must dig into the town's bloody past to find out who killed his wife and why. As he uncovers the legend of Mary Shaw, Jamie unlocks the story of her curse and the truth behind the song from his childhood: if you see her and scream, you will never speak again.
OVERALL
For Fans Only

In 1984, a low-budget little fright flick called 'A Nightmare on Elm Street' appeared out of nowhere to revitalize the dying slasher genre. Spawning over six sequels and turning its demonic villain Freddy Krueger into a pop culture superstar, Wes Craven's inventive sleeper launched a franchise whose iconographic brand of dream-inspired horror remains seminal to the genre. Surprisingly, however, there were few overt rip-offs to follow -- perhaps because Freddy himself was the logical conclusion of nearly a decade's worth of cinematic slashers that had preceded him.

Well, it took nearly twenty-five years, but we finally have our first unofficial 'Nightmare on Elm Street' remake: 'Dead Silence.' This oddity of a horror flick from 'Saw' creators James Wan and Leigh Whannel so clearly lifts its core villain and central premise from the 'Elm Street' series that it's hard to believe it was released earlier this year and not back in Freddy's heydey. Unfortunately, 'Dead Silence' isn't an effective Xerox, so any thrill of nostalgia the film initially provides is short-lived.

As the plot is so dependent on its twists and turns, I'll keep the recap to a minimum. Our story begins when Jamie (Ryan Kwanten) finds an old ventriloquist dummy that has been dropped on his doorstep, with no note attached. Only minutes later, his poor fiancee Ella (Amber Valletta) ends up dead, her face contorted in a grotesque parody and her tongue ripped out. With the suspicious Detective Lipton (Donnie Wahlberg) hot on his trail, Jamie tracks the doll back to a creepy, abandoned old New England town that makes the one in 'Silent Hill' look like a thriving metropolis.

Here the story heats up, as we slowly discover the backstory behind the town's resident bogeywoman, Mary Shaw. Seems she was once a local ventriloquist with a fondness for the macabre who was believed responsible for several missing children -- "Beware the stare of Mary Shaw," the Krueger-esque nursery rhyme goes. After being tracked down and executed for her apparent misdeeds, she has haunted generations of townspeople from beyond the grave by wreaking havoc on the town. Needless to say, Jamie will have to fight the unimaginable if he hopes to solve her riddles and finally end her curse once and for all.

Mary Shaw's backstory is, of course, so similar to the death and rebirth of Freddy Krueger that she may as well be his twin sister. But visually speaking, 'Dead Silence' is a departure from 'Elm Street' flicks. Seemingly inspired by the classic Universal monster movies of the '30s (with their gothic art direction and deep black & white photography), director Wan ladles on the cobwebs and decaying mansions, and so desaturates his image that 'Dead Silence' almost looks monochromatic. Unfortunately, such visual pizzazz is no substitute for a coherent story and likable characters.

Quite frankly, 'Dead Silence' is a boring, plodding, unfocused mess -- the story has more holes than Freddy Krueger razoring his finger-claws through a mound of Swiss cheese. Character motivation is either non-existent or nonsensical, while most scenes feel pieced-together and randomly constructed, as if Wan threw up the pages of the script and filmed them in the order that they hit the ground. Even more disappointing, the film's marketing hook of scary puppets is pretty much tossed out the window, as Mary herself takes center stage most of the time.

Then there are the film's performances. No offense to Kwaten, but he appears to have been cast more for looks than talent. His line readings are incredibly stilted, and he just can't seem to hold his own against the enormous production design and a narrative that's often incomprehensible. Among the supporting players, Wahlberg at least seems to have some fun with a character that is straight out of Movie Detective Cliches 101, while the underrated Bob Gunton ('Shawshank Redemption,' TV's 'Desperate Housewives') shines in a far-too-limited role as Jamie's mean old daddy.

Ultimately, had 'Dead Silence' been really scary, it could still have been fun regardless of how poorly constructed it may be. But unfortunately, here too, the film fails. The over-the-top set design is distancing, rather than enveloping (that abandoned old town is about as believable as a leftover set from Universal Studios' yearly "Fright Fest"), while the dead-eyed dummies are only creepy to a point. In the end, without a truly terrifying villain, an engaging story or decent characters, 'Dead Silence' rings as hollow as its puppets.

(Note that this HD DVD comes billed as an "Unrated" version, boasting one minute of additional footage deemed too shocking for the R-rated theatrical version. Having seen both, I can say that the added material is slightly gorier, but adds nothing to the film's overall effectiveness.) 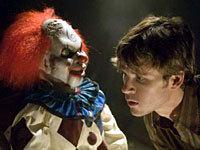 I had the misfortune of originally seeing 'Dead Silence' in a near-empty theater on a rainy Sunday afternoon (a fate seemingly destined for go-nowhere horror flicks like this), and while I can't say I love the film's visual look, this 1080p/VC-1 encode does accurately match the experience I had that day at the cinema.

Presented in its original 2.35:1 aspect ratio, 'Dead Silence' certainly makes nice use of its wide frame, as director of photography John R. Leonetti uses every inch of the space he has. The print itself is also in excellent shape, as are blacks, which remain rock solid.

Colors, on the other hand, are a bit more troubling. Purposefully desaturated with only splashes of intensity, the effect results in some chroma noise and some slight bleeding. Contrast also tends to vary, with some dark scenes looking very flattened out while others are very harsh and high-key, resulting in blooming whites. Detail follows suit -- some shots are very three-dimensional (particularly the effective end sequence), while others look more akin to a good standard-def DVD.

Again, since these issues seem to stem from the source, and not the transfer, I can't fault this HD DVD too much (hence the high score), but the visual inconsistencies of the movie itself make this a tough one to love.

The sound design for 'Dead Silence' almost seems schizophrenic. It's as if the filmmakers couldn't decide between a low-key soundtrack that harkens back to the moody, minimal classics of Universal's monster movie era, and a loud, neo-heavy metal stinger soundtrack more common to horror movies today, so they just did both. Unfortuntely neither approach soars in this Dolby Digital-Plus 5.1 surround track (1.5mbps) track.

On one side of the coin, the film's atmosphere moments (usually involving very looooong, spooky shots of immobile puppets) are too restrained, and lack any sustained presence in the surrounds. Conversely, the jarring stingers that punctuate the "shock" moments in the movie are too bombastic As presented here, they're not scary -- they're just obnoxious.

Dialogue, meanwhile, struggles to find its place in between these two extremes. I found myself wanting to throw my remote at the screen on more than a few occasions, after cranking the volume up to hear what the actors were saying, only to be have my eardrums assaulted by screaming stingers a moment later.

Again, to be fair -- not unlike the video -- my issues with the audio on this disc stem largely from the source material. In fact, technically speaking, this track is more or less up to snuff, boasting tight bass and solid dynamic range. Still, I think most will find the sound design on this one way too self-conscious to be truly effective. 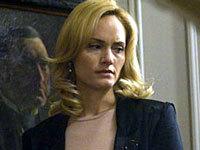 Seeing as 'Dead Silence' failed to do much business at the box office, it shouldn't surprise that Universal hasn't created much in the way of impressive supplements for the film's disc debut. Arriving on standard-def and high-def formats simultaneously, this is certainly an acceptable package, but it's hardly memorable.

First up are three featurettes. All are of the EPK variety, featuring a series of production interviews with the main cast and crew.

"The Making of 'Dead Silence'" (12 minutes) is the funniest of the bunch, as various producers and executives wax idealistic about harkening back to the classic horror films of eons past. Of course, no one mentions Freddy Krueger or every other slasher/ghost story 'Dead Silence' so blatantly rips off.

"Mary Shaw's Secrets" (7 minutes) examines the backstory of the film's central character. I found this one the most interesting of the three featurettes, although I'm a bit of a sucker for hokey horror movie villain mythology, even one as derivative as this.

Finally, "Evolution of a Visual FX" (4 minutes) dissects a specific scary sequence from pre-production mock-up to final shot. This one's standard making-of stuff, but be sure not to watch it before you see the movie, as it's something of a spoiler.

Next are nearly 19 minutes worth of Deleted Scenes, including an Alternate Opening and an Alternate Ending. Most are dull scene extensions or character/plot bits that add nothing to the movie, but the Alternate Opening does generate some interest by better fleshing out the backstory of Mary Shaw. Note that many of these scenes are rough, with large sections missing effects or key post-production sound.

Rounding out the set is a music video for Aiden's "We Sleep Forever," which, in the grand tradition of movie-inspired videos, is a bunch of film clips intercut with the performance.

Note tht Universal has not provided any theatrical trailers for 'Dead Silence,' and that all of the video-based extras outlined above are provided in 480p/i/MPEG-2 video only.

As a life-long horror buff, I was disappointed by 'Dead Silence.' While the film hints at a back-to-basics approach to the genre, ultimately it's just a plodding 'Nightmare on Elm Street' rip-off, only twenty years too late. As an HD DVD release, this one fares somewhat better. While the source elements have their issues, both the video transfer and the sound accurately reproduce the film's theatrical presentation, and there's a slim but solid package of supplements.

Sale Price 11.99
Buy Now
3rd Party 5.95
In Stock.
See what people are saying about this story or others
See Comments in Forum
Previous Next
Pre-Orders
Tomorrow's latest releases