Overview - On a family outing, a grandfather, his son, and his grandson encounter a hired killer.
OVERALL
Skip It

Ah, the straight-to-video release. They're usually host to low budget sequels, post-grad film school projects, or films otherwise gone awry. For movie fans, they're often the equivalent to dropping your life savings on a losing roulette spin in Vegas. But when a straight-to-video release features lead actors like John Cusack and Morgan Freeman, it would immediately seem to have a little more credibility -- after all, that sort of star power has to make a better movie... right? Think again.

'The Contract' focuses on a struggling single-father named Ray Keene (John Cusack), who also happens to be an ex-cop. Desperately seeking to reconnect with his son Chris (Jamie Anderson), Ray arranges a camping trip for the two in the mountains. While hiking, the father and son come across two men struggling in the river -- one is a dying federal agent, and the other is his prisoner Frank (Morgan Freeman) who was being transported to a government facility before a rescue attempt sent their vehicle into the river. The agent gives Ray his gun and instructs him to bring Frank to the authorities, thus setting the rest of the plot in motion. Ray must now contend with Frank, patch up his relationship with his son, avoid a team of mercenaries hot on his tail, baby-sit some new campers who join them along the way, and squeeze in time for a budding love interest. If that sounds like a lot for one film, take note that that's just a summary of the film's main plot points.

While you might think that an A-level cast would be able to save an over-crowded and poorly conceived screenplay from becoming an awful film, 'The Contract' unfortunately loses all of its promise within the first ten minutes. Granted, Cusack and Freeman do a commendable-enough job with what they're given, but its not enough to credibly sell the film's characters or its situations. Actor-turned-director Bruce Beresford even fumbles key fundamentals like continuity, infusing the film with the tone and aesthetic of a cheap cable-television flick.

Rounding out the patchy experience are stale character beats (one of the villains continually pauses to play online chess in the forest on his laptop), aimless plot developments (the contrived introduction of a newly single-woman for our single-father), and generally clumsy action scenes -- a decent helicopter assault brought me out of my cinematic coma, but the car chases are the worst I've seen since the original 'Saw.' The only interesting moments in the film revolve around Frank's unexpected kindness to Ray and his son -- there's really a great film in this idea and I wish the entire story focused on this one aspect more coherently.

Most depressing of all is the fact that 'The Contract' blatantly rips scenes directly from other movies (the most transparent of which involves two mercs commandeering the helicopter -- a sequence that's nearly a shot for shot recreation of the same moment in 'Cliffhanger'). This sort of scene-plagiarism goes far beyond the realm of homage as it is repeated over and over again to the point of absurdity -- at one point, I found myself having a mildly good time just identifying the better films at the root of a majority of the scenes.

Unfortunately small pleasures like these are are the exception to the rule in 'The Contract,' as even hardcore fans of Cusack or Freeman's work are likely to struggle to find much to enjoy in this one. A cinematic dud on almost all counts, ultimately the only viewers that 'The Contract' may remotely appeal to are those with a fond sense of nostalgia for weaker '80s action. 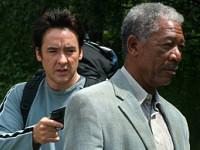 At least 'The Contract' offers a solid video presentation. The debut HD DVD release from indie distributor First Look Pictures, the technical quality of this 1080p/VC-1 transfer is a lot better than a lot of other high-def titles sitting next to it on store shelves. Colors are rich, blacks are inky, and the film has a nice three dimensional appearance in spite of inconsistent grain levels. Detail is impeccable and sharp enough to see every pore, hair, and leaf on the screen. There is a bit of noise that pops up in a handful of the nighttime scenes (watch the shots of the forest as Cusack stares out of the cabin window near the end of the film), but it isn't prevalent enough to be a distraction. In fact, at first glance, 'The Contract' seems to be doing everything right.

Alas, there are a few directorial decisions that are likely to make viewers see this as a less stunning presentation than it might have been. It appears as if the film was shot using a variety of different film stocks and lighting techniques, which leads to a somewhat disjointed visual experience -- some scenes have overblown contrast, a few are underexposed, and others are more naturalistic. Again, none of these issues appear to a reflection on the technical proficiency of the transfer itself, but they do make for an inconsistent and sometimes amateurish look. Still, overall, this is definitely an impressive first showing for First Look.

Featuring both a DTS 5.1 surround track and a Dolby Digital-Plus 5.1 mix. the audio package also seems to suffer from the limitations of the production itself. Although the DTS mix is slightly louder, after some volume matching both tracks sounded identical to my ear.

On the plus side, dialogue is crisp and layered nicely in the soundscape, the bass is boomy and natural, and the dynamics don't have any major issues.

On the not-so-good side, effects and atmosphere generally sound unnatural, with gunfire and explosions clanging as if they were taken from a consumer-level sound effects CD, and ambiance reduced to obvious cracks and crackles that seem trapped in the rear channels alone. Most noticeably, channel movement is generic and pans slap from one speaker to the next without any subtlety or realism. While not a complete disaster, each of these issues made it progressively harder for me to immerse myself in the track as the film wore on, ultimately delivering an only mediocre sound presentation.

Porting over all of the extras from its concurrently-released standard DVD counterpart, this HD DVD release includes both a 22-minute featurette called "Inside the Contract" and a Photo Gallery.

Sadly, neither feature is terribly worthwhile -- the photos are nothing you won't find on the web, and the featurette is just your typical talking heads piece. Freeman and Cusack pop up once in a while, but their overwhelming absence suggested to me that they realized what sort of film the production was going to birth. Each actor names the other as the main reason for their involvement and I imagine them giving each other sidelong glances of regret as the shoot proceeded.

(Note that the featurette is presented in 480i/p only.)

Don't be fooled by the presence of John Cusack and Morgan Freeman in 'The Contract' -- even two actors of their caliber can't save this sinking ship. The video transfer on this debut high-def release from First Look Pictures is surprising good, but the audio and the supplemental packages both leave a lot to be desired. If you just can't resist seeing these two actors on screen, be sure to rent this one long before you consider buying it.

Sale Price 19.94
Buy Now
3rd Party 12.99
In Stock.
See what people are saying about this story or others
See Comments in Forum
Previous Next
Pre-Orders
Tomorrow's latest releases