The Charles Dickens classic "Oliver Twist" is one of the most adapted literary works in the history of film and television. In fact, an imdb search for the title yeilds no fewer than 23 matches (I don't know if that's a record, but it should be). The most famous adaptation dates back to 1948, when David Lean crafted an outstanding version starring Alec Guiness as Fabin and Anthony Newley as the Artful Dodger. Alas, that version has proven so indelible that the numerous theatrical and telefilm versions made since have never quite matched it. So when Roman Polanski announced in late 2004 that he was tackling the Dickens tale as the follow-up to his Oscar-winning comeback 'The Pianist,' eyebrows were certainly raised. Why make yet another version of a story told so many times before -- did the world really need another version of 'Oliver Twist?'

Of course, it's never wise to count Polanski out. Sure, he's never lived down the his infamous U.S. conviction on statutory rape charges in the late '70s and his subsequent exile to France. Nor has he ever fully reclaimed his status as a major box office force that he enjoyed in his glory days, with such blockbusters as 'Rosemary's Baby' and 'Chinatown.' (In fact, aside from 'The Pianist,' Polanski's filmography over the past two decades is pretty dismal, with decent efforts like 'Frantic' hardly compensating for misfires like 'The Ninth Gate' and the woeful 'Pirates.') Yet Polanski's name still commands a certain cache -- enough so that his name above the title ensures if not a guarantee of quality, than at least an interesting time at the movies.

Which is what makes Polanski's surprisingly pedestrian take on 'Twist' all the more disappointing. In order to retell a story as well-known and seminal as 'Oliver Twist,' it's almost compulsory that a director (especially a director of Polanksi's stature) bring a fresh perspective to it. But while he certainly puts on a handsomely-mounted affair, Polanski takes no real chances with the source novel -- and that's a real pity.

On the bright side, the director's by-the-book approach gives us all the big scenes and the classic moments, starting with the famous "Oliver Twist wants seconds?!" moment right after the opening credits. The production design and locations look authentic, and faithful to Dickens. And in his role as little Oliver Twist, child actor Barney Clark turns in a fine, charming performance -- he may be a poor man's Freddie Highmore ('Charlie and the Chocolate Factory,' 'Finding Neverland'), but that ain't a bad thing.

If Polanski brings anything unique to the material, it is a sense of Harry Potter-esque humor and light whimsy. In fact, this film's visual style and the very theatrical manner of the adult performances are at times a bit too close for comfort. In particular, Ben Kingsley hams it up as Fabin under pounds of latex. It's a fine, enjoyable turn, but strangely desperate -- as if Kingsley is actually auditioning for "Lemony Snicket's Oliver Twist and the Order of the Phoenix." Perhaps if Polanski had really pushed this surreal direction, his 'Oliver Twist' might have connected with younger audiences -- the ones raised on prepubescent wizards and modern CGI effects. Instead, taken as a whole, 'Oliver Twist' still just feels conventional. And coming from Polanski in particular, that's a real disappointment. 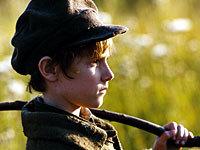 Watching this Japanese HD DVD edition of 'Oliver Twist' wasn't particularly easy as the entire disc -- packaging and menus -- is almost entirely sans English. However, with thanks to Amir Majidimehr from Microsoft (via Josh Z. on our forums), we now know that this HD DVD is presented in 1.78:1 widescreen and 1080p/AVC MPEG-4 video. (Note that the "1080i" label on the packaging refers to the expected output resolution of HD DVD players, not to the encoding on the disc).

All things considered, it's a generally strong, vibrant image. The source looks great, with nary a blemish to be found. The film has a classic feel, with a film-like look that sports some appropriate grain, but is otherwise quite clean. Contrast is not overdone, with nice and full whites that retaina natural, textured appearance. The movie's visual scheme is intentionally grimy, with lots of acidic-looking yellows and greens, and plenty of dull grays, but fleshtones remain accurate, and the transfer has great pop despite such a dour cast.

Having said all that, I do have a few caveats. Blacks are not always spot-on -- many shots appear slightly washed out, though it is surprising how much depth the transfer retains. Colors can also appear a bit too oversaturated, which is particularly obvious in a few cases where skintones look a bit digital. Finally, there is a very slight amount of black crush in the shadows, which helps contrast but lessens detail.

Still, overall I was pleased with the look of the transfer -- this one squeaks by with a solid four-star rating.

Also included on this disc are two Dolby Digital-Plus 5.1 surround tracks (both at 640kbps) -- one in English and one in Japanese. Unfortunately, neither get much of an opportunity to flex much muscle, as the film's sound design is quite muted, boasting little in the way of pronounced score, or even ambiance.

Surrounds are generally flat, with discrete effects few and far between, and hardly sprightly when they do appear. Atmosphere fares only a little better, as some outdoor scenes delivering a modicum of immersion. And while technically speaking, the track is solid, boasting good dialogue reproduction and fairly spacious midrange, it all still feels a bit too quiet. Even at a decent volume, this one comes across as remote and distant. I felt like Oliver Twist -- "I'll have more, please!" 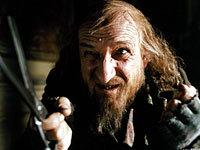 There are no real supplements, only three Theatrical Trailers -- all for 'Oliver Twist,' and all presented in 480i/MPEG-2 video only.

Roman Polanski's 'Oliver Twist' may be the most faithful adaptation of Dickens ever attempted. Unfortunately, that makes for a rather dull, uninspired outing. As an HD DVD release, this one boasts a strong video transfer and a technically solid soundtrack. Unfortunately however, a lack of supplements and the high exchange rate for this Japanese Import will probably make 'Oliver Twist' a tough sell for most audiences. But if you're a die hard Polanski fan, and/or if you're determined to this movie on HD DVD, here's your chance...

List Price $45.99
Go To Store
See what people are saying about this story or others
See Comments in Forum
Previous Next
Pre-Orders
Tomorrow's latest releases