As any frequent visitor to our forums area is probably well aware, the HD DVD/DVD combo format has long been a source of contention among HD DVD early adopters. Introduced by the studios as a way to ease standard-def DVD consumers into buying high-def discs ("future-proof your DVD collection!"), the double-sided combo discs sport a standard DVD on one side, and an HD DVD on the other.

But while combos may be intruiging to consumers who haven't yet made the leap to high-def, the higher pricetag for these releases (combined with the fact that no HD DVD-only alternative is offered) has left many HD DVD fans feeling burned as they've had no other option other than to pay more for a standard-def flipside they'll never use.

As recently as January of this year, things looked pretty bleak for the anti-combo camp when Universal Studios Home Entertainment pledged that 90% of its 2007 HD DVD releases would take the form of combo discs.

But then, in an abrupt about-face only two months later, Universal appeared to change its combo strategy, announcing that it would discontinue production of the HD DVD/DVD combo editions of 'Unleashed' and 'Army of Darkness,' and would re-issue both films on HD DVD without their standard-def flipsides. Since then, the studio has stopped releasing any of its catalog titles as combo discs, and has instead reserved the hybrid format only for more recent theatrical titles released day and date with the standard-def DVD.

So now, with this week's re-issues of 'Unleashed' and 'Army of Darkness,' the combo-haters finally get what they've been asking for. But as we found while revisiting both titles, these first-ever high-def re-issues are not without their trade-offs...

'Unleashed' is nothing if not unusual -- the original title of the film outside of the U.S. was 'Danny the Dog,' and that just about sums it up. Jet Li stars as a man raised as a canine (complete with hi-tech dog collar around his neck) and trained to be the ultimate fighting machine. Bob Hoskins co-stars as his spit-spewing, scene-chewing captor, along with Morgan Freeman as a blind piano teacher slash Mr. Miyagi mentor.

Released theatrically in 2005, it seems no one quite knew what to make of 'Unleashed.' Its plot is obviously absurd, but it never quite crosses over to 'Showgirls'-style camp; meanwhile, by focusing more on its dramatic elements than on pure action, the film failed to a score a lasting appeal with what should have been its core audience of die-hard action fans.

But while 'Unleashed' may be something of a rudderless production, it's not one without its positive attributes.

The first, and most obvious is Jet Li himself. Though he's displayed a remarkable, riveting intensity in such epics as 'Hero,' 'Romeo Must Die' and 'Kiss of the Dragon,' Li has largely suffered in the US from the misconception that he is little more than a humorless Jackie Chan. 'Unleashed' is perhaps Li's finest work to date, as he grounds what could have easily been a completely ridiculous character with a genuine pathos that's made all the more impressive by his extremely limited use of dialogue in the film, leaving only his physical mannerisms and facial expressions to do the talking.

And while the film may disappoint action fans who demand non-stop pyrotechnics, 'Unleashed' does boast a couple of impressive, over-the-top sequences that truly stretch the boundaries of genre -- the film's opening five minutes set the bar from the get-go, with Li's virtuoso choreography and pure physicality always a wonder to behold. (Even when I could scarcely believe what was happening onscreen, I was never less than riveted by Li's amazing abilities.)

Of course, none of these factors make 'Unleashed' a great film (or even a good one), but to its credit, at least it's different, and I'd much rather praise a film that aims high and misses than one that shoots for the lowest common denominator and scores. So if you are looking for a more unusual example of the martial arts/action genre, 'Unleashed' might be worth a try. Just remember: you've been warned. 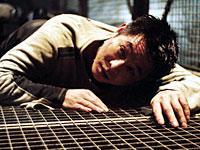 'Unleashed' received a very pleasing 2.35:1 widescreen transfer on its previous HD DVD combo version, and the same 1080p/VC-1 presentation is included on this re-issue. As I noted in my earlier review, this transfer is very a nice improvement over the standard DVD version, with superior detail and bolder colors.

Matching its unusual premise, 'Unleashed' also boasts an interesting visual aesthetic. The dominant colors are an acidic yellow and a rich cyan, which makes for a consistently eye-popping picture. Sure, the image is rather blown-out with blazing whites, and mid-tones somewhat compressed to give an intentionally somber, confined look, but I liked how colors are very vibrant and unreal, yet not too processed to cause smearing, noise or a loss of detail. Despite its many obstacles, this transfer manages to retain a sharp and three-dimensional look, with fine details visible even in long shots and in the darkest scenes. The film's frequent bursts of fast-cut action also pose no compression problems, nor any noticeable instances of artifacts, blocking or pixelization. Again, a very solid, eye-popping transfer all around.

Like the video transfer, The Dolby Digital-Plus 5.1 surround track (1.5mbps) on this disc is exactly the same as the one that appeared on the earlier combo edition. (Note, however, that only the standard-def DVD side of the combo disc contained a DTS track. That track is now absent on this re-issue.)

As I wrote in my review of combo disc, the Dolby Digital-Plus mix included here clearly bests the previous DVD release, with very full mid- and high-range that gives the track considerable pop. Surrounds enjoy imaging that is nicely transparent between channels, and subtle atmospherics come through with fine clarity. However, the film's sound design tends to be uneven, with action scenes benefiting from a nice 360-degree soundfield but everything else paling in comparison. Also distracting to me (although common to martial arts soundtracks), any sound effect relating to a karate move or crunching bones is so obviously pumped up in the mix that it becomes rather humorous. But if you're a fan of the genre, you probably wouldn't have it any other way. 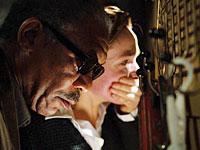 It's here where the original 'Unleashed' HD DVD/DVD combo release and this re-issue differ, and unfortunately the news is not good.

Alongside 'National Lampoon's Animal House,' 'Unleashed' was one Universal's first two HD DVD/DVD combo releases, and as early HD DVD fans will remember, the studio's initial combo efforts tended to give short thrift to HD DVD fans by putting most (if not all) of the disc's extras on the DVD side of the platter. To the studio's credit, they rectified this problem on later combo releases, but that doesn't seem to help this HD DVD-only re-issue of 'Unleashed.' Gone is the DVD side, and gone, too, are all the extras.

Yep, there's nothing here. Not either of the two featurettes that graced the combo release, nor the two promotional music videos. To be fair, the material was hardly that exciting, but still -- how hard would it have been for Universal to re-press this HD DVD to include the extras? Even better, if they really wanted to make things right with HD DVD fans, Universal could have included the extended cut of the film, which was previously released on standard-def DVD, but not offered on the HD DVD combo release -- that really would have made a nice extra for this re-issue.

Alas, we get nothing.

While Jet Li gives a surprisingly emotional performance, 'Unleashed' is a strange movie that's probably destined to languish on the back shelf at the video store.

Combo-haters will be happy to see this HD DVD-only re-issue of the film, which boasts the same great video and audio as the original release, although unfortunately Universal didn't bother to port over any of the standard-def extras when it dropped the DVD side from this edition. On the bright side, this edition is $5 cheaper than the combo, so in terms of value for the money, things more or less net out.

Sale Price 9
Buy Now
3rd Party 9
In Stock.
See what people are saying about this story or others
See Comments in Forum
Previous Next
Pre-Orders
Tomorrow's latest releases