Moviegoers, film historians, and critics have called David Lynch many things, but no one's ever called him predictable. Flinging himself from one extreme to the next, his canon is filled with edgy, complicated material that often defies the imagination. Arguably his finest work, 'The Elephant Man' remains one of his most accessible films even as it challenges its audience at every turn.

Based on a true story, 'The Elephant Man' focuses on two polar opposites in 19th century England -- a deformed man named Joseph Merrick (John Hurt) and a physician named Frederick Treves (Anthony Hopkins). Mistreated his entire life, Merrick survives by working as a monstrous circus freak until he catches the attention of Dr. Treves. The surgeon expects his patient to possess a simple, bestial nature, but is fascinated to find the soft heart and stark intelligence of a scarred human being. But as word spreads of Merrick's dual nature, so too does his notority, leaving Dr. Treves struggling to avoid exploiting the disfigured man he had intended to help.

First released in 1980, the film looks as if it was made decades before color splashed its way onto the screen. In order to achieve this unique look, not only did Lynch shoot the film in black and white, he also used equipment, techniques, and styling dating back to the days of early cinema. The look is so authentic that if it weren't for the modern actors, it would easy to mistake 'The Elephant Man' for one of the first films released in the years following the silent era.

The performances, however, avoid the overreaching of early screen acting, with each actor bringing great depth and authenticity to their characters. The film is anchored by the emotionally affecting friendship between Hopkins and Hurt. Hurt's Merrick tears me up a little more each time I see the film, while Hopkins' raging inner-conflict as Dr. Treves remains a nuanced and consistently fascinating performance. Beyond these two powerhouses, Anne Bancroft, John Gielgud, Wendy Hiller, Freddie Jones, Hannah Gordon, and a young Dexter Fletcher are just a few of the supporting cast members who turn in equally stellar performances, allowing Hurt to draw from their combined cruelty, greed and empathy to craft his portrayal of a truly sympathetic man.

Normally, a film's cinematography would receive a passing mention in a review of this sort -- but allow me to give this one its due. Cinematographer Fred Francis is nothing short of a visionary who takes on both the droll and the bizarre from Lynch with equal intensity. As a result, the visuals, composition, and contrasting themes on display bring as much to the film as its stars. Shadows and light are expertly layered across each shot and the photography is often breathtaking. Francis's attention to detail and form should be at the center of every young cinematographer's studies as his eye revels in the film's visual artistry and simplicity.

Even as a David Lynch fan, I initially resisted 'The Elephant Man' because of its throwback stylings. Don't make the same mistake and miss out on this nuanced portrayal of humanity and those we overlook. Even those who may have had a hard time with Lynch's other work should spend an evening with this one -- you'll be surprised how much 'The Elephant Man' cracks even the hardest of hearts without resorting to sappy sentimentality. 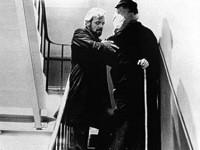 While it doesn't quite achieve the sheer perfection of a more recent black and white release like 'Good Night, and Good Luck,' the video quality of 'The Elephant Man' is quite impressive -- especially for a 27 year-old film. Presented in 1080p using the VC-1 codec, the picture is clean, crisp, and displays notably fine object detail. Deep blacks, decent shadow delineation, and sharp textures add dimension to the transfer and make it pop off the screen. The blooming and halos that plagued my (US) standard-def DVD edition are gone, and there's no artifacting, source noise, or color banding, either.

Having said all that, the video does have a few problems. Print dirt, contrast wavering, and small scratches still occasionally flicker across the screen every now and then, while the generally moderate grain level spikes distractingly high during shots that fill large portions of the screen with white light. Also, this high definition presentation uncovers some inconsistencies in Hurt's prosthetics, supporting actor makeup, and false beards. Worst of all, there are a handful of shots that are much softer than the rest of the film. For a couple of examples, take a look at the moment (in chapter 10) when Dr. Treves helps Merrick after a beating from Bytes, or the shot near the end of the film when Merrick is in a cage talking to an assortment of circus freaks. Happily, each of these issues occur infrequently enough that they don't detract much from the overall quality of the transfer. 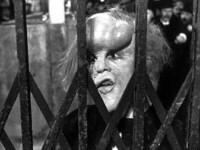 This one's tough. While I'd like to give 'The Elephant Man' a higher audio score because the stereo mix on this HD DVD arguably enhances the illusion that this film was made in the early days of cinema, the most recent standard-def DVD release of 'The Elephant Man' here in the U.S. had a far superior remixed 5.1 surround track that was supervised and approved by David Lynch himself.

As is, the DTS-HD Master Audio 2.0 on this French HD DVD does seem to be faithful to the original theatrical release of 'The Elephant Man.' Dialogue is crisp and well prioritized, movement is subtle from left to right, and the effectiveness of the film's ambiance is surprising for a stereo mix. There are a few moments when dialogue is intentionally obscured by sound effects, but it's clear in these instances that certain lines are supposed to be tough to catch. Also apparently intentional (although notably reversed in the Lynch-supervised 5.1 track), the sound design mimics the tingy trebles and weak bass of older films.

All things considered though, this track just can't compare to the 5.1 track on the standard DVD. That edition managed to retain the illusion of age in certain elements of the sound design, but still made great use of surround sound opportunities.

While the most recent U.S. standard-def DVD release of 'The Elephant Man' included a half-hour documentary, a makeup featurette, and a narrated photo gallery, this French HD DVD edition comes only with an ugly theatrical trailer for the film.

While I heartily recommend the movie itself, it pains me to say that this HD DVD import of 'The Elephant Man' is something of a disappointment. Although it boasts a solid high-def visual presentation, the sub-par sound package and a complete lack of supplements make this one a tough sell, especially given the high exchange rate. Hopefully 'The Elephant Man' will be released in high-def in the U.S. with more care. Either way, be sure to see this film -- it's a classic in every sense of the word.

List Price $33.50
Go To Store
See what people are saying about this story or others
See Comments in Forum
Previous Next
Pre-Orders
Tomorrow's latest releases