Overview - Few bands are more closely associated with Montreux than Deep Purple and there was simply no other contender when it came to choosing the act to headline the closing night of the 40th Montreux Festival in 2006. The band duly delivered one of their finest live performances, sprinkling songs from their latest album “Rapture Of The Deep” through a set chock full of their classic tracks. There was even a brand new song “Too Much Fun” written especially for the occasion and, of course, a show-stopping performance of “Smoke On The Water."
OVERALL
For Fans Only

One of the earliest and most influential heavyweights of hard rock, Deep Purple is a band haunted by dysfunction and dissatisfaction. Since the group's founding in 1968, it has survived a multitude of member changes, an eight-year hiatus, and decades of binge drinking and substance abuse. The band's most notorious lead guitarist, the ego-centric Ritchie Blackmore, was an overwhelming source of conflict and fled and rejoined the band on numerous occasions. Other band members who thought themselves irreplaceable soon learned they were simply cogs in this fan-driven machine.

But despite the ever-evolving line-up, Deep Purple has managed to retain a tonal consistency that continues to keep the band in the public eye to this today. Over the years, the group has sold 100 million records worldwide, and their latest major performance -- 'Deep Purple: Live at Montreux 2006' -- has made its way to HD DVD, bringing with it a nice amount of fan anticipation and excitement.

The band has appeared at Montreux many times in the past, but this show marks a blend of old favorites and new songs from their acclaimed 18th studio album, 2005's "Rapture of the Deep." In its latest incarnation, the band's lineup features lead vocalist Ian Gillian, guitarist Steve Morse (who joined the band in 1994), newly appointed keyboardist Don Airey, original bassist Roger Glover, and drummer Ian Paice.

The group certainly doesn't waste any time in Montreux -- the set list includes classics like "Pictures of Home," "Strange Kind of Woman," "When A Blind Man Cries," "Lazy," "Space Truckin," "Highway Star," "Smoke on the Water," "Hush, "Too Much Fun," and "Black Night." It also includes songs from their newer albums like "Things I Never Said," "The Well Dressed Guitar," "Rapture of the Deep," "Wrong Man," and "Kiss Tomorrow Goodbye." My only complaint with the selections is that there are just too many favorites (both old and new) that didn't make the cut. Of course, this also isn't a four hour concert so it's a minor quibble -- the songs on tap cover a broad range that gives a nice overview of the band's musical history.

In terms of the band's performance, I can't deny the pure charisma that erupts on stage in front of the Montreux audience. The vocals are so intense that singer Gillian strains his voice and the band simply rolls with it. This is a live performance at its purest where technical mishaps and the limitations of the artists don't affect the musicians in the slightest.

The trade-off is at times the music becomes so frenetic and unchecked that it fails to provide a certain familiarity to many of the band's best songs. In particular, fans who adore the early Blackmore hits will be disappointed to hear distinctly different versions of their favorite songs. While I could still recognize each rendition, I longed for the safety of a studio recording that would allow me to engage in the music, rather than just the energy of the performers on stage. Worse still, some of the guitar riffs and solos on the most revered classics sound like bar-stool imitations and I winced at the clumsiness of the more involving fret work.

All things considered, as a longtime fan of the band, I had mixed feelings about 'Deep Purple: Live at Montreux 2006.' On one hand, the latest incarnation of the band certainly puts their all into the performance, and their renditions of the group's newer songs are quite enjoyable. Hits from the band's classic era, however, don't fare nearly as well. Given the band's inner turmoil and the egos of keystone members like Blackmore, I suppose the Deep Purple concert of my dreams is impossible, but I found myself shaking my head on too many occasions to give this one an enthusiastic recommendation. 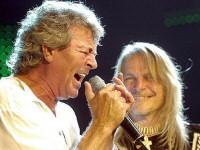 Presented in 1080i with the VC-1 codec, 'Deep Purple: Live at Montreux 2006' handles its on-screen imagery without any major technical problems. The palette is vibrant and blacks are deep, injecting the picture with a convincing level of depth. However, this is another high-def concert recording that sees its featured band bathed in highly-contrasted colors that continually cloak the sharp details of the stage. When the lights come up, the image is crisp and impressive with natural fleshtones, but these moments are brief and infrequent.

There aren't any major compression issues or clouds of source noise, but hints of artifacting still appear in the shadowy corners of the platform and in the bright stage lights. I was happy to see that there wasn't any distracting bleeding or pixilation (as I found in Eagle Vision's presentation of 'Yes: Live at Montreux 2003'), but this transfer just doesn't have the polish or substance of better live performances available on high-def disc. 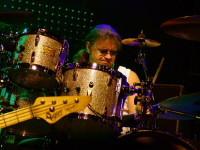 'Deep Purple: Live at Montreux 2006' features three audio tracks -- DTS-HD 5.1 surround (1.5 Mbps), Dolby Digital-Plus 5.1 surround (1.5 Mbps), and an Uncompressed PCM stereo track. All of the audio tracks represent the source material decently enough, and I couldn't pick a clear favorite. The PCM track has the best sound quality, but the DTS and Dolby mixes immersed me more effectively in the soundfield of the live performance. Ultimately, I really would've liked to see an uncompressed surround track -- instead, fans are forced to choose between high fidelity or feeling like they're more a part of the concert.

The PCM track has respectable dynamics that handle the crunching guitar strums with ease. The drum beats sound a bit thin, but the bass guitar helps to make up for the lackluster low end presence. The Dolby and DTS tracks are akin to a solid audio CD, but are technically more problematic, essentially distributing the sound to each of the channels at different volume levels. The result is a lazy track that tricks the listener into believing they're getting surround sound when the rear speakers are simply rehashing the same audio as the boisterous front channels.

In short, while each of the tracks are certainly acceptable, none deliver the kind of exceptional audio you hope for in high-def concert releases of this sort. 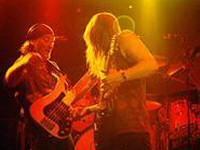 Both of the special features found on the standard DVD edition of of 'Deep Purple: Live at Montreux 2006' have been ported over to this HD DVD release, and combined they comprise a nice package for a live concert disc of this sort.

The most impressive extra is a full recording of a second Deep Purple performance at a British Hard Rock Cafe in 2005 (59 minutes). The show is arguably more rewarding than the main Montreux concert, with the band sounding more precise and on key as they barrel through spirited renditions of "Fireball," "I Got Your Number," "Strange Kind of Woman," "Kiss Tomorrow Goodbye," "Lazy," "Rapture of the Deep," "Wrong Man," "Perfect Strangers," "Highway Star," and "Smoke on the Water." Granted, the audio quality leaves a lot to be desired (the setting is small and the acoustics are ugly), but it was proficient enough to keep me listening.

Next up is a collection of "Interviews" (24 minutes) in which the current band members discuss a variety of topics, including the song "Smoke on the Water," the change-over from keyboardist John Lord to Airey, their personal history with Montreux, and their fans. The best bits involve Gillian and their candid/feisty comments on Blackmore's exit from the band.

(Note that all of the extras listed above are presented in 480i/p only.)

'Deep Purple: Live at Montreux 2006' is a mixed bag performance from a band that has survived decades of turmoil. Fans will have a good time with this disc, but it's not likely to win over any newcomers to the band's classic hard rock. As an HD DVD release, this one's generally strong, boasting an above-average transfer and a nice supplements package, although unfortunately the available audio tracks force listeners to choose between quality and immersion.