Overview - America's funniest family back for seconds! Eddie Murphy is hilarious when he stars as the entire Klump family in this enormous comedy blockbuster. The hilarity begins when professor Sherman Klump finds romance with fellow DNA specialist, Denise Gaines (Janet Jackson), and discovers a brilliant formula that reverses aging. But Sherman's thin and obnoxious alter ego, Buddy Love, wants out… and a big piece of the action. And when Buddy gets loose, things get seriously nutty. Now, it's up to Mama, Papa, Ernie and Granny Klump to throw their weight around and save the day.
OVERALL
Worth a Look

When last we left chubby professor Sherman Klump (Eddie Murphy) in 1996's 'The Nutty Professor,' he had disowned the magic elixir that allowed him to transform into the hip, sexy Buddy Love (also Murphy). Life seemed to be complete for Sherman -- he may not have won the heart of his true love Carla Purty, but he did regain his self-esteem, and nothing could ever entice to again drink from the fountain of false illusions. Of course, that was before 'The Nutty Professor' grossed nearly $100 million at the domestic box office and gave Murphy his biggest hit in over a decade...

In Hollywood, where there is a till there is a way, and so for 2000's 'The Klumps,' Sherman would again find himself drinking a life-altering potion in his continued search for true love. Buddy Love is back, too, trying to woo the heart of brilliant DNA specialist Dr. Denise Gaines (Janet Jackson) who, it seems, has discovered her own secret formula to prevent aging. The hook this time, though, is that Denise is already in love with Sherman -- and it's Buddy who is the one crashing the party. Add in the entire Klump clan (all played by Murphy in various get-ups), who all have their own ideas on how Sherman and Denise's pending nuptials should come off, and you've got a recipe for comedy of epic proportions.

Like many sequels, 'The Klumps' is not so much a continuation of the original story but rather a regurgitation of its best moments. It was obvious that what worked for audiences about the first film was not the pathos inherent in the dueling-identities of Sherman Klump/Buddy Love, but rather Murphy playing a bunch of different trashy characters under tons of latex. In fact, the entire plot of 'The Nutty Professor' was secondary to its success -- audiences turned out in droves to see Murphy do his shtick, make fart jokes and generally overact to the heavens.

So we get plenty more of all of the above in 'The Klumps' -- only louder, brasher and more vulgar. There remains a sweetness to poor Sherman Klump's looking for (and in this case finding) true love, but the Denise character is all but tossed aside like a narrative annoyance. Jackson is a very likable on screen presence, but she's given little to do here but smile and react to Murphy's outrageousness -- it's a completely thankless role. And even Buddy Love often seems pushed to the sidelines in favor of new side characters or subplots that allow Murphy to summon a new creation.

In the end, of course, none of this really matters so long as 'The Klumps' can be funnier than 'The Nutty Professor.' Alas, it isn't. The first Klumps flick was never a great movie (or even a consistently hilarious one), but at least it felt fresh and invigorated. This sequel, by comparison, offers little more than a showcase for Eddie Murphy's cavalcade of latex. Admittedly, I did laugh more than a few times during the film's best moments, but with a better, sharper script and a more coherent story, 'The Klumps' could have improved upon its predecessor instead of just feeling like an inferior Xerox. 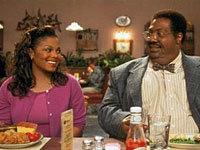 'Nutty Professor 2: The Klumps' was made four years after the first 'Nutty Professor,' and though the two films do not share any of the main creative personnel (beyond Murphy himself), the visual style of both films is surprising similar. Big, bright and flush with rich primary colors, 'Nutty Professor 2' is arguably even better looking than its predecessor.

Universal provides a 1080p/VC-1 transfer in the film's original 1.85:1 aspect ratio, and as was the case with the first film, the most impressive attribute of the presentation is the vivid colors. Primaries are loud and brash, almost to the point of eye strain. Yet oversaturation is not a problem, with hues rock solid and free of bleeding or noise. Fleshtones are an improvement over the original, however, with no red tint or other inconsistencies. Detail and sharpness are also first-rate, with the image displaying generally excellent depth and clarity. The source is also just about pristine, with only the rarest hint of dirt, and only a speckle or two, to distract. Compression artifacts are also not a problem.

All in all, a solid four star video presentation.

For 'The Klumps' audio, Universal also goes one better than the original 'Nutty Professor' by providing a Dolby Digital-Plus 5.1 surround mix (1.5mbps), plus a full-blown Dolby TrueHD 5.1 track (48kHz/16-bit).

Unfortunately, despite the generous specs, this comedy flick predictably doesn't get much in the way of exciting, inventive sound design. The only real standouts are the film's music and score, plus a few instances of strong discrete effects. Otherwise, the rear soundfield is inconsistently employed, and ambiance is never sustained or particularly strong.

Still, this is a perfectly fine soundtrack for a comedy, boasting a bright, clean presentation, with lots of lively sound effects (usually of the disgusting variety, such as burps and farts). Dynamics are very lively on the TrueHD mix in particular, with punchy bass and clean, smooth highs. Dialogue is also placed front and center, with no volume balance problems. 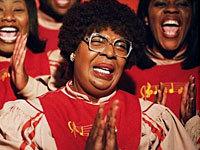 The original 'Nutty Professor' came without a single extra on any of its releases (DVD and HD DVD included). That certainly changed for the sequel, with 'The Klumps' enjoying a host of bonuses on its initial disc release that have all been ported over for its high-def debut.

First we have a screen-specific audio commentary with director Peter Segal. Since 'The Klumps,' he's gone on to carve an impressive career in A-list Hollywood comedies ('50 First Dates,' 'The Longest Yard'), but here he's just appreciative to have gotten a significant break into the big leagues. Of course, he has plenty of kudos for Eddie Murphy and his ability to create believable characters under mounds of latex, but otherwise he focuses almost exclusively on the film's production challenges. That limits the scope of the track, but Segal certainly seems to be a lively guy, so fans at least will enjoy this one.

Interestingly, this disc also has a second audio commentary track -- sort of. Billed as "A Conversation with Director Peter Segal and Producer Brian Grazer," it actually runs only about one-third of the way into the film and then just stops abruptly. Weird, to say the least, but it's an interesting enough discussion that I wish it had run longer. (Note that the same thing happened on the DVD version of 'The Klumps,' so it's not a glitch with the HD DVD.)

The disc includes only a single featurette, "Spotlight on Location: The Making of 'Nutty Professor 2: The Klumps.'" Running 24 minutes, the first half is your usual banal extended commercial, with on-set chats with the main cast and crew, and an avalanche of film clips. Luckily, the second half is better, featuring a lot of behind-the-scenes footage of makeup guru Rick Baker and his crew turning Murphy into a zillion different characters. It's pretty interesting stuff, and saves the featurette from being a total waste. There are also two Make-Up Application Shorts included, which run less than a couple of minutes and simply offer time-lapse footage of Murphy being transformed.

Next we have two Additional Scenes: "Extended Dinner Scene" and "Deleted House Fantasy Scene." The former is where the real laughs are, with Murphy being even cruder (and funnier) than what could pass by the MPAA Ratings Board in the theatrical cut of the film. There is also a 4-minute reel of Outtakes that are only marginally amusing.

Next are four Storyboard to Final Feature Comparisons. The storyboards for each are shown in the upper part of the screen, while the finished version runs in sync in the lower half.

Rounding things out is a music video for Janet Jackson's "Doesn't Really Matter," plus the film's original Theatrical Trailer.

(Note that all of the video-based supplements included on the disc are presented in only 480p/i/MPEG-2 video.)

It's not a superior sequel, nor is it even as funny as the original, but 'Nutty Professor 2' still delivers its share of comedic zingers. The same basic premise is reworked just enough to provide some fresh laughs, and Eddie Murphy proves himself once again able to wring some truly inspired parody out of multiple roles.

This HD DVD release certainly delivers on the bottom line. The transfer is eye-popping and colorful, and Universal has thrown in a full-blown Dolby TrueHD track plus plenty of supplements. To be sure, 'The Klumps' won't give your home theater much of a workout, but for fans of the film this HD DVD is an easy recommend.

Sale Price 3.01
Buy Now
3rd Party 1.99
In Stock.
See what people are saying about this story or others
See Comments in Forum
Previous Next
Pre-Orders
Tomorrow's latest releases