Overview - Dan Foreman (Dennis Quaid) is a loving husband, caring father and star ad executive. But now, life is putting him through the ultimate test. Carter Duryea (Topher Grace), a young hotshot half his age, has just become his boss. And to complicate matters, Dan discovers Carter is dating his daughter (Scarlett Johansson).
OVERALL
Worth a Look

Historically, films falling in the romantic comedy genre haven't exactly been full of surprises. Thankfully, however, a new breed of romantic comedy has emerged over the last decade that has revitalized the genre by bringing to it a newfound credibility.

At first glance, 'In Good Company' may seem like a bit of a throwback. The film tells the story of an aging ad executive named Dan Foreman (Dennis Quaid), who is forced to to report an up-and-coming young supervisor named Carter (Topher Grace) as part of a corporate shakeup. What follows is a comedy of errors that would seem to touch on every cliché in the book -- Carter falls in love with Dan's college-aged daughter Alex (Scarlett Johansson), Dan finds out his wife (Marg Helgenberger) is pregnant, and Carter desperately latches onto Dan for guidance and friendship.

But while 'In Good Company' seems to revel in introducing clichéd situations, its plotting and story development is anything but predictable. Power changes hands so often in the film that I gave up trying to anticipate what was going to happen and I just sat back and enjoyed the ride. Similarly, the seemingly typical romantic subplot ultimately takes a sharp left turn away from convention and delivers a refreshing take on the naiveté of young love. Even the relationship between older Dan and the younger Carter takes on a unique life of its own that defies what romantic comedy fans have come to expect.

Truth be told, perhaps it's unfair to label this film a romantic comedy at all -- there are laughs to be sure, but strictly speaking, 'In Good Company' isn't exactly a comedy or a romance. The majority of the film focuses on a serious examination of the mentality that accompanies age and youth. Dennis Quaid is the focal point of the story -- Grace and Johansson are just foils by which he comes to terms with his life and priorities.

Still, while the film constantly breaks expectations, its coherent and believable storyline manages to tap into genuine emotion. I felt as if I recognized each of these characters and I could identify myself and other people from my life in each of their actions and reactions. It ends up becoming a decidedly personal film that touches on acceptance, independence, fear, and (yes) love.

The film does have its flaws -- writer/director Paul Weitz occasionally seems to have a hard time choosing between the opposing tones he's set in his earlier films, including 'American Pie' and 'About A Boy.' The supporting actors often feel as if they've stepped out of the former, while the main characters seem to exist in the latter. But while the film can sometimes seem disjointed, thankfully Weitz recovers quickly and generally keeps things on track. Fans of 'About A Boy' may also be disappointed to find that 'In Good Company' fails to reveal any questionable darkness in its well-intentioned main characters. The film's villains are comically vain, and serve as the only counterpoint to the flawed compassion of the central protagonists.

Still, despite these issues, 'In Good Company' is certainly an entertaining way to spend an evening, offering up an intriguing satire on business, relationships, and aging. If you haven't seen this one yet, do yourself a favor and check it out. 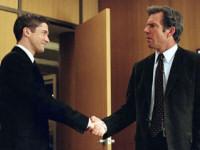 What a disappointment. Right from the opening scenes of the 'In Good Company' on HD DVD, this 1080p/VC-1 transfer's two most primary problems are immediately evident -- poor color saturation and over-indulgent edge enhancement.

To be sure, the film's color palette wasn't meant to be vivid, but as presented in this transfer, the picture is is muddled with sepia tones that weren't apart of the film's look in theaters. The high-def palette zaps the life out of even the strongest primary colors -- the office (where the majority of the film takes place) is appropriately decorated with wood-grain textures, but rather than standing out from the image, fleshtones inexplicably blend in with the walls. This is not the first film to hit high-def with a washed-out palette, but while others still have select hues that pop off the screen, 'In Good Company' feels unintentionally dull and muted.

Even worse, this transfer's edge enhancement is so obvious at times that actors appear digitally inserted into the frame. It's heavy, clumsy, and adds annoying halos around objects that don't belong anywhere near a high-def release. Viewers with large projection screens will almost certainly wince when they see how bad the enhancement is, but even those with smaller displays will notice the ugliness of the effect on this release.

Unfortunately, the transfer's issues don't end there. Artifacting is a consistent problem -- dark areas of the screen are relatively noise-free, but brighter textures display a terribly obtrusive level of noise. Skip to the beginning of chapter 7 and watch the office door in the center of the shot -- a shifting blockiness is apparent and comes back to haunt the picture again and again. There's also an infrequent waver to the contrast during some of the scenes in the office. Again, watch the wood paneling and you'll catch it every time it happens. Finally, there are several few instances where scenes are softer than they should be (particuarly when compared to their edge-enhanced foreground objects).

To be fair, there are few areas where the transfer does its job well. In a direct compare with the standard-def DVD, textures receive a bump in clarity, skin and hair are well defined, and black levels are deep while still allowing an acceptable level of visibility.

But while these are basic and inherent upgrades you'd expect from an HD DVD upgrade, overall this transfer fails to live up to its high-def potential. There's really no reason why a relatively recent release like 'In Good Company' should have a picture that's so severely plagued by these kinds of fundamental problems. 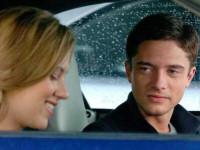 At least the audio is more impressive than the video. 'In Good Company' features a Dolby Digital-Plus 5.1 surround mix (1.5 Mbps) that presents crisp dialogue, a well prioritized soundscape, and effects that are nicely distributed across the channels. Ambiance is subtle and immersive, and despite the fact that this is a conversation-heavy flick, busier scenes set on city streets have a sudden and welcome presence in the rears. Lastly, while the musical soundtrack is packed with quieter Indie Rock fare that won't turn any heads, it does effectively waft in and out of the soundscape with smooth fades and suitable dynamics.

All in all, while the film itself won't give your home theater enough of a workout to stand out among other more go-to high-def audio packages, this Digital Plus mix handles everything tossed its way without any technical mishaps. 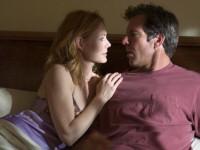 As has become customary on its HD DVD releases, Universal has included all of the extras from the original standard DVD release of the film.

First up is a group of featurettes dubbed "SYNERGY" (24 minutes). Comprised of seven smaller pieces -- "Real Life," "New York Locations," "Stars," "Youth," "Getting Older," "Editing," and "Story," together they provide a glimpse behind-the-scenes that stretches from the script's pre-production through to the film's release. The two videos named on the back of the case (the others aren't mentioned at all), "Real Life" and "New York Locations," are actually the two driest selections of the bunch. My favorites were the "Editing" and "Story" segments -- each one details how the tone of the film came to be, from the perspective of the director and the cast.

A group of "Deleted Scenes" (15 minutes) are worth checking out. While they likely would've slowed down the pace of the film, they're amusing in their own right and highlight some of the quirkiness in the film's key relationships.

Last but certainly not least is a feature commentary with Paul Weitz and Topher Grace. I had a blast listening to this track, which benefits from the fact that the two men clearly become close friends over the course of shooting the film. Lots of great anecdotes here, but they also take the time to explore the deeper themes in the film. I laughed out loud more than once and would definitely recommend this commentary to any fan who hasn't already tried it out. 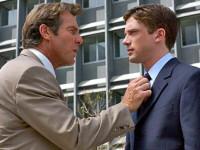 I thoroughly enjoyed 'In Good Company' -- one in a new breed of romantic comedies, the film has a distinctive voice that's warm, funny and true to life. Unfortunately, this disc offers only a moderate improvement over the standard DVD -- the audio is strong, and the supplements are identical, but the video transfer is stifled by glaring fundamental problems. If you don't already own the DVD, the overall package here is still strong enough to recommend, just don't expect much from the video...

Sale Price 0.01
Buy Now
3rd Party 1.91
In Stock.
See what people are saying about this story or others
See Comments in Forum
Previous Next
Pre-Orders
Tomorrow's latest releases