Overview - He s the heir to the Madison Hotel millions but in order to win his father s respect, and his Fortune 500 company, grown-up goof-off Billy must repeat all 12 grades of school in just 24 weeks! Comedy superstar Adam Sandler stars in this laugh-a-minute hit.
OVERALL
Give It a Rent

Perhaps more than any other comedian in film history, Adam Sandler has mined a lucrative career out of acting completely idiotic. Though there have been glimmers of intelligence and humanity in some of his work (particularly 'Punch-Drunk Love' and 'Click'), he's largely made his name being a doofus hero.

The pinnacle (or nadir, depending on your point of view) of Sandler's early cinematic efforts, 'Billy Madison' literally asks the question, "Are you smarter than a fifth grader"? Sandler stars as the titular low-IQ simpleton about to become the heir to the Madison Hotel millions. But one of the conglomerate's evil minions, Eric Gordon (Bradley Whitford) has other ideas, and fixes it so that in order for Billy to inherit his share of father's (Darren McGavin) fortune, he must to repeat all twelve grades of school. Can Billy earn his high school diploma in only 24 weeks, thwarting Eric's plot and finally winning the respect of dear old dad?

Though a little Sandler usually goes a long way for me, I will admit that I laughed a few times during 'Billy Madison' -- sometimes heartily. Sandler definitely has a knack for making even the lamest, most low-brow humor seem charmingly fun, just by the sheer innocence of his delivery. The grade school milieu is also a perfect playpen for his juvenile hijinks -- Sandler brings a sweetness to the material and wisely avoids most of the "retard jokes," etc. that often mar these types of flicks. 'Billy Madison' is certainly a one-joke premise, but Sandler manages to stretch it pretty successfully for 89 minutes.

Srill, I never found 'Billy Madison' to be genuinely clever or inspired. As strange as it may sound, there's an art to making smart satire out of cultural dumbness (see 'Pee-Wee's Big Adventure' or 'National Lampoon's Animal House'), but 'Billy Madison' never aims above the groin area. This is really the fault of the script, which pretty much wastes most of the supporting players and subplots. Though Whitford and especially McGavin (who was so memorable as the grumpy dad in 'A Christmas Story') are talented comic actors, they're given little to do here beyond overact in an effort to keep pace with Sandler. And the go-nowhere romance with Billy's hot teacher Veronica (Bridgette Wilson) seems like a deleted scene from another movie.

But bottom line, Sandler is pretty funny throughout most of 'Billy Madison.' If the sight of him doing a spastic dance to Culture Club's "I'll Tumble 4 Ya," or going postal on a group of fourth graders and pummeling them with dodgeballs is your idea of uproarious comedy, then this is your flick. I personally wish 'Billy Madison' was a little bit smarter, but as far as dumb, dumb, dumb movies go, you certainly could do a lot worse. 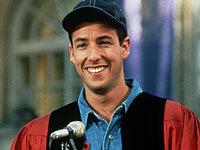 Universal offers up a 1080p/VC-1 encode of 'Billy Madison,' presented in the film's original aspect ratio of 1.85:1 widescreen, and this is relatively solid catalog effort.

The main visual attraction here is the film's very colorful and kid-like design style. The photography is almost always bright and bold, with vivid primary hues that nearly assault the eyes. There is certainly more pop here on HD DVD than on the standard-def DVD, with colors quite robust (if occasionally noisy). The clean, bright whites also pump up apparent depth, while detail is fairly strong in daylight scenes.

This transfer lags, however, when it comes to shadow delineation. Fine details seem to get eaten by a harsh crush in the blacks, and film grain and noise tend to be exacerbated in darker scenes. The print is also not pristine, with a fairly consistent amount of dirt and white speckles evident. All in all, though, a decent catalog showing from Universal.

The audio on 'Billy Madison' is definitely nothing to write home about, even for a catalog release. Typical for a '90s comedy, the movie's sound design is flat and uninspired, and packs no surprises.

Surround use is meager. I counted about a handful of barely noticeable discrete effects, and the score's presence in the mix is also unimaginative. In fact, there's so little heft to the rear soundfield that this mix may as well be stereo. Dynamic range is serviceable, with flat bass and slightly cramped highs. Dialogue sounds fine enough, though much of the dialogue has that canned, looped feel. Decidedly mediocre. 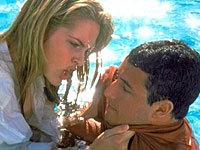 As usuall, Universal ports overall all of the standard-def extras to this 'Billy Madison' HD DVD, but in this case it's pretty slim package.

Both the 20 minutes worth of Deleted Scenes and the 4-minute reel of Outtakes are forgettable. Most of the scenes are extensions or alternate versions of existing material, while the bloopers are your standard flubbed lines and Sandler mugging for the crew. I think I giggled about one and a half times.

The best extra is certainly the screen-specific audio commentary with director Tamra Davis. I've always liked Davis, a filmmaker whose earlier indie efforts such as 'Guncrazy' seemed to suggest an edgier sensibility than she's been able to show in such more generic comedies like 'Billy Madison,' 'Half Baked' and the dreaded Britney Spears vehicle 'Crossroads.' She's relatively engaging here, but I was hoping for more insight into her tastes and approach to filmmaking. Instead, there are some boring dry patches, and lots of the typical props to Sandler and the kid actors. An inoffensive, but ultimately unmemorable, commentary.

(Note that all of the video material listed above is presented in 480i/MPEG-2 only.)

'Billy Madison' is a juvenile comedy in the grand tradition of 'National Lampoon's Animal House,' 'Caddyshack' and 'Christmas Vacation.' Although it is kind of sweet, I didn't find it to be as funny as most of Sandler's other comedies. This HD DVD is about as good as can be expected for a catalog release of this caliber. The video and audio are both fine, and the supplements generic. Sandler fans can probably pick this up with confidence, but otherwise this one's probably best confined to a rental.

Sale Price 2
Buy Now
3rd Party 1.38
In Stock.
See what people are saying about this story or others
See Comments in Forum
Previous Next
Pre-Orders
Tomorrow's latest releases