Overview - A detective (James Spader) tracking a serial killer (Keanu Reeves) gives up all hope of solving the crimes and moves to another city. After he's settled in the old acquaintance he makes himself known. The serial killer has resurrected and resumes sending him pictures of his next victim.
OVERALL
For Fans Only

While slasher movies dominated the horror genre in the '80s, the '90s were all about serial killers. Following the monster success of 'The Silence of the Lambs' in 1992 (which grossed over $100 million at the domestic box office and snagged five Oscars including Best Picture), Hollywood quickly moved on from Freddy, Jason and Leatherface. Hannibal Lecter was now the go-to guy with the knife. Out went naked teenagers in the woods, and in came big-name stars holding flashlights and the kind of shiny, high-gloss production values previously reserved for only A-list Hollywood blockbusters.

Coming far too late in the post-'Lambs' serial killer sweepstakes was 2000's 'The Watcher,' a film that has all the hallmarks of a cash-in made by people with no understanding for the genre they're exploiting. Directed by Joe Charbanic (a music video wunderkind who hasn't been heard from since), with a by-the-numbers script that recycles every cliche from the 'Lambs' playbook, and lifting the dark visual style from David Fincher's trend-setting 'Se7en,' 'The Watcher' doesn't have a single original bone in its empty (but good-looking) head.

The plot: James Spader stars as Joel Campbell, a detective who has been tracking a serial killer David Allen Griffin (Keanu Reeves) for months with no success. Before you can say, "Hey, didn't Morgan Freeman play this exact same character in 'Se7en?'", Campbell moves to a different city in hopes of starting of a new life. But Griffin has other ideas, and slowly begins to insinuate himself into Campbell's new life, taunting him with pictures of a woman who the detective fears may be his next victim -- the pretty Dr. Polly Beilman (Marisa Tomei). Needless to say, it's going to be a cat and mouse game with deadly consequences if Campbell can't finally catch his killer.

'The Watcher' is one of those movies that is so formulaic that you have to wonder what the actors involved were thinking when they accepted the role. Spader has played this straight-laced, overgrown yuppie character a million times before, and adds nothing to the resume here. Tomei's name on the marquee is a particular surprise, especially since she did 'The Watcher' only a few years after winning her Oscar for 'My Cousin Vinny' -- was she really that desperate that she took a role that requires her to do little more than scream and look terrified? But the biggest miscasting is Reeves, who is just not at all scary as a serial killer. Sparing you any Bill & Ted jokes, he just doesn't have the menace or physical stature to turn Griffin into a truly memorable bad guy.

Had 'The Watcher' at least been suspenseful, it might have ranked as a guilty pleasure. But neither the hackneyed script by newcomers David Elliot and Darcy Meyers, nor Charbanic's listless direction bring anything new to the genre. We've seen all of this before -- and better. Heck, there isn't even a twist ending (now all but required in the post-'Sixth Sense' era). Hannibal Lecter would, quite frankly, eat David Allen Griffin for breakfast. 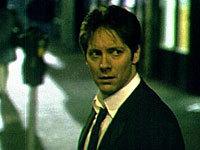 Universal first released 'The Watcher' on standard-def DVD back in 2001, and this HD DVD version appears to be another one of the studio's recent rehashes of an old master -- there doesn't appear to have been much care or concern put into upgrading this one for high-def.

For a six-odd year-old source, 'The Watcher' is admittedly not terrible. Print defects, such as dirt or speckles or excessive grain are not an issue. However, this 1080p/VC-1 encode still looks rather soft, at least by today's standards. There is some slight edginess to the image, the byproduct of an apparent attempt to improve sharpness. Making matters worse, the majority of 'The Watcher' was filmed at night or in exceedingly dark interiors, so shadow delineation is far from superlative. Fine textures are often lost to the murk, while detail is okay, but never anything to write home about.

Colors, meanwhile, have that "Let's rip-off of 'Se7en'" look, with select hues veering towards oversaturation while others look undernourished. Murkiness abounds, as does some slight bleed on the harshest hues. Contrast also has a hot cast common to films of its era, which doesn't help lessen noise or improve depth.

In short, 'The Watcher' isn't a terrible transfer, but it seems pretty clear that Universal had little interest in the film beyond simply churning it out quickly to prime the HD DVD pump.

Like the video, 'The Watcher's audio is fine but nothing more. Universal provides its usual Dolby Digital-Plus 5.1 track (at 1.5mbps), and it does a perfectly decent job of preserving the film's rote sound design.

Typical of '90s serial killer flicks, there is a lot of sturm and drang on the soundtrack, i.e., many "eerie" ambient sounds and loud bursts of shock music stingers. Dynamics hold up just fine, with average low bass and clean high-end. Dialogue is sometimes a bit too soft in the mix for my taste, especially Spader, who I had trouble understanding (granted, the actor mumbles constantly, but whatever). Surrounds are fairly engaged throughout, though discrete effects are usually pronounced in the mix with little sustained ambiance to support them, so I found the soft/loud contrast a bit obnoxious after awhile. Otherwise, there is nothing all that aurally remarkable about 'The Watcher.' 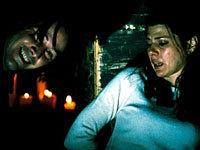 There are absolutely zero supplements on 'The Watcher.' To be fair, the same was the case with the standard-def DVD -- I guess everyone involved with this film was too embarrassed to talk about it afterward?

'The Watcher' is a high-gloss but rote '90s slasher flick. It likely would have been completely forgotten by now if it wasn't for the rather ridiculous casting of Keanu Reeves as a serial killer. It would seem that the only reason Universal has dusted it off for HD DVD is that needs to fill that quota of 100 high-def titles by the end of 2007, but with middling video and audio and no supplements, it's hard to imagine anyone but diehard fans of serial killer movies finding 'The Watcher' even worth a rental.

Sale Price 2.67
Buy Now
3rd Party 2.67
In Stock.
See what people are saying about this story or others
See Comments in Forum
Previous Next
Pre-Orders
Tomorrow's latest releases