Overview - A puppeteer discovers a portal that leads literally into the head of the movie star, John Malkovich.
OVERALL
Recommended

There aren't many screenwriters working in Hollywood today whose work is so distinctive that their association with a project is as much of a draw to audiences as a director or a star. The literary force behind such unusual and inventive films as 'Adaptation' and 'Eternal Sunshine of the Spotless Mind,' Charlie Kaufman is one such writer.

Kaufman's first collaboration with the equally inventive director Spike Jonze, the 1999 film 'Being John Malkovich' introduced both the writer and the director into the mainstream consciousness, and set an unusually surreal tone for an American comedy.

John Cusack stars as Craig Schwartz, an unsuccessful puppeteer stuck in a floundering marriage with his neurotic wife Lotte (played by a nearly unrecognizable Cameron Diaz). Giving up on his puppeteering dream, Schwartz takes a job as a filing clerk at an office complex, where, during his orientation, he meets Maxine (Catherine Keener), a cold-hearted wretch to whom he is instantly attracted. Strangely enough, his orientation also introduces him to the seven-and-a-halfth floor -- a literal half floor in between the seventh and eighth floors of the building.

Left on his own to file papers, Schwartz discovers a seemingly-endless tunnel behind one of the filing cabinets on that half floor. When he crawls inside, he's suddenly pulled forward into actor John Malkovich's consciousness. It is here that the film dives headfirst into the world of surrealist cinema.

Seeing the world through Malkovich's eyes, Schwartz watches as the actor (played by Malkovich himself) goes about his daily routine. While this initial experience lasts only fifteen minutes before Schwartz is dropped from the sky alongside a busy highway, in return visits he will learn to control Malkovich in the much the way he controls his own puppets. Ultimately, he will share the experience with both Lotte and Maxine, who will seize upon the opportunity to get inside the Oscar-winning actor's head in distinctly different ways.

Critics showered 'Being John Malkovich' with praise when it was first released in theaters, and I can't help but agree. As odd as the film tends to be, Kaufman and Jonze are truly remarkable in their ability to craft a familiar world in the middle of this insane reality. Each character in the film is relatable, and their desire for control over Malkovich is both troubling and revealing.

The film's performances are equally impressive. Layered with genius ticks and obscure expressions that completely sell his character, Cusack's quiet portrayal of the unhinged puppeteer is particularly winning, while Diaz, Keener, and Malkovich all turn in award-caliber performances, as well. No matter how detestable any character's actions become, its hard not to find yourself understanding their motivations and feeling genuine empathy for their situation. There aren't any heroes or villains -- just a group of insecure people trying to find their way through a tough life with no answers.

A bizarre dark comedy that explores the complex desires found in the darkest corners of the human mind, 'Being John Malkovich' is jaw-droppingly unique, challenging, and rewarding. Fans of 'Eternal Sunshine of the Spotless Mind' will feel right at home with this one, but everyone should take the opportunity to check out this winning film from the mind of Charlie Kaufman. 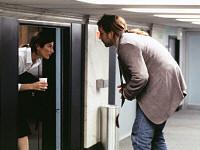 Presented in 1080p using the VC-1 codec, 'Being John Malkovich' looks quite good. While the film's washed out palette and grainy texture could have been stumbling blocks, this transfer handles them in stride. Instances of bold colors are vivid, blacks are deep, and despite a moderate amount of grain, there's a nice depth to the image. I was pleased to see clean textures, natural skintones, and good contrast, and I couldn't find any instances of artifacting, black crush, mosquito noise, or other problems that made the film's initial release on DVD a bit mediocre.

There are, however, a few problem areas. My biggest issue was with fine object detail, which is often inconsistent from shot to shot. While some scenes boast extraordinary detail (such as the one where Cusack flips through a newspaper), others are quite soft. In a direct compare with the standard-def DVD, detailing in these scenes is certainly improved, but still not enough to bring this transfer up to its full potential. To a lesser extent, I was also disappointed to see this print marred by a few flecks and scratches. All in all though, this is still a pretty good transfer and I think fans of the film will be excited to see the inherent upgrade it has received in its move to high-def. 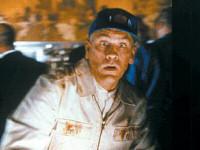 'Being John Malkovich' features a surprisingly strong Dolby Digital-Plus 5.1 surround mix (1.5 Mbps). While the track on the standard DVD tended to sound a bit muffled at times, the mix on this HD DVD boasts crisp dialogue, robust music, and a well-prioritized soundscape.

Even though this is dialogue-heavy flick, the surround channels still get a good workout. Scenes inside Malkovich's consciousness have excellent acoustic density, the portal features a rush of swift channel movement, and the muffled vacuum of the puppeteering scenes are eerie. For perfect example of this mix at its best, head to the scene in which John Malkovich goes through his own portal. The resulting sonic chaos is a testament to the film's sound design and this audio track's prowess.

Likewise, the musical soundtrack is noticeably improved over the standard DVD; treble tones like violin strings are more stable, and bass is more resonant and natural without ever sounding throaty or artificial.

Having said all that, there are some downsides to this Digital-Plus mix. The biggest problem I found was that the dynamics aren't widespread and tend to limit the track's ability to feel alive. Other minor issues include some murky acoustics in Cusack's apartment, some brief but questionable channel accuracy in some of the post-portal scenes, and a few instances where dialogue is lost beneath other effects. Still, overall (and not unlike the video) 'Being John Malkovich' has never sounded better on home video than it does in this HD DVD edition, and fans are sure to be pleased. 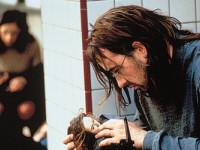 The features on 'Being John Malkovich' are as peculiar as the film itself, and while they're not as comprehensive as I'd like, they do an effective job of enhancing the mood of the overall experience.

First up are a couple of featurettes that cover some unsung heroes of the film's production. "An Intimate Portrait of the Art of Puppeteering" (6 minutes) is a straight forward featurette about the puppeteer who designed the marionette scenes in the film. Likewise, "An Intimate Portrait of the Art of Background Driving" (5 minutes) focuses on a random extra who drives her car in the background of scenes where Cusack is dropped beside the highway.

Next you'll find two sequences that appeared only in partial form in the film itself. "American Arts Culture Presents: John Horatio Malkovich, Dance of Despair and Disillusionment" (4 minutes) is the pseudo-documentary seen on a television in the film that documents John Malkovich's rise to puppeteer stardom. "Seven-and-a-Half Floor Orientation" (3 minutes) is the video Craig watches when he's first hired as a filing clerk.

"An Interview with Spike Jonze" (3 minutes) captures the notoriously interview-phobic director driving his car to work. While it's somewhat amusing, predictably there isn't much useful information conveyed.

Rounding out the package is a feature called "Don't Enter Here, There is Nothing Here" that literally take you to a blank page, a series of four "TV Spots," a "Theatrical Trailer," and "Spike's Photo Album" which collects thirty on-set photographs of the film's cast and crew.

(Note that all of the included supplements are presented in 480i/p and all were ported from the standard-def DVD, first released in 2000.) 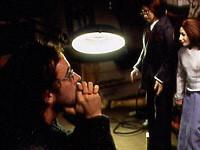 The film that put both Charlie Kaufman and Spike Jonze on the cinematic map, 'Being John Malkovich' is a masterwork of modern surrealist cinema. This HD DVD edition quite strong for a catalogue release, featuring upgraded video and audio, plus a bulletpoint-for-bulletpoint port of all the standard DVD supplements (as pointless as they may be).

Sale Price 2.51
Buy Now
3rd Party 6.49
In Stock.
See what people are saying about this story or others
See Comments in Forum
Previous Next
Pre-Orders
Tomorrow's latest releases