Born on the Fourth of July

Overview - The biography of Ron Kovic. Paralyzed in the Vietnam war, he becomes an anti-war and pro-human rights political activist after feeling betrayed by the country he fought for.
OVERALL
Recommended

"Controversial" seems to be the word of choice when describing Oliver Stone. Not a single article can be written about the prolific director that doesn't mention his reputation -- even his numbingly cautious handling of 'World Trade Center' was met with trepidation by by a press corp convinced that Stone would apply his wiles to his examination of September 11th.

All of which is not to say that his reputation isn't undeserved -- 'Platoon' skewered war support in a time when the military machine gaining momentum, 'JFK' caused renewed suspicion of the government's treatment of truth and history, while 'Natural Born Killers' might as well be a filmmaker's how-to-guide on the best way to anger as many people as possible in two hours. That being said, one of Stone's most controversial films is also his most intimate -- 'Born on the Fourth of July' not only criticized the US government's treatment of Vietnam vets, but it shined a harsh light on the public's nauseating reaction to their ultimate return to civilian life.

Based on the autobiography of the same name, 'Born on the Fourth of July' is the story of Ron Kovic (Tom Cruise), a soldier who was tragically paralyzed during his second tour in Vietnam. The early prt of the film would seem to have a penchant for Apple Pie and Americana as it follows Kovic before he leaves for the war, introduces his loving family. But when Kovic returns home in a wheelchair, things are quite different. His younger brother Tommy (Josh Evans) is an anti-war protestor, his parents (Raymond Barry and Caroline Kava) can't seem to cope with his depression and injury, and his one-time love (a young Kyra Sedgwick) has moved on with her life. After he conquers his own guilt and shame, he joins an organization called the Vietnam Veterans Against the War, where he quickly becomes an influential anti-war activist and works to raise awareness of how veterans are being treated.

The film earned dozens of nominations and took home more than ten substantial awards, including an Academy Award for Best Director. Critics have long hailed 'Born on the Fourth of July' as a masterpiece and a rousing character study of one man's rise from the proverbial ashes.

Even though I've owned several copies of 'Born on the Fourth of July' over the years, I found myself intrigued for entirely different reasons as I sat down to watch it again. As thought-provoking as the film was in 1989, it's perhaps even more resonant in 2007. It's impossible to watch the film without seeing parallels to our nation's current conflict in Iraq. Regardless of your political opinions, Stone's look at our country's shift in wartime support is chillingly relevant and reveals a familiar warning to modern audiences -- those who ignore history are doomed to repeat it. Kovic's story is so tragic because he risked his life for a country that ultimately tried to disown him. Stone, in turn, has made a film that comments on society's need for answers at the cost of its integrity -- with no clear villain to blame, people often turn on each other.

'Born on the Fourth of July' is tough to watch, to say the least -- but it's a rewarding film that will genuinely stir up your emotions. Cruise's performance is shockingly dark -- while his typical playboy charm helps his portrayal of the young Kovic, later in the film he is so authentically disheveled that he exudes a believable sense of desperation and defeat. The supporting cast is wonderful as well -- their silent stares and shifting expressions are a master class in discomfort and unease. Best of all, the script holds its own with heart-wrenching dialogue and naturalistic character development.

In short, 'Born on the Fourth of July' is an exceptional look at a misunderstood aspect of the Vietnam war. Instead of working to heal our wounded soldiers, we chose to disregard them. Oliver Stone's tale of Ron Kovic exists to help ensure we never take our frustration or our protests out on the wrong people. 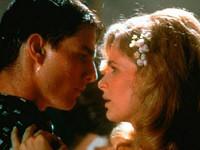 Remastered for a Special Edition DVD release last year, Universal's recent investment in 'Born on the Fourth of July' shines through on this HD DVD version -- I was really pleased to find a great transfer that remains consistently impressive from beginning to end.

Presented in 1080p using the VC-1 codec, 'Born on the Fourth of July' on HD DVD showcases bold colors, deep blacks, and a very nice level of detail for a catalogue title. The picture rarely feels flat and there's a nice depth present in the sunlit shots of the battlefield and in the subdued lighting of Kovic's house. Contrast levels are dead-on, skintones are natural, and textures are well rendered at every turn.

Granted, there are a good number of shots that fall soft, a handful that are boosted with edge enhancement, and two scenes that display poor shadow delineation, but comparing the high-def picture to the most recent DVD edition, these problems would seem to stem from the film's original print and aren't the technical fault of the transfer. Still, had the studio remastered 'Born on the Fourth of July' specifically for this HD DVD release, here's guessing the video quality would've been a bit more improved. That being said, this transfer is a significant improvement over all of the previous DVD releases of the film and 'Born on the Fourth of July' joins a select few high-def catalogue titles that completely justify the cost of the upgrade. 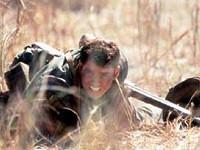 While it was originally thetrically presented in stereo, 'Born on the Fourth of July' was upgraded to a remixed 5.1 surround track for its recent Special Edition DVD. The remaster was impressive on DVD, but it provides an even greater impact on this HD DVD release. Featuring a rich Dolby Digital-Plus 5.1 mix (1.5 Mbps), this track boasts deep bass ranges, stable treble tones, and crisp dialogue that's naturally spread across all of the channels. The score is well-prioritized and the booming war scenes flood the soundfield with chaos and confusion. For the most part, the sound design does a nice job of balancing the quiet with the bombastic -- it rarely falters under the number of elements present in the mix.

Channel movement tends to hop around a bit during battle scenes, but moments of dialogue are presented with swift pans and authentic acoustics. My only real problems are that accuracy is a bit suspect at times, some scenes obviously have a weaker source recording, and ambiance can be a tad stagey. While the scenes in Vietnam are littered with noise, bullet whizzes, and shouts of all volumes and pitches, the American scenes feel unnaturally quiet. Nighttime shots include basic elements like cricket chirps, but there isn't enough there to truly immerse yourself in the soundfield. That being said, especially considering the film's age, this is still a top notch audio presentation -- you won't be disappointed. 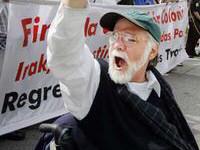 'Born on the Fourth of July' has been released on DVD no fewer than five times over the last decade, but arguably none of the releases have really given the film its due in terms of extras, and this HD DVD continues the trend, porting over the same anemic set of supplements from the most recent 2005 Special Edition DVD.

If you've never heard an Oliver Stone commentary, do yourself a favor and take the time to listen to this one. Regardless of your personal opinion of his political views, Stone is both an engaging and extremely well researched speaker. With this commentary, he covers his experiences with Kovic, his own personal experiences in Vietnam and his return to America, and his view of the entire conflict. Along the way, he finds time to talk about Tom Cruise's passion for the project, the crew's insistence on perfection, and his own attention to detail. Stone never repeats himself and never sems to run out of things to talk about.

The only other feature included is an NBC News-produced "Backstory of Born on the Fourth of July" (19 minutes). Presented in 480i/p, this peice includes interviews with Oliver Stone, Tom Cruise, and Ron Kovic concerning the events and the book that inspired Stone's adaptation. Kovic still seemed haunted by his memories and I found myself rapt with attention every time he was on screen. 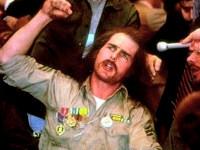 'Born on the Fourth of July' is a tough but rewarding film that tells the tragic tale of a man dismantled by war and his country. Fans of Oliver Stone and this film will be excited to see that it makes its next-gen debut with a strong transfer and a great audio track. The only downside to this release is the limited supplements pckage, although the Stone commentary is worth the price of admission. Even if you already own this one on DVD, the upgrade here definitely justifies the cost of purchasing 'Born on the Fourth of July' again.

Sale Price 1.6
Buy Now
3rd Party 2.45
In Stock.
See what people are saying about this story or others
See Comments in Forum
Previous Next
Pre-Orders
Tomorrow's latest releases