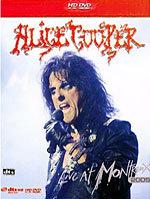 It's funny how what was once so shocking can end up seeming so quaint. Back in 1977, the sight of a creepy long-haired guy in goth face paint, playing godless heavy metal music was absolutely terrifying. Now, it just seems like something you might see at Fright Fest at Six Flags. He may still be "No More Mr. Nice Guy," but by today's standards, Alice Cooper seems downright cuddly.

Having said that, the Freddy Krueger of rock still puts on a great show, even forty years into a seemingly never-ending career. Recorded during a stop on Cooper's most recent tour (billed as yet another "comeback" extravaganza) 'Live in Montreux 2005' showcases the aging but still fit performer in fine form. Many years sober, Cooper really surprises with his vocal agility -- I was expecting the hoarse evil twin of Tom Jones, but instead I was reminded that this guy actually has quite a set of pipes on him. And I have to say that it was great fun to watch him run around the stage like a banshee, growling menacingly into the camera, and belting out not only his typical one-dimensional lite-metal anthems (such as 'Welcome to My Nightmare' and the immortal 'School's Out') but also some rather adept power ballads (particularly the '70s smash "I Never Cry"). And you have to admire Cooper's ability to sing even the most inane lyrics with utter conviction, such as the hilariously titled "Muscle of Love" and "Only Women Bleed."

The show itself is split into two halves. The first is a more straightforward affair, with the usual over-the-top lighting, heavy metal stageset and big hair. The second is a bit more fun, with Cooper dusting off his infamous horror-movie stage show shtick. Watch Alice fry himself in an electric chair! Watch Alice decapitate himself in a guillotine! Watch Alice bite the head off of a bat! Okay, so he doesn't do that last bit. But with the Ozzy Osbournes of the world having long since gone the way of reality TV, Cooper may be the only godfather shock rock has left. God bless him.

Ultimately, there isn't much more to say about 'Live at Montreux -- either you're a fan of such Spinal Tap fabulousness, or you aren't. Personally, while I can't say I was enthralled through the show's entire 90 minute runtime, I was still happy to see the aging rock vampire refusing to go quietly in the night.

Comparing the HD DVD and Blu-ray version of this title, it's in the audio department where things get interesting. The DTS tracks are labeled the same on the back of the boxes for both releases, but output on each reads differently -- the HD DVD appears to be a 1.5mpbs track, while the bitrate meter (using the PlayStation 3) only reads 640kbps for the Blu-ray. Unfortunately, the switch can be somewhat noticeable; a direct compare of three songs showed a bit of a boost for the HD DVD version.

In any case, this is actually quite a well-mixed concert, at least in terms of surround use that is a bit more aggressive than usual. Though the crowd of course fills up the rears, there are some interesting discrete effects during the more theatrical portions of the show. Individual instruments are frequently spread across the fronts, and Cooper's voice sounds clear and distinct even when he's straining the high notes for effecdt. Low bass is powerful, and there is strong clarity and fine detail audible in the higher ranges. Surrounds are typical of most live concert mixes, being primarily reserved for crowd noise.

'Alice Cooper: Live in Montreux' comes to HD DVD and Blu-ray with companion DTS and Dolby Digital 5.1 surround tracks. It's a well-mixed concert, at least in terms of surround use that is a bit more aggressive than usual. Though the crowd of course fills up the rears, there are some interesting discrete effects during the more theatrical portions of the show. Individual instruments are frequently spread across the fronts, and Cooper's voice sounds clear and distinct even when he's straining the high notes for effect. Low bass is powerful, and there is strong clarity and fine detail audible in the higher ranges. Surrounds are typical of most live concert mixes, being primarily reserved for crowd noise.

Neither the HD DVD nor the Blu-ray release of 'Live at Montreux 2005' have any extras. But then, neither did the standard-def DVD release.

Alice Cooper, don't go changin' to try and please us. We love you just the way you are -- rock's answer to Dracula, Frankenstein and the Wolfman all rolled into one. Though his spectacle may not have quite the same bite it had back in the '70s, it's still a hoot to watch. This HD DVD release is strong in both the video and audio departments, though don't expect any extras. But fans probably won't mind -- 'Live at Montreux' is still a great document of Alice at his scariest.

Sale Price 6
Buy Now
3rd Party 6
In Stock.
See what people are saying about this story or others
See Comments in Forum
Previous Next
Pre-Orders
Tomorrow's latest releases