Overview - Movie based on the television series finds Jim Phelps and his team charged with stopping a traitor from stealing and selling classified material. Everything was going well until the man they are following and all of the team are inexplicably killed except for Ethan Hunt. Ethan then calls the Director and goes to meet him when he discovers that the whole mission was to ferret a mole that they have been suspicious of for some time. The Director shows evidence that hints that Ethan's the one they have been looking for but Ethan knows that he is not, so he escapes. Ethan then arranges to meet the buyer and whom he warns against using the material he has and when they meet he offers to get what he paid for in exchange for telling whom the mole is. Ethan, along with Phelps' wife Claire recruits two disavowed agents to help him which won't be easy.
OVERALL
Give it a Rent

When critics point to the moment that Tom Cruise transformed from serious actor into serious Hollywood ego trip (or just seriously crazy, depending on your point of view), they tend to point to one his biggest hits. Which film they choose seems to depend on the critic. Was it his breakout success with 'Risky Business' that turned him into such a guarded control freak? The mammoth 'Top Gun'? Or that Oscar nom for 'Rain Man'?

For my money, the moment that Cruise really went from being just your average A-list star making $10 million a picture to a true Hollywood player was actually 'Mission: Impossible.' The first film that bore Cruise's name as both a producer and as an actor, its eventual blockbuster success ensured that he would never be a mere gun-for-hire again. Whether that's a good thing or a bad thing, well, only history will be the judge. But watching 'Mission: Impossible' again today, just on its own terms, I can't say that Cruise's maiden voyage was a particularly auspicious start.

Intended to be a big-budget update of the classic television show, things certainly looked good on paper. Cruise the producer tapped Brian De Palma ('Carrie,' 'Scarface,' 'The Untouchables') to launch the property, ensuring that -- if nothing else -- the movie would look great. Unfortunately, no one seemed to pay as much attention to the script. Indeed, the screenplay by David Koepp ('Jurassic Park,' 'Stir of Echoes') is a mess, and seems to discard all of low-tech charms that made the original show such a cult favorite. Plotty, emotionally inert and far too convoluted for its own good, I've seen the flick about four times now and I still can't figure out what the heck is going on for most of it. Though I will give De Palma props for not simply replicating the flat look of the TV show on the big screen, ultimately the film doesn't amount to anything meaningful. It's flashy, but empty.

I won't spoil the plot (not that I could explain it anyway) other than to say that the biggest problem with casting Cruise is that 'Mission: Impossible' had to reimagined as the Ethan Hunt show. The team dynamics of the original series are all but jettisoned, to such an extent that you wonder why Hunt even needs anyone to help him if he's his own one-man James Bond. All we get is a star vehicle for the toothy actor, and aside from perhaps Ving Rhames as his right-hand man Luther Stickell, none of Hunt's support team is given an opportunity to shine. Emilio Estevez is wasted in what looks like a "I'm cashing a paycheck because I really want to direct" cameo, while Emmanuelle Beart is a beautiful but utterly forgettable love interest. And how did Kristin Scott Thomas and Jean Reno get roped into doing dull, forgettable roles that anybody could have played?

I'm also not convinced De Palma has ever been a great action director. Sure, he always comes up aces when concocting really crazy, complicated sequences powered by wildly-intricate camera moves, but his languid pacing is still more suited to dramas and thrillers (the latter of which remain his raison de entre). Even the climax on a speeding bullet train is hampered by flat pacing, illogical physics and dated CGI. Had the plot been more coherent, and the thriller aspects brought to the fore, De Palma might have made for a more compatible choice. Instead, 'Mission: Impossible' feels like a dull TV movie blown up to big-screen proportions.

Ultimately though, my biggest disappointment with first 'Mission: Impossible' comes back to Cruise. It's easy to see the appeal of the project for a star of his magnitude -- he gets to play his own version of Bond and launch a new franchise in the process. But despite its entertaining aspects, Ethan Hunt's first big-screen adventure lacks any emotional pull, or much consequence for its characters. For me, it's by far the weakest of the trilogy. You can just skip right ahead to John Woo's 'M:i-2,' which at least delivers top-notch action or, better yet, J.J. Abrams' underrated 'M:i III,' which as of this writing looks to be the last we're going to see of Cruise as Hunt. As it stands, 'Mission: Impossible' is a rarity for a franchise -- a case where the movies really did get better as they went along. 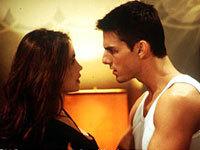 All three 'Mission: Impossible' flicks originally hit HD DVD (and Blu-ray) late last year, as part of Paramount's 'Ultimate Missions' box set. It included the entire trilogy in one collection, although the most recent of the three installments was also made available separately as a stand-alone release. Now, with sales of the box set finally cooling, Paramount is ready to issue the first two flicks on their own, for those fans not interested in owning the whole set. However, don't expect any surprises -- Paramount has simply repackaged the same disc for 'Mission: Impossible,' so all the tech specs and supplements remain the same.

As with the box set, 'Mission: Impossible' is presented here on HD DVD in 2.35:1 widescreen and 1080p/VC-1 video. My reaction to the transfer is the same as my impressions last fall -- the quality of the presentations increases noticeably with the roman numeral. The first 'Mission' is the weakest of the bunch, though to Paramount's credit, they have released the flick on video many times over the past ten years and this is certainly the best one yet. Despite a bit of dirt here and there, the source material is in nice shape with no major wear and tear. Still, transfer is rather dark and soft. Black crush is a bit steep, which hampers shadow delineation. Colors are also oversaturated and fleshtones can look funny, skewing quite noticeably towards the red end of the scale. Detail is somewhat above-average for a film a decade old, but not spectacular. On the bright side, the transfer still packs a good amount of depth, and brighter daylight scenes in particular really excel. I was also impressed with the smoothness and clarity of the image, and I noticed no compression artifacts or macroblocking, even during fast action.

'Mission: Impossible' gets the Dolby Digital-Plus 5.1 surround (1.5mbps) treatment on HD DVD, which gives it a slight boost over the Blu-ray, which in typical Paramount fashion gets Dolby audio downgraded to 640kbps. Granted, that's not a huge benefit, though, as the film's sound design just doesn't dazzle.

To be fair, it can sound quite good. Dynamic range is predictably terrific for a big-budget action spectacle, with impeccable sound reproduction (impressive are all the constructed sounds for the various gadgets and the like) and strong clarity to the dialogue -- which, alas, didn't help my comprehension of the plot. However, surround use is sporadic. The action scenes are the most alive, with some nice whoosh-pans in the rears and solid imaging. Unfortunately, sustained atmosphere is lacking, with even scenes in crowded restaurants and the like failing to create that bustling, realistic ambiance I hoped for. The film's score by Danny Elfman, however, comes through loud and clear, as does the forceful opening montage featuring U2's modern updating of the series' classic theme song.

As with the video and audio, the supplements for 'Mission: Impossible' are also identical to the box set version released last year. The package will also be familiar to those who picked up Paramount's 10th Anniversary Edition on standard-def DVD earlier in 2006, as all of the materials were originally culled from that release.

As director Brian De Palma has never been a fan of audio commentaries and never records them for any of his films on DVD, there is no such track on the disc. Instead, we get about an hour's worth of making-of material to pick up the slack. Four featurettes offer an overview of the production aspects of the film, and feature new or recent interviews with De Palma, Tom Cruise, Ving Rhames, Jon Voight and other members of the cast and crew, as well as actual CIA operatives to lend the proceedings an air of authenticity. "Mission: Explosive Exploits," "Mission: Agent Dossiers," "Mission: Spies Among Us" and "Mission: Catching the Train" are somewhat overfilled with talking heads as there's not a boatload of behind-the-scenes footage available, though "Catching the Train" is a highlight. I have never been quite as blown away by the sequence as some others, but it is definitely the film's effects highlight, and this is a good deconstruction of what is a very complex scene.

The disc's other two featurettes are somewhat more interesting. Though I wanted more out of "Mission: Remarkable: 40 Years of Creating the Impossible," it at least offers a solid introduction to the original series and its transition to the big screen. Of course, I could have done with less of the shameless promo for the film versions, and instead more focus on the television series. Meanwhile, "Mission: International Spy Museum" reveals the existence of the top-secret museum depicted in the film. Turns out the fiction of spy gadgets is really reality -- would you believe a piece of poop that functions as a short-wave radio receiver? Neither would I.

Rounding out the extras is a collection of promotional material. There is a Theatrical Teaser and full Trailer for 'Mission: Impossible' (which are the only extras on the whole set presented in full 1080p video), plus a Photo Gallery with production and publicity stills. Finally, we have two montages that are total fluff -- "2005 Stanley Kubrick Britannia Award for Excellence in Film" runs four minutes and features scenes from Cruise's best-known movies, while "Generation: Cruise" is another few minutes of icon worship.

'Mission: Impossible' is probably too plotty for its own good, although obviously it was successful enough to launch a multi-million dollar franchise. Spy movie fans will probably enjoy the abundance of convoluted twists and turns, though I prefer the second and especially third entries in the series. This stand-alone HD DVD version offers nothing new over the version of the film previously included in the HD DVD 'M:I' box set Paramount released late last year, but the video, audio and supplements are pretty solid. If you have no interest in either of the two sequels, pick up 'Mission: Impossible' without hesitation. Otherwise, stick to a rental just to see the one that started it all.

Sale Price 8
Buy Now
3rd Party 8
In Stock.
See what people are saying about this story or others
See Comments in Forum
Previous Next
Pre-Orders
Tomorrow's latest releases