Overview - The Coen brothers' irreverent cult hit comes to DVD as a Collector's Edition, with all-new bonus material. The hilariously twisted comedy-thriller stars Jeff Bridges, John Goodman, Steve Buscemi and Julianne Moore. Join the "Dude" and his bowling buddies on their journey that blends unforgettable characters, kidnapping, a case of mistaken identity and White Russians. Enter the visually unique and entertaining world from the creative minds of the Coen brothers and remember: the Dude abides.
OVERALL
Recommended

Writing/directing/producing partners Joel and Ethan Coen (The Coen Brothers) have earned a strong and loyal fan base over the last two decades thanks to films like 'Raising Arizona,' 'Miller's Crossing,' 'Fargo,' and 'O Brother, Where Art Thou.' But arguably their biggest cult phenomenon is 'The Big Lebowski,' an off-beat comedy that's been hailed as one of the greatest comedies of all time.

Jeff Bridges plays Jeffrey Lebowski ("The Dude"), a stoned slacker who spends the majority of his time at the local bowling alley, where he hangs out with a gun-toting bipolar powerhouse named Walter (John Goodman), a thick-headed stooge named Donny (Steve Buscemi), and a strange sexual-deviant named Jesus (John Turturro). One night, The Dude comes home to find a pair of thugs who have mistaken him for an elderly millionaire with the same name. They threaten his life, demand he pay a debt he supposedly owes, and urinate on his rug.

After consulting his bowling league friends, The Dude decides to ask the wealthier Lebowski to settle the debt and replace his rug. The resulting chaos drops The Dude and his cohorts in the middle of a kidnapping plot that introduces them to a slew of new peculiar characters, including the asexual Maude (Julianne Moore), the millionaire's assistant (Philip Seymour Hoffman), and a group of self-proclaimed Nihilists. Befuddled at every turn, The Dude bumbles his way through an unforgettable plot that never stops to take a breath.

With a top notch screenplay and a series of pitch-perfect performances, I've always found 'The Big Lebowski' an absolute joy to watch. Goodman is a riot of rage, Turturro hams it up in one of his best roles ever, and Bridges plays Lebowski with an aloof air of humility that makes him an enduring pseudo-hero. The cast's chemistry seems to come naturally and makes each exchange of rapid-fire dialogue a genuine treat.

With such a complex script, the Coen Brothers must balance an onslaught of characters and subplots -- yet, to their great credit, the resulting film feels effortless and relaxed. While The Dude and Walter are strange when we first meet them, they quickly seem to become the most normal characters in the film. The comedy is dry, the punchlines are revolutionary, and each development in the plot is out of left field.

Having said all that, the tone of 'The Big Lebowski' definitely isn't for everyone -- you have to like this particular style of comedy to benefit from the setup and payoff of each scene. There aren't any jokes or slapstick per se, but instead a rather carefully constructed series of increasingly-absurd events that push each character to the extreme.

In the end, 'The Big Lebowski' is a film that everyone should at least try -- its rabid fanbase should be proof enough that there's something unique and special to be found here. As a longtime fan of the film, I personally never pass up an opportunity to watch it again, and revisiting it once more on HD DVD certainly didn't disappoint. 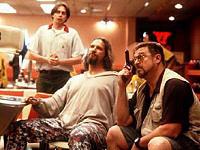 Presented in 1080p utilizing the VC-1 codec, 'The Big Lebowski' hits HD DVD with some noticeable upgrades compared to the most recent the 2005 remastered Collector's Edition DVD. The most apparent improvement is the colors, which are bold and stable, bolstering the casual palette of the film without feeling artificial. Just watch any scene in the bowling alley and pay particular attention to the sheen of the bowling balls, the warmth of the lanes, and the inkiness of the background shadows. This increases the illusion of depth considerably and I was really impressed with how healthy the picture looked. Fine object detail is very good -- I could read the small print on book covers, see the stitching in Lebowski's rug, and all of the individual hairs in John Goodman's beard.

There are a few technical issues, but nothing overly distracting. I caught some slight edge enhancement, a few shots that displayed minor crushing in the dark sky, and (as is the case with most catalogue titles) some scenes that were softer than the rest of the film. The picture also randomly had a slight waver in the contrast, although this problem was infrequent and minimal.

The biggest downside here is the fact that 'The Big Lebowski' just isn't the sort of film that really shines on high-def. It would be easy to glance at this transfer and shrug your shoulders -- the cinematography is intentionally ordinary and, unless you were to pick one of just a few scenes with visual oomph (like the dream sequence), it wouldn't convince anyone to make the switch. However, in a side-by-side comparison with the DVD, this HD DVD is clearly the way to go -- fans will be ecstatic to see how good the film looks. 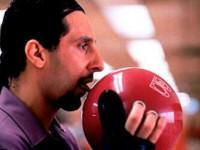 'The Big Lebowski' is a largely dialogue-centric film, so there really aren't many sonic fireworks to be enjoyed here. That said, like the video, the Dolby Digital-Plus 5.1 surround mix (1.5 Mbps) on this HD DVD edition is a clear improvement over previous DVD editions.

In a direct compare with the Collector's Edition standard-def DVD release (which was quite solid in its own right), the dialogue on this HD DVD is more crisp, channel movement is smoother, and the dynamics are pushed further to each extreme. Again, the film isn't loud or boisterous on most occasions, but simply hop to a scene set in the bowling alley, and the bowling balls swish across the channels, crowd chatter creates a nice atmosphere in the rear speakers, while the overall sound design enhances the presence of the effects with the subwoofer.

I did have a few issues, however. There are a few instances where treble tones inexplicably flatten out, leaving voices hollow and acoustics empty. There are also prioritization problems in scenes with shouting -- the arguments between The Dude and Walter could use a bit of tweaking (while still retaining their chaotic tone).

All things considered, this mix does a good job handling what little it's given, but bottom line there just isn't enough here to make this a truly memorable HD track. 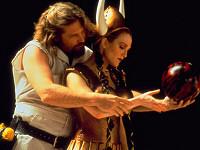 While this HD DVD ports over all of the extras from the 2005 Collector's Edition DVD, unfortunately that's not saying much, as that release was woefully lacking in substantive features. A commentary, a full documentary, or even a featurette on the cultural response to the film would have increased the value of this package exponentially.

The first thing you'll find is a "Special Introduction" (3 minutes) by a fictitious film preservationalist named Mortimer Young. I won't ruin the setup for anyone who hasn't seen it, but it's a cute tongue-in-cheek extra that should give you a laugh.

"The Making of The Big Lebowski" (24 minutes) is a production featurette that notably includes interviews with the often reclusive Coen Brothers, but unfortunately this one is surprisingly ordinary and doesn't really offer much in the way of interesting information or entertaining anecdotes. The camerawork appears to have been done by someone who was suffering from seizures and I found the entire featurette to be a dry waste of time.

Finally, we get "Photographs by Jeff Bridges" (3 minutes) set to music from the film. Aside from an annoying song, this montage is a nice treat -- Bridges clearly has an eye for composition, and his images are quirky and off-beat.

(Note that all of the above-listed video supplements are simple ports presented in 480i/p only.) 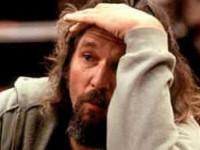 Count me among the many passionate fans of 'The Big Lebowski.' Showcasing a complex series of eccentric characters, it seems no matter how many times I see this film it just gets better. Happily, this HD DVD release from Universal delivers on the bottom line with an above average audio mix and a great video transfer that's been noticeably enhanced by the move to high-def. Unfortunately, a a lackluster series of repeat features drags down the overall score a bit, but still this is a no-brainer for those who already love the flick and a great rental for those who haven't yet experienced the bizarre world of 'The Big Lebowski.'

Sale Price 6.98
Buy Now
3rd Party 3
In Stock.
See what people are saying about this story or others
See Comments in Forum
Previous Next
Pre-Orders
Tomorrow's latest releases