Overview - Long ago, when majestic fire-breathers soared through the skies, there lived a knight who would come face-to-face and heart-to-heart with the most remarkable creature that ever existed. Dennis Quaid stars with the voice of Sean Connery in this heroic adventure that blazes with fantasy, humor, and the most amazing special effects since Jurassic Park! This epic adventure will move and thrill the entire family.
OVERALL
Worth a Look

CG animation has come a long way over the years thanks to the revolutionary work of special effects studios like Industrial Light & Magic. By the mid '90s, ILM had created a convincing water-based alien in 'The Abyss,' an inhuman killing machine in 'Terminator 2: Judgment Day,' and herds of jaw dropping dinosaurs in 'Jurassic Park.' But it was the 1996 fantasy film 'Dragonheart' that built on all of their previous efforts to develop Draco -- a convincing CG dragon based on the vocal delivery and facial performance of Sean Connery.

The story follows a dragon slayer named Bowen (Dennis Quaid), a bad-tempered warrior determined to exterminate every dragon from the face of the Earth. But when he encounters the last dragon in existence -- the proud Draco (Connery) -- he teams up with the reluctant beast to swindle money from gullible villages. The two form a begrudging friendship that's interrupted by the tyranny of King Einon (David Thewlis). With the help of a wandering minstrel (Pete Postlethwaite), a beautiful peasant named Kara (Dina Meyer), and the oppressed villagers of Einon's kingdom, Bowen and Draco must find a way to defeat the king and restore honor to the land.

When I first saw 'Dragonheart' in 1996, I left the theater shaking my head. I was hoping to find a fantasy epic, but instead found a family adventure-comedy. I hadn't seen the film since, but years later, I'm now a family man myself (as evidenced by the three-year-old terrorizing my house), and as such I thought I might be in a better mindset to handle what the film actually is. Sadly, I discovered a whole slew of other problems. To my eyes, 'Dragonheart' is a hammy and plodding film that has more in common with a silent-era slapstick comedy than it does a modern sci-fi fantasy. Further watering things down are the wacky relationship mechanics of '80s buddy-cop flicks. But don't get me wrong, it's not the comedy that bothers me -- it's that the film seems to be constantly grasping for its identity, never knowing when to push for drama or pause for laughs.

The resulting emotional see-saw tried my patience at every turn as I found myself completely disenchanted with the fantasy of this fictional world. Director Rob Cohen ('The Fast and the Furious,' 'XXX' seems caught in the limitations of a childhood story. His version of sentimentality is sappy, his villains are clichéd, and his tension is laughable. King Einon should be a threatening force whose presence is felt at all times -- instead, Cohen has him sneer and rant when he needs the audience to feel intimidated. On top of this, the extent of Cohen's thematic depth is to dress the heroic Bowen in black armor and the evil Thewlis in white -- a not-so-subtle trick that's been exploited time and time again in much better films than this.

On the upside, all of the actors seem to be having a good time and Quaid and Connery have an exciting chemistry. While Quaid speaks with an insufferable growl, his portrayal of Bowen is certainly endearing. And to his credit, Connery doesn't just dial in a vocal performance -- instead he injects Draco with a surprising amount of bravado and humility. I just wish the two had a better director and a stronger script.

At least 'Dragonheart' enthralled my son -- as a family film, it delivers the fun and the adventure that kids should love. And wrapped in the warm glow of notalgia, others who saw the film when they were younger will likely be more forgiving than me. Alas, this one just isn't my style. I couldn't wait for the credits to roll so I could move on to something with more directorial polish. 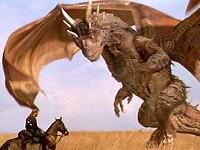 Picture quality-wise, 'Dragonheart' on HD DVD is a mixed bag. Presented in 1080p with the VC-1 codec, this release features bold colors, vibrant fire effects, and deep black levels that add dimension to the picture. Fine object detail is generally sharp and only a handful of shots are soft or murky. Edges are frequently crisp and foreground objects really pop. Textures receive the most noticeable bump -- armor, clothing, and Draco's hide greatly benefit from the upgrade to high definition.

There aren't any issues with macroblocking or crush, and grain levels stay light and consistent. The source holds up pretty well, but it still suffers from flecks, blemishes, and contrast wavering that were evident in previous DVD editions. There are a couple instances of color banding (look at the moon in the night sky), fleshtones occasionally drift pink, and a few shots fall quite flat (the long shot of the fortress near the end of the film looks awful).

To top it all off, the film's CG doesn't always stand up to increased scrutiny that comes with high-def -- Draco looks good during the day, but he looks a bit like a cartoon in many nighttime shots. He's distractingly disjointed from the live-action elements and the film really begins to show its age. In short, while fans of the film may be happy with the visual resurrection, this HD DVD transfer just doesn't stand up to the best catalogue titles available in high defintion.

While the video may be lacking at times, the audio is much better at showcasing the ways an older film can shine in a high-def release. 'Dragonheart' features a Dolby Digital-Plus 5.1 surround track (1.5 Mbps) that works every channel to a stirring effect. Sword clangs are stable and varied, thunderous wing flaps are naturalistic and resonant, and Draco's roar rumbles out of the subwoofer. I was particuarly impressed with the dynamics on display -- treble tones are pitch perfect and bass tones are powerful and boomy. Channel pans are eerily realistic (listen when Draco swoops past the camera), accuracy is dead on, and the sound design doesn't suffer from over-the-top effects work. Acoustics seem to be considered most of the time and good prioritization ensures dialogue isn't lost in the shuffle.

The only small misstep in the audio quality can be attributed to the film's age. Every now and then, dialogue sounds weak in a scene and feels hollow in comparison to the rest of the film. This is definitely not the norm, however, and the audio on this HD DVD is generally quite stellar. 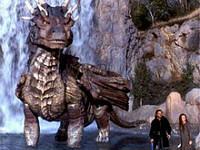 Dragonheart has been released several times on standard-def DVD, both as a barebones edition, and as a Collectors Edition. Fans will be pleased to see that all of the video-based extras from the Collector's Edition have found their way to this HD DVD. (Note that all of the video supplements are presented in 480i/p, and look expectedly muddy in comparison to the feature film.)

"The Making of Dragonheart" (45 minutes) is a typical behind-the-scenes documentary that covers every aspect of the film from the shooting to the effects work. I found this documentary somewhat weighed down by the film's score, lots of shots from the final film, and a reliance on dry interviews with cast and crew. While the leads are engaging, they tend to hype the film instead of discussing it on its merits. The entire documentary ends up feeling very promotional and doesn't explore the finer points of the film's creation. Things liven up a bit when the camera turns to ILM as they develop and create Draco, but still it's all very familiar. It is amusing to see the filmmakers' excitement with the advances in CG at the time -- we take for granted that what may be the norm in special effects today were cutting edge a decade ago.

The only other significant feature is a "Feature Commentary with Director Rob Cohen." I wouldn't recommend this track to anyone other than hardcore fans, although interestingly, he does talk a bit about the historical accuracies and context he laced within the film. I hadn't noticed these elements at all before and my respect for the film was boosted ever so slightly. Still, his anecdotes are boring and sometimes repetitive -- he doesn't have a lot to say and only has a limited ability to describe the personalities and motivations of his actors. He tends to narrate the on-screen action and this track grows tiresome very fast.

Finally, you'll find a "Teaser Trailer," a "Theatrical Trailer," and two random "Outtakes" that aren't very funny. All in all, it's a suitable supplemental package, but it's not likely to inspire much excitement among fans.

'Dragonheart' plays well for young kids, but it did little for the adults in my house. As an HD DVD release, this is a generally nice looking catalog title, although it just doesn't have the consistent polish of high-def releases with better transfers. On the bright side, this one does boast a wonderful audio track, and fans should be pleased to see that it ports over all of the video-based extras from the previous standard-def Collectors Edition.

Sale Price 2.65
Buy Now
3rd Party 2.65
In Stock.
See what people are saying about this story or others
See Comments in Forum
Previous Next
Pre-Orders
Tomorrow's latest releases