Overview - Michael J. Fox stars as Frank Bannister, a small-town "ghostbuster" in league with the very spirits he's supposed to be exorcising. The scam works well until a powerful spirit goes on a murderous rampage, forcing Frank to find a way to stop the diabolical ghoul in this special-effects-packed supernatural chiller that's so fiendishly entertaining, it's frightening!
OVERALL
Recommended

Before 'The Lord of the Rings' trilogy made him a household name, Peter Jackson honed his chops making small but notably ambitious dramas and horror films that stretched the limitations of their individual genres. In 1996, Jackson released 'The Frighteners,' a horror-comedy starring Michael J. Fox that bombed at the box office, but ultimately found a cult-following on home video.

The film tells the story of Frank Banister (Fox), an architect who develops psychic abilities after his young wife is killed in a car accident. Devastated by his loss, Banister becomes a con-man who claims to flush ghosts out of people's homes -- the catch is, he actually can see (and communicate with) spirits. In fact, three spirits (John Astin, Chi McBride, and Jim Fyfe) live in his house and help him stage all the hauntings around town. After one particular "house cleansing" at a local psychologist's home (Trini Alvarado), her husband (Peter Dobson) winds up dead at the hands of a menacing grim reaper on a killing spree. Frank takes it upon himself to protect Lucy, discover the secret of this demon, and avoid being shouldered with the blame by a feisty FBI agent (played with hilarious abandon by cult icon Jeffrey Combs).

Critical reaction to the film at the time of its release was mainly positive, although some audiences (including the MPAA's ratings board) had difficulty adjusting to the subgenre of horror-comedy, which was at the time was still just emerging in mainstream cinema. Jackson himself has said that he originally designed the film for broad audiences and fought hard for a PG-13 rating, but after numerous failed attempts to recut the film to the MPAA's satisfaction, he begrudgingly embraced the R-rating (and all that it implies) by reshooting a few scenes and upping the film's gore quotient.

Personally, I'm a big fan of 'The Frighteners.' Yes, the morbid laughs take some getting used to, but Jackson rarely loses momentum in his storytelling, and his ability to cast a film remains unparalleled -- once again with 'The Frighteners,' he finds a pitch-perfect player for every role. But while all of the supporting cast handle their roles with aplumb, it's Michael J. Fox and Jeffrey Combs that really sell the believability of this universe.

Admittedly, some of the CG work in this HD DVD edition of 'The Frighteners' is starting to show its age, but the designs are still so creative and fresh that such technical deficiencies are easy to forgive. In fact, if there's any problem with 'The Frighteners' on HD DVD, it's that the Director's Cut presented on this disc isn't quite as tight as the original theatrical release (which was 14 minutes shorter). Specifically, there are a few plot holes (acknowledged by Jackson) that are made more obvious, and a few inconsistencies that become more recognizable upon multiple viewings. Still, none of these issues took much away from my overall experience with the film.

In short, 'The Frighteners' is a great little flick that many fans of Peter Jackson's later work may have missed when it first came around. The performances are excellent, the comedy is fun, and the chills are creepy. Some may still feel the film has identity issues, but if you enjoyed 'Evil Dead,' 'Shaun of the Dead,' or (oddly enough) 'Kung Fu Hustle,' you'd be well advised to give this maniacally macabre film a try. 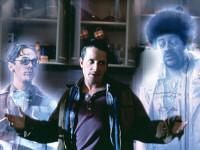 Presented in 1080p using the VC-1 codec, 'The Frighteners' is a slightly-above average presentation of a clearly aged master. Colors are nice but occasionally subdued -- the print wavers at times and the transfer doesn't feel as stable as some of its more pristine high-def brethren. Contrast is good, black levels are deep, and texture detail holds up well. It certainly looks better than its standard DVD counterpart, but it fails in demonstrating the full potential of high definition.

Unfortunately, fine object detail is suspect and some shots are much softer than others. Compare a scene like the museum attack to sunlit moments in the graveyard and you'll see a huge difference. The film's palette already tends to flatten the image, but this occasional lack of clarity strips the transfer of even more depth and dimension. It's also painfully obvious that the film hasn't been remastered in quite a while. The print is plagued by spiking grain levels, white and black flecks, and small scratches.

I wish Universal had seen fit to remaster this one, rather than simply encoding it with a higher bitrate and resolution. With a proper pass, I think this film could really look stunning. Similarly, you have to wonder if the inclusion of nearly five hours of supplemental video didn't rob the feature film video on this disc of much-needed bits that might have improved its presention. 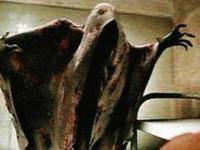 A step above the video is the audio. Featuring a Dolby Digital-Plus 5.1 surround track (1.5 Mbps), 'The Frighteners' on HD DVD is a marked improvement over the film's 2005 standard-def DVD release. Bass tones rumble, treble blares punch through the soundscape, and the entire soundfield feels more solid. Channel movement is dead on and pans subtly swish across the soundscape (just listen anytime the grim reaper is darting from perch to perch). Accuracy is also noteworthy and even the elements of an eruption of breaking glass and gunshots are pinpointed to the appropriate speaker.

However, the consistent issue I had with this sound package was during moments of chaos, where the sound design occasionally falters due to poor prioritization -- voices can be lost in the shuffle, shouts too closely overlap crashing effects, and shotgun blasts come at the same pitch regardless of a room's acoustics. While it may seem like a nit-pick, my wife (who constantly makes fun of my inability to just sit and enjoy a sound track) noticed the same thing. It's not distracting per se, but it is a detail that keeps this sound package from being all that it could be. 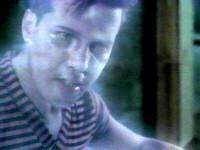 This HD DVD edition of the 'The Frighteners' includes two supplements originally produced for the much-sought-after 1998 special edition Laserdisc, both of which were later ported over to the 2005 special edition DVD.

Most impressive is the four and a half hour "Making of The Frighteners" (270 minutes), a monster documentary that covers every imaginable aspect of the film's creation. From pre-production work, to casting, to filming, and to its eventual release, literally everything about this film is covered in obsessive detail. This feature is packed with cast and crew interviews, candid behind-the-scenes footage, and enough information to put this documentary on par with 'The Lord of the Rings' supplemental material. The best bits cover entire creatures cut out of the film (the gatekeeper to the cemetery), the special effects, and the CG trickery used to enhance practical effects. Fox and Combs are a joy to watch on set, and you really get the sense that everyone in the production had a wonderful time with Jackson's vision.

The only downside to this fun romp through the filmmaking experience is that it's presented in standard definition and doesn't share the sheen of the feature transfer on this HD DVD. The documentary itself appears to be terribly compressed, occasionally looking as if it's been reconstructed with Legos. I only wish that Universal had put this one on a second disc, both for its own sake, and to give the audio and video of the feature film a bit more room to breathe.

Rounding out the behind-the-scenes package is a Feature Commentary with director Peter Jackson. Since it appears on the same disc as four and a half hour documentary, you might think the commentary would be horribly repetitive, but Jackson generally sticks to new topics, making a noticeable effort to add new information to the mix. He points out all of the additional scenes added into the director's cut, describes working with individual actors, and talks at length about his experience with the MPAA and the studio system. For students of Peter Jackson history, it's worth noting that this was his first recorded commentary -- as such, he doesn't seem quite as confident as he does on 'The Lord of the Rings' commentaries, but he's still fascinating to listen to and never fails to entertain.

You'll also find a short "Special Introduction to the Film" by Peter Jackson, originally recorded for the 1998 DVD edition, but it's a typical intro with the director hoping you enjoy the film more than anything else. 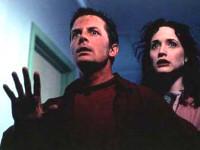 Peter Jackson didn't just appear on the scene with 'The Lord of the Rings' - he's been around turning in quality work for years and 'The Frighteners' is a testament to that fact. The only downside to this HD DVD release of the film is that while the transfer is a clear improvement over the most recent standard DVD, it lacks the polish of other HD DVDs. Still, fans of the film should find plenty to love in this otherwise impressive package, which includes the director's cut of the film, a great audio package, the full four and half hour documentary of its creation, and a director's commentary with Peter Jackson.

Sale Price 5.95
Buy Now
3rd Party 5.95
In Stock.
See what people are saying about this story or others
See Comments in Forum
Previous Next
Pre-Orders
Tomorrow's latest releases