Overview - Bob Harris (Bill Murray) and Charlotte (Scarlett Johansson) are two Americans in Tokyo. Bob is a movie star in town to shoot a whiskey commercial, while Charlotte is a young woman tagging along with her workaholic photographer husband (Giovanni Ribisi). Unable to sleep, Bob and Charlotte cross paths one night in the luxury hotel bar. This chance meeting soon becomes a surprising friendship. Charlotte and Bob venture through Tokyo, having often hilarious encounters with its citizens, and ultimately discover a new belief in life's possibilities.
OVERALL
Worth a Look

After being mauled by critics for her performance in 'Godfather Part III,' you would think Sophia Coppola would've run as far away from Hollywood as she possibly could. Instead, she pushed through this early misstep to become one of the most intriguing female writer/directors in modern film. Following the critical success of her 1999 film 'The Virgin Suicides,' she again turned her pen to another examination of loneliness and loss, this time focusing specifically on humanity's inability to function without companionship. The resulting film was 'Lost in Translation,' her most acclaimed film yet, earning Coppola worldwide critical praise and an impressive four Academy Award nominations.

Filmed on a shoestring budget on location in Japan, 'Lost in Translation' tells the story of an aging American action star named Bob Harris (Bill Murray), who has come to Tokyo to film a Japanese-language television commercial. Wrestling with his inner demons, he drifts through Tokyo in a haze -- a visitor to a strange land with no clue what happened to his former glory days. By chance, he meets a young American woman named Charlotte (Scarlett Johansson) who has joined her photographer husband (Giovanni Ribisi) on a business trip to Japan, but find herself spending most of the trip alone in the Hotel. She's half Bob's age, but the two instantly click, igniting a friendship that temporarily satisfies the overwhelming loneliness each of them feel.

'Lost in Translation' succeeds because it never settles into the rut of a romantic structure. Bob and Charlotte aren't meant to be lovers -- in fact, it's arguably the last thing they're actually searching for. Instead, it becomes clear that each is simply seeking companionship and friendship -- they both feel lost and out of touch with love and life. Tokyo is simply the problematic social situation that serves to push them into each other's company. Every time I watch the film I feel like I understand their individual pain because it embodies the lack of connection everyone feels at some point in their life.

Murray and Johansson expertly pack Bob and Charlotte full of inner-turmoil, with each turning in truly heart-wrenching performances. Even when Murray is at his most amusing, the sadness behind his eyes reveals his character's depression. The much-beloved actor has slowly been shifting his career from joke-laden comedies to quirky dramedys that don't pull any punches. His expressions give way to a million thoughts that dialogue could never convey, generating true empathy from his audience. Johansson is less impressive, but still adds weight and impulse to a young woman confused by her conflicting feelings.

The cinematography is brilliant. There were times where 'Lost in Translation' made me like an intruder into real people's lives, which is a testament to the efficiency of the imagery and camerawork in the film.

Written and directed by Sophia Coppola with great care and subtlety, 'Lost in Translation' isn't a film I can watch very often, as it tears my heart in two on each viewing. Its pacing in particular may turn off some audiences, as it can be terribly slow-going, but the pay off is an excellent character study that says more about loneliness and our growing disconnect as a society than any film I've ever seen. I'm happy to have this one on my shelf and I would recommend it to any fan of independent film, heavier comedies, or lighter dramas. 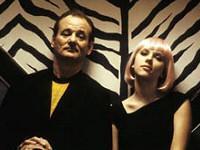 Presented in 1080p using the VC-1 codec, this HD DVD video transfer for 'Lost in Translation' is disappointingly inconsistent. For every crisp and vivid shot of the neon-lit Tokyo, there's a soft interior scene that lacks depth and detail. For examples of the latter, just take a look at the famous shot (featured on the poster) of Bill Murray sitting on his bed, the scenes with Johansson listening to Ribisi snore in the middle of the night, or Murray and Johansson's dinner at the sushi bar in downtown Japan. Object edges aren't crisp, the skin of the actors is almost textureless, and the image is flattened by the lack of definition in the picture.

Luckily, all is not lost. The heavy grain and noise that plagued the standard DVD is gone, and the print is nearly pristine. There is still a veil of grain (more visible in well-lit shots) but it doesn't distract like it did on the DVD. Black levels are deep, some of the street shots of Tokyo are gorgeous, boasting bright colors that pop against the night sky. Scenes like the subway ride feature nice contrast, great fine object detail, and a sharpness that's missing from the picture in many of the other interiors. When the transfer shines, the film looks better than ever -- but other times, it only offers a basic improvement over the standard DVD. It pains me to say this because I was really excited to get my hands on this release, but the transfer here is only slightly above average. 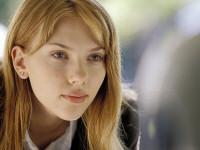 Featuring an English Dolby Digital-Plus 5.1 surround track (1.5 Mbps), 'Lost in Translation' has a suitable audio package that handles what little it has to work with as well as can be expected. Truth be told, there really isn't much to evaluate this one on, as this is a (suitably) quiet mix for a quiet film.

The music is the most impressive element, utilizing every channel and really developing a lyrical ambiance over the course of the film. Dialogue is clear, the streets are bustling with detailed effects, and the sound designers certainly paid close attention to room acoustics when building the mix. Channel movement is subtle, accuracy is dead on, and ambiance is always present, no matter how intimate the setting.

With all of that being said, there are some problems. First, the dialogue may be clear, but it occasionally wavers in crispness. Some lines have clearly been rerecorded and others should have been. Every now and then, a series of lines sound as if they have been recorded on a sound stage -- they're more hollow than other dialogue in the film. Second, dynamics are hardly a factor and the sound design never seems to take full advantage of the streets of Tokyo. The streets have a lot of noise, but it never comes and goes in volume-altering waves as you'd expect in real life. Given these nitpicks and the overall limited nature of the sound presention, 'Lost in Translation' is probably be one of the last HD DVDs that audiophiles would turn to when looking to showcase their equipment. 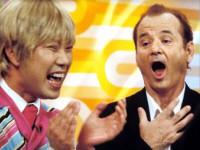 'Lost in Translation' comes to HD DVD with a complete selection of the supplemental features available on other DVD editions of the film. While a commentary with Murray or Coppola would go a long way, the material collected here still qualifies as a semi-decent package.

First up is "Lost on Location" (29 minutes), a featurette that details the behind-the-scenes work put into the film. The video is entirely captured on a shaky, handheld camera and there isn't a talking-head interview to be found. The result is a collection of candid footage and on-the-spot interviews with cast and crew as they make their way through the bilingual challenges of shooting in Tokyo. This peice covers the crew from their first arrival in Japan, the actors in each location, and Coppola doing her best to stay away from the camera. Bill Murray is the highlight here -- he's funny, quick on his feet, and seems to be having a great time making new friends that can barely understand anything he's saying.

"A Conversation with Bill Murray and Sophia Coppola" (10 minutes) is a more serious look at the themes of the film. While Coppola looks as if she would rather be anywhere but in front of a camera, Murray steps up as an engaging host. His comments are insightful and this clip gave me even more to consider when watching the film.

A series of five Deleted Scenes (11 minutes) is mostly a wash. They're more extensions than they are deletions and they tend to meander instead of adding much character depth. One scene features a four-minute press conference with the inane American actress played by Anna Faris (I kid you not), but the scene really worth watching is the last of the bunch -- an extension of Bill Murray's conversation with an older Japanese man with a cane. I couldn't stop smiling as they continuously chatted without any clue as to what the other was saying. Priceless.

Rounding out the supplemental package are "Matthew's Best Hit TV" (4 minutes), an uncut version of Bill Murray's appearance on the Japanese television show; a music video for "Kevin Shield's City Girl" (3 minutes) which is completely set to finished film footage; and last but not least, the film's theatrical trailer.

(Note that all of the supplements included here are presented in 480i video only.)

While I'm a big fan of the film 'Lost in Translation,' I'd caution high-def fans to take a look at this HD DVD before buying it. The video and audio both have their finer points (and are definitely an improvement over the standard-def DVD), but neither pack the full-bodied punch of the best high-def releases.

Sale Price 8.9
Buy Now
3rd Party 8.9
In Stock.
See what people are saying about this story or others
See Comments in Forum
Previous Next
Pre-Orders
Tomorrow's latest releases