A View from Space with Heavenly Music

Overview - Eight hours of music all on one disc, HD DVD or Standard Definition . . . the greatest classical music ever recorded, in Dolby Digital 5.1 Surround Sound, provides the heavenly soundtrack to this spectacular view of our planet captured in stunning High Definition clarity by the international crew of the space shuttle Endeavour. The Earth, as never seen before, accompanied by the timeless music of Vivaldi, Bach, Beethoven, Mozart, Tchaikovsky, Brahms, Mendelssohn, Pachelbel, Strauss, Grieg, Bizet, Debussy, Rossini and more. Over eight hours of music on one DVD.
OVERALL
Skip It

I was genuinely eager to watch this disc. When I was a kid, the sheer limitlessness of the stars was a playground for my imagination -- the blackness housed mysteries my tiny brain could only begin to wrap itself around. As I anticipated watching 'A View From Space with Heavenly Music,' I pictured variations of the scene from Stanley Kubrick's '2001: A Space Odyssey' -- the framed dance of spinning space stations inside a symphonic whirlwind of stringed melody. Unfortunately, this wasn't the case. NASA buffs and classical music fans alike will be appalled to find countless missed opportunities, poor production quality, and inexcusable repetition on this release.

The actual visual presentation of 'A View From Space' is a short, 55 minute video that you can watch with any one of eight musical tracks. Beginning with a striking launch, the impact of the images fade to the background as long shot after long shot of our planet's surface loop in ten minute reels for the last forty minutes of the video. Aside from the initial launch, the images are nearly all static, and more often than not, the landscapes are so broad that it's difficult to discern what country, continent, or ocean is being filmed. That simplest contextual reference -- even if it appeared within screen captions -- would've made 'A View From Space' much more appealing. Adding insult to injury, there's only about twenty minutes of material that's actually been shot with HD launch cameras and handheld HD astronaut cams.

With such a lackluster visual component, you might conclude that the producers of this high-def cash-in are more concerned with the accompanying musical presentation. Sadly, outside of their technical presentation, the soundtracks are as disappointing as the visual experience. The first track features Wagner, Pachelbel, Ravel, and Strauss -- a strange combination of stylistically unrelated composers that inject a disjointed confusion into the images. Next up is a mix of Beethoven's greatest hits, one of the few tracks that manages to be engaging from beginning to end. Unfortunately, as with the majority of the musical tracks, the selections are comprised of easily recognizable songs and provide little that you haven't heard in dozens of commercials. Tchaikovsky, Handel, Debussy, Marcello, and Sutie follow up with a third track -- the best of the multiple composer tracks -- opening with Tchaikovsky's powerful "1812 Overture" and quickly evolving into a flight-of-fancy sampling of choral arrangements. A Mozart track is a barebones assortment of the artist's more accessible work and has the most trouble matching the tone of the visuals. Next up is a Bach track that blares to life with bizarre organ blasts which make a speedy retreat in favor of softer, tiresome fare. After that comes a track featuring Rossini, Dvorak, Brahms, and Chopin -- another questionable combination of composers that seem clumped together for no good reason. Finally, there's one more single-composer track featuring music from Tchaikovsky -- this one turned out to be my favorite of the bunch. By far the most fitting, it combines equal parts whimsy, strength, and grace, injecting the images with a rhythm that helped slightly reduce the feeling of repetition.

Make no mistake -- my low grade for the movie has nothing to do with my opinion of classical music. As a fan of the genre, all of the individual arrangements here are auditory treats. Unfortunately, this disc's fundamental failing is that the music and images rarely work well together, which is the whole purpose of a release like this. The soundtracks themselves, meanwhile, often feel tacked together without much thought to how the combined compositions function as a whole. Basically, the entire package is akin to a bargain bin set of CDs that cover the most famous work of classical powerhouses. Worst of all, there is no notation of composer or title for any given song. Again, a simple subtitle would've solved this issue and informed those unfamiliar with classical compositions what and who they were listening to. 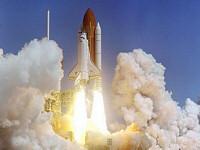 Utilizing the MPEG-2 codec, the HD DVD version of 'A View From Space' is a highly compressed mess, plagued by constant source noise that's most noticeable atop the bright blue skies and images of the planet. It's exactly the sort of bandwidth-challenged image you'd expect to see on a pixilated high-def broadcast channel and it doesn't even come close to other non-feature releases on HD DVD.

The blemishes come in all shapes and sizes that might serve as a handbook for the various issues that can plague a high-def transfer, including mosquito noise, shimmer, compression artifacting, faint macroblocking on wide shots of the ocean, edge halos around high contrast variances, and occasionally severe color bleeding. To top it all off, black crush problems (a compression of low end blacks and grays that results in black blobs) haunt starless space shots, while the camera lens and shuttle window are covered in grime, splotches, and dust specks (unavoidable without digital manipulation, which is thankfully acknowledged at the end of the video, but distracting nonetheless). Luckily, most people use this sort of release as background filler at social events so these complaints will go largely unnoticed by casual viewers.

Note: upon this disc's release in mid-2006, Concert Hot Spot was apparently overwhelmed with complaints about the HD DVD video quality. When the disc was later released on Blu-ray, the distributor responded to the complaints by excising three minutes of footage that are particularly ugly and pixelated, and have no buisness on any format, high-def or standard DVD. Those three minutes remain on this HD DVD edition, though we hesitate to call it a "bonus" over the Blu-ray. 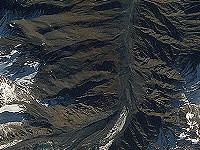 The technically solid sound package is the one bright spot in the otherwise overwhelming muck of this release. Brought to lush life with a Digital-Plus 5.1 surround field, this 640 kbps bitrate mix reminded me of the symphonic concerts my wife and I attended from time to time when we were in college. It certainly doesn't create the illusion of a grand hall, but the soundscape is eerily reminiscent of a minor venue with nearby walls that catch and bound the tones about the room. When closing my eyes, the soundfield was was convincing, with the brass, strings, and percussion all coming from the appropriate directions.

Echoes and resonance are handled with ease and the soundfield uses each channel to its advantage. The recordings balance deep and light tones perfectly, register at a high quality, and display top-tier source fidelity. However, that being said, the audio tracks do occasionally soften when the soundfield is filled with every piece of the orchestra. It doesn't become muffled, per se, but it does exhibit a decrease in overall clarity that muddles the proceedings ever so slightly. On top of this, some of the recordings have varying volume levels that hamper the overall illusion of the soundscape -- it occasionally feels like moving between separate concert halls to listen to a performance with fairly different environmental acoustics.

Needlesstosay, the large downside to this release (considering the discs other failings) is that a well produced audio CD can give me the same experience with tracks of my choosing. So while the technical quality of the Dolby mix is a nice addition to this release, it doesn't justify the purchase of 'A View From Space' in any way. 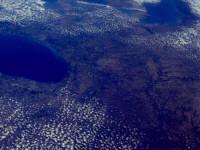 A technically impressive audio package can't save this release from boring and repetitive visuals, a lack of supplements, and a shockingly inferior HD image that's overrun with source noise and other major issues. This HD DVD release is three minutes longer than its Blu-ray counterpart (which was released several months later), but that's a hardly a bonus, as these moments were removed due to their substandard video quality. If you're still convinced that 'A View From Space' is for you, you've been warned. Otherwise, concentrate your efforts on finding better material to showcase your high definition home theater in more creative and stable ways.