Overview - An escaped maniac returns to his childhood home on Christmas Eve, which is now a sorority house, and begins to murder the sorority sisters one by one.
OVERALL
Bad Flick, Good Disc

Horror fans, it's finally happened -- with the the 2006 remake of 'Black Christmas,' Hollywood's "reimagining" craze has hit rock bottom.

It all started back in 2003, when the grisly remake of 'Texas Chainsaw Massacre' scored box office gold. Since then, all of the major studios have raided their vaults for every last barely-identifiable '70s horror property to exploit with new, "hardcore" splat-aesthetics and a gleeful reveling in graphic sadism and mean-spiritedness. The result has been that most of the recent horror remakes ('House of Wax,' 'The Hills Have Eyes,' and the upcoming 'Halloween') have much more in common with the new 'Texas Chainsaw' and torture chambers like 'Hostel' than they do with films that supposedly inspired them.

The original 1974 'Black Christmas' is certainly not the most well-known of its slasher brethren, but it may just be the classiest. As directed by Bob Clark, this low-budget little sleeper of a Canadian horror flick was elegantly staged, immensely atmospheric and relatively restrained in its use of on-screen violence. It also managed to wring plenty of icy suspense out of a now-stock situation (sorority girls terrorized by an unseen assailant on a famous holiday). Though it did little business in the United States upon its initial theatrical release, over the years the film has slowly earned respect on home video from a growing number of fans, turning it into a legitimate cult classic.

As a result, I suppose it was inevitable that 'Black Christmas' would be remade. But while the original film managed to scare audiences silly with its slow mounting suspense and Hitchcockian camera angles, its reimagining once again goes for the jugular with copious amounts of off-putting gore effects, and goes on to further insult our intelligence with script that's utterly incoherent. It really amazes me that the fimmakers behind projects like these can be so completely clueless about what makes even a decent horror flick work. With 'Black Christmas,' director and screenwriter Glen Morgan ('Final Destination,' 'Willard') makes the same fatal mistake made by most of the new wave of remakes, giving the once-mysterious killer an "origin" story that takes away all of the creepiness that made the original so terrifying. Add to that a series of characters so unlikable that we wish for their imminent deaths the moment they appear onscreen, and this film is easily the nadir of new millennium horror.

I could go on and on about what's so offensive to the original about the new 'Black Christmas' -- the garish high-key lighting, the casting of pretty but utterly interchangeable actresses that are nearly impossible to tell apart, the unending succession of "jump scares," the genre cliches that were tired two decades ago -- but it's like shooting fish in a barrel. Instead, I'm just grateful that 'Black Christmas' bombed in theaters, because maybe it means Hollywood will finally give up and stop raping the classics of my youth. A vulgar, cynical, exploitative cash-in and nothing more, 'Black Christmas' is the ultimate peice of coal in the Christmas stockings of horror fans. It's time for all of us to just say no to gift-wrapped Hollywood remakes like this one. 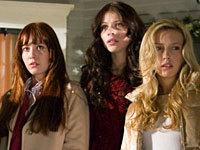 'Black Christmas' is a truly awful film, but making it even more painful is the fact that the lighting is completely wrong for a horror film. Overly lit, with bright colors more akin to 'A Christmas Story 2' than a slasher movie, I suppose 'Black Christmas' is "eye-popping" if for all the wrong reasons. That said, on a purely technical level, this 1080p/AVC MPEG-4 transfer delivers quite well.

Befitting a new release, the print is in pristine shape with nary a blemish or spot to be found. Blacks are excellent, and contrast has a nice bright edge without blooming. Colors are, as mentioned above, quite garish. The interiors of the sorority house are bathed in bulbous red and green holiday lights, which look vivid and mostly stable. Unfortunately, fleshtones suffer from a bit of oversaturation, and sometimes there is too much of a pink tint to faces. Shadow delineation can also suffer from a slight black crush, lessening detail. Overall sharpness is solid, though the image is a hair softer than the average new release. Still (personal aesthetics aside), overall this is quite a solid transfer.

The Weinstein Co./Genius continues their support of full-blown Dolby TrueHD (48kHz/24-bit) tracks with 'Black Christmas,' although for some reason they also continue to not label such tracks on the back of the HD DVD box. In any case, this is a perfectly fine soundtrack for a film with perfectly fine sound design.

While I personally found the film's campy use of silly, rinky-dink "Christmas music" rather annoying, it's one of the few sonic elements that are consistently placed around the soundfield. Otherwise, discrete effects are reserved primarily for the shock moments, and the extended chase climax, which is actually quite enveloping. The subwoofer also delivers pretty strongly, with some decent low bass frequencies. Dialogue generally sounds fine as well, although occasionally I found the various female characters' voices hard to hear above the din. 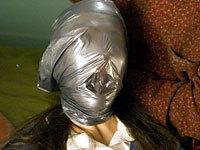 'Black Christmas' serves up a pretty straightforward spate of extras, although this is a rare instance where the bonus features are far superior to the actual feature -- the two-part documentary in particular is quite excellent, even if it makes for a pretty depressing viewing experience. (Note that all of the video material is presented in 1080i/MPEG-2, and looks very good.)

"What Have You Done? The Making of 'Black Christmas'" (27 minutes) and "A Filmmaker's Journey" (26 minutes) are both culled from the same extensive collection of on-set video diary footage. "What Have You Done?" focuses solely on the production, and is a very thorough and enjoyable tour of what will turn out to be disaster. It's too bad, really -- all of the actors are much more likable on-set than they are on-screen, and clearly no one expected to make a crap movie. Even better is "A Filmmaker's Journey," where director Glen Morgan is very candid -- perhaps to a fault. He freely admits 'Black Christmas' is not a film he himself would ever pay to see -- he sas he doesn't like gore or slasher films, and he "fucking hates" jump scares. Yet, in a concession to the commercial failure of his previous film 'Willard,' he dispiritedly succumbs to delivering a paint-by-numbers horror film in hopes of salvaging his career. As presented in this doc, Morgan cuts a sadly charming figure -- a startling example of the kind of well-meaning filmmaker who's gobbled up and spit out by the Hollywood machine with alarming regularity. "A Filmmaker's Journey" should be mandatory viewing at film schools across the world because, if nothing else, it is a dire cautionary tale of how easily you can lose your soul to the devil of commercial moviemaking.

There is no theatrical trailer for 'Black Christmas' included, nor any spots for other Weinstein films.

I hated 'Black Christmas' with a passion. It's a pointless, unpleasant waste of celluloid -- the original deserved a far better remake than this cynical exploitation. Unfortunately, the relatively high quality of this HD DVD release is not enough to make me recommend this disc, not even the very nice video and audio, nor the insightful supplements. If you're a horror film, don't open 'Black Christmas' -- simply mark "Return to Sender."

Sale Price 49.89
Buy Now
3rd Party 49.89
In Stock.
See what people are saying about this story or others
See Comments in Forum
Previous Next
Pre-Orders
Tomorrow's latest releases