Overview - Patrons locked inside of a bar are forced to fight monsters.
OVERALL
Worth a Look

In a strange twist of fate, the often-derided "Project Greenlight" television series ultimately became just what it set out to be -- but not until after the series was cancelled. For those not in the know, "Project Greenlight" was an annual contest/reality series that selected a writer and a director, funded their film, and then documented the trials and tribulations of low-budget filmmaking -- all the while with the goal of helping to market the enventual theatrical release of said film.

After two interesting seasons resulted in two mediocre films, "Project Greenlight" hit its stride when it decided to forego more accessible material and focus on genre flicks. For its third (and final) season, scare legend Wes Craven joined executive producers Ben Affleck, Matt Damon, and Chris Moore in selecting a pulpy horror movie called 'Feast,' which was written by a couple of thirty-year-old preteen boys (Marcus Dunstan and Patrick Melton) and helmed by a recluse (director John Gulager). Watching the team deal with the slew of problems documented by the series during the shooting of the film, I fully expected the worst from the end product. However, much to my surprise, 'Feast' is an above average romp that tackles genre clichés and has a blast in the process.

The plot is thin to say the least. Patrons of a bar are under siege by a band of vicious creatures who won't give up until everyone is dead. That's it. There are no revealing plot developments, hardly any character depth, and nothing to discover in future viewings. Instead, a clever series of satirical beats address the horror films in general, equally criticizing and reveling in the genre's disconnect with reality. Invincible heroes appear briefly so they can die, characters that should outlive the rest are killed quickly, and the survivors are the unlikeliest of the bunch. Each character is only as three-dimensional as the short and hilarious descriptions that appear with their name when they first show up on screen. 'Feast' should simply be a series of cheap deaths with extreme gore that fails to entertain on a deeper level -- instead, it's somehow something more.

Anyone who watched this season of "Project Greenlight" knows that casting was a huge area of contention between the director and the powers that be. Gulager wanted to cast mainly friends and family, while the studio wanted professional actors. Interestingly, watching the film everyone seems to hit the right note with their characters, but the people Gulager fought to use are the most effective and feel the most authentic. Gulager's father, in particular, is one of the smartest presences in the film and brings a quaint gruffness to his bartender character. Still, the performances from everyone involved are great and hit all the right notes. Balthazar Getty is an atypical typical-hero, Henry Rollins is a talky no-action motivational coach, Judah Friedlander is an amusingly deteriorating Beer Guy, and Jason Mewes shows up in an excellent cameo as himself. While every part is insanely over-the-top, each actor grabs ahold of their character and pushes so hard that the performances help raise the high level of satire of the film itself.

To be fair, only pure genre fans are likely to completely enjoy the schlock of 'Feast' as Gulager intended. It's brilliant as a comedic analysis of the inner-workings of the horror universe, but comes up short as a feature film that might appeal to a larger audience. As much fun as I had with the film, I knew I was essentially watching surface level junk that the writers never intended to be as intelligently layered as Gulager made it to be. "Project Greenlight" fans will also recognize how much the director changed the path of 'Feast' to create something more original. As annoying as he was on camera, Gulager actually delivers something he should be proud of. Despite facing a myriad of problems, he produced something witty, clever, and oddly unique.

I only wonder if my pure enjoyment of the film comes as a result of having watched this season of "Project Greenlight." If I hadn't seen how terrible the film should have been, perhaps I might not have been as impressed with the end result. Taking this into account, if you're not a fan of the series (or the horror genre in general), you might tread carefully before picking this one up. 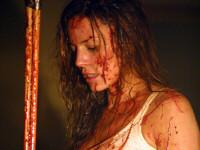 Presented in 1080p using the AVC MPEG-4 codec, 'Feast' looks quite striking in high definition. The biggest upgrade over the standard-def DVD is the total lack of compression artifacts and source noise, a distracting problem that plagued the film's initial release. I was happy to find solid blacks, healthy colors, and no banding whatsoever. For a horror film, 'Feast' is soaked in warm oranges and crisp greens that really give the vibrant picture depth. Contrast is also very impressive and the picture never feels murky or muddled by its shadowy palette. Fine object detail is well-rendered as evidenced by the tiny lettering on the signs in the bar and on the labels of the bottles of liquor. Skintones feel a bit boosted, but go along with the heat-drenched colors of the film. The texture detail on the actors' faces, hair, and stubble was a treat as well, especially for such a low budget affair.

There are a few small problems. Shadow delineation is intentionally low, black levels occasionally hover in darker gray ranges, and there are a few print spots that flash across the screen every so often. Pickup shots look a tad disjointed from the rest of the filming, but I may have only noticed this because of watching "Project Greenlight" and knowing exactly where these differences were.

Overall, this transfer is a nice upgrade over the DVD edition and fans will be extremely happy to see this (relatively) low budget film looking so good. 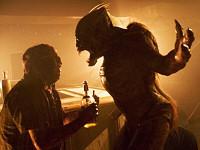 'Feast' is presented in a boisterous Dolby TrueHD track, as well as a Dolby Digital-Plus mix. The TrueHD package brings a noticeably stronger presence to the rear channels, a heftier resonance to the subwoofer, and a crisper range of treble tones to the front. The sound design is as exaggerated as the film, but it really makes use of subtle channel movement and pinpoint accuracy. Wet sounds drip from all directions, splintered wood fragments from each speaker, and screams naturally echo around the soundscape with great realism. I was impressed by the quick creaks of stairs, the soft shuffle of footsteps in the dirt, and the noise of the floorboards under shifting weight. The dynamic range of this mix is wonderful and the active soundfield had my head turning at several points.

I do have a few minor quibbles. Dialogue is muffled on rare occasions, but generally well prioritized within the rest of the soundscape. Impacts and explosions flood the speakers to the point that loud moments are sometimes a bit too loud. There were a few instances of volume prioritization issues such as shotgun blasts occurring at the same level as blows from a swinging object. Finally, the soundtrack tends to pound the soundscape at times, causing the mix to seem frantic and crowded. While it certainly adds to the tone, the filmmakers could have retained the musical chaos while integrating the score with the sound design more effectively. 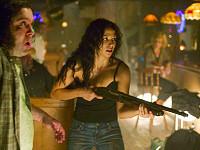 All of the main features from the standard DVD have been ported to this HD DVD edition of 'Feast,' but alas each of the video-based supplements also retain their lower quality standard-def presentation.

First up is an audio commentary with director John Gulager, producers Joel Soisson and Michael Leahy, writers Marcus Dunstan and Patrick Melton, and effects artist Garry Tunnicliffe. Compared to his presence on "Project Greenlight," Gulager is incredibly forthcoming on this commentary track and I really enjoyed the moments where he spoke. For the most part, it's a crowded discussion that skips over a lot of interesting behind-the-scenes anecdotes that were present on the show. While this lack of repetition is appreciated by me, it would only be repetitive for fans of the series. I have a feeling there are some chunks of information that will leave new visitors to 'Feast' confused. The worst part of the track is the two writers -- their banal comments continued to convince me that they had no business winning the writing portion of the "Project Greenlight" contest. That being said, everyone on the track has a good time, gets along, and even gave me a few laughs.

Next up are a series of Deleted Scenes and Outtakes. The scenes Gulager removed wouldn't have helped or hurt the film, and they only total about eight minutes of time. Most of them seem to have been left out because of visual goofs that presented technical problems in the editing process. The bloopers felt generic to me -- more amusing moments were present throughout the last season of "Project Greenlight."

Lastly, a duo of featurettes cover the filming of 'Feast.' The first -- "Horror Under the Spotlight" (11 minutes) -- is a promotional video that tosses a few interviews together and pretends to be a "Making Of" documentary. Its inclusion baffles me because the season of "Project Greenlight" is a "Making Of" documentary. The absence of the show seems like a gigantic missed opportunity, particuarly as the resulting film is more entertaining after having watched the series. The desire for a quick buck on two releases prevents 'Feast' from becoming a five-star extravaganza that would be a no-brainer purchase whether someone enjoyed the film or not. Luckily, the second featurette -- "The Blood and Guts of Gary Tunnicliffe" (10 minutes) -- is much better, examining the process behind the effects work and creature design on the film. It was fun, engaging, and worth the time to watch Tunnicliffe pull miracles out of his hat for practically no money whatsoever.

I'm a horror genre junkie through and through, and 'Feast' turned out to be a satirical tribute that genuinely impressed me. A great video transfer and an equally hearty audio package make this HD DVD a no-brainer for fans of the film. The only disappointments on this release are in its slim supplements package, which fails to take advantage of the wealth of content from the "Project Greenlight" season that documented the creation of 'Feast.' This one's not for all audiences, but if you're a horror fan, or if you watched the third season of "Project Greenlight," it's definitely worth a look.

Sale Price 10.57
List Price 12.97
Buy Now
3rd Party 10.57
In Stock.
See what people are saying about this story or others
See Comments in Forum
Previous Next
Pre-Orders
Tomorrow's latest releases