Overview - A tough-minded drama about two friends in South Central Los Angeles and the violence that comes between them.
OVERALL
Give it a Rent

There's a fine line between a filmmaker weaving a shared narrative thread through all of their work, and simply regurgitating the same basic story to diminishing returns. David Ayer's 'Harsh Times' unfortunately seems to fall in the latter category. Though the low-budget indie marked Ayer's directorial debut, it bears a striking thematic resemblence to a film he wrote earlier -- the Oscar-winning box office hit, 'Training Day.'

Indeed, comparing the two films, while the plot details may seem vastly different at first blush, the basic character dynamics are nearly identical, as is the moral trajectory the story will ultimately take.

Christian Bale gets the Denzel Washington role as Jim Luther Davis, an ex-Army Ranger hoping to join the LAPD, while Freddy Rodriguez is his best friend Miguel 'Mike' Alonzo, the Ethan Hawke character, whose career aspirations are a bit less focused. As the film opens, the two are buddies who spend their days hanging around the pool hall, planning to marry their longtime girlfriends (played by Tammy Trull and Eva Longoria). But when their career paths veer in two wildly different directions, their friendship will be severely tested.

Like 'Training Day,' 'Harsh Times,' inverts many of the usual cliches of the buddy-cop genre by blurring the distinctions between hero and anti-hero. Such ambiguity is certainly welcome, but Ayer sticks too close to the same themes of blind loyalty and misplaced allegiances that fueled 'Training Day.' He even repeats many of the narrative motifs and visual devices -- Jim and Mike will spend many a scene in a car, with extended monologues that explain the plot rather than illustrate it with action. We've seen all of this before, but grander and flashier.

Also problematic is Bale. He certainly gets the far showier, scene-stealing role over Rodriguez -- and he's definitely fun to watch -- but he overplays it. His constant eye-rolling and the manic scowl permanently etched upon his face make him seem like the Dark Knight on speed, with a serious death wish. Playing off a performance so lost in the abyss of caricature, Rodriguez is left stuck in a completely reactive role. He may be the film's moral center, but he never once propels the action forward. Instead, he's like a spectator to his own spiritual rebirth, and as much as we want to root for him, it's hard to feel much empathy for a character who allows himself to be so inexplicably passive.

Ultimately, 'Harsh Times' attempts to stage a tragic morality tale, but manages very little. By the time of the inevitable stand-off between Jim and Mike at the film's climax, 'Harsh Times' never manages to explode with the much-needed intensity it needs. The film is to be commended for being more ambitious than its critically lauded, far more commercial cousin in 'Training Day,' but that also makes it a bigger disappointment. Hopefully, for his next effort, Ayer will leave behind morally-conflicted cops and explore fresher, more challenging territory. 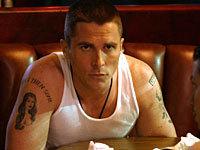 'Harsh Times' looks predictably harsh -- this is a highly stylized, visually gimmicky picture, with a transfer to match. As such, this 1.85:1 widescreen 1080p/AVC MPEG-4 presentation is a solid representation of the film's gritty intent -- edgy, oversaturated and at times distracting in its artifice. Granted, it's fairly effective, but it's also far from top-notch demo material.

The source is in typically great shape for a recent release. Blacks are deep and inky, although fall-off is a bit deep in the shadows, making it immediately clear that 'Harsh Times' lacks the depth of the best high-def presentations. Colors are often violently overpumped, especially during Christian Bale's psychotic flashes which feature very intense reds and yellows even for a next-gen transfer. This does nicely contrast, though, with the more sedate domestic scenes, which are relatively natural. Detail isn't the greatest, however, with the image often looking quite soft. On the plus side, despite a bit of noise in some scenes (thanks to the very high-key lighting), major compression artifacts are not a problem.

In the audio department, 'Harsh Times' is fairly good, although I expected the sound design to be a bit more aggressive, at least in the action scenes -- even with a full-blown Dolby True HD 5.1 surround (48kHz/24-bit) this one never really breaks out.

The soundfield fails to fully envelope, with the illusion of a full 360-degrees of sound rarely achieved. Action moments do boast better rear presence, with some zippy discrete effects and the score better bled to the surrounds. Low bass also has a strong, tight quality and the high-end is spacious. Quieter moments are largely just stereo, however, and there is little in the way of active atmosphere. Dialogue reproduction is a very impressive, however, with not a word lost in the din. If nothing else, 'Harsh Times' proves that more than just bitrate, a truly effective high-def mix requires a foundation of great sound design to really soar. 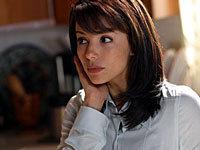 Somewhat out of character for a Weinstein Co./Genius HD DVD release, 'Harsh Times' is rather light on the extras. Of course, so was the standard-def DVD, so I suppose this shouldn't come as much of a surprise.

The main attraction is the screen-specific audio commentary with director David Ayer. Unfortunately, this one's a bit of a slog, with Ayer offering a bit too much plot recap, with his deeper insights mostly limited to his own experiences living in South Central and how they informed the grittiness of his picture. He offers precious little on the film's larger themes, and genuinely interesting production anecdotes are also few and far between.

The other major video supplement is a collection of seven Deleted Scenes, totally nearly 13 minutes. Only one scene, "Jim's Drug War Speech," offers much excitement, with a nice, predictably over-the-top extended monologue for Christian Bale.

Rounding out the slim line-up is a Theatrical Trailer for 'Harsh Times,' plus five English and four Spanish full-frame TV Spots. All of the video-based extras are presented in 480i/MPEG-2 video only.

'Harsh Times' is as tough and gritty as its title suggests. It is also just a bit too reminiscent of director David Ayer's own screenplay 'Training Day,' only without the Oscar-winning scene chewing by Denzel Washington. Christian Bale, in just about the same role, gives it a good go, however, and he may be the sole reason to see 'Harsh Times.' This is a solid enough HD DVD effort from the Weinstein Co., with a nicely stylized transfer and soundtrack. Still, this one amounts to a decent rental and not much more.

Sale Price 29.98
Buy Now
3rd Party 29.99
In Stock.
See what people are saying about this story or others
See Comments in Forum
Previous Next
Pre-Orders
Tomorrow's latest releases