Meet Sherman Klump (Eddie Murphy), perhaps the nicest science professor there ever was. Unfortunately for Sherman, he also suffers from low self esteem due to the fact that he's what might be called "festively plump." Okay -- he's fat. But then one day, while conducting experiments on his beloved stable of pet hamsters, he mistakenly concocts a potion that allows him to transform his body, shedding those unwanted pounds in an instant. Suddenly, the "real" Sherman is unleashed in the form of a new persona -- Buddy Love (also Eddie Murphy). He is confident, even cocky, and can now finally woo the woman he secretly loves, fellow professor Carla Purty (Jada Pinkett Smith). But, of course, there is a catch -- the potion only lasts for brief periods, and Sherman/Buddy's quest to create a permanent version may backfire with disastrous results.

If the story sounds familiar, it's because it is. 'The Nutty Professor' is a remake of the 1963 classic starring Jerry Lewis, and the basic narrative framework has been retained. The big hook for this version, however, was to replace the buck-toothed dork portrayal perfected by Lewis, and replace it with obesity. Murphy here, like Lewis, embodies many different characters (of both sexes and multiple age ranges) throughout the film, only he does most of them under tons and tons of special effects and make-up. If you added up the total pounds of latex of all the various personas Murphy dons in 'The Nutty Professor,' it would probably equal six tons.

Unfortunately, I have one big problem with 'The Nutty Professor': it wants to have its cake and eat it, too. It preaches a story of tolerance and acceptance, yet the majority of its jokes are at the expense of Sherman's weight. As much as I bristle at the idea of political correctness, it's hard to imagine that if the film's crass humor had been directed at race or sexual preference (instead of "fat people") that it ever would have seen the light of day in mainstream cinema.

To be fair, the film is so over-the-top in its comic excesses that it rubs much of the sting off the humor. The film's pivotal scene involves Buddy Love, not long after his initial metamorphosis, getting to take Carla out on a date to a local comedy club. She had previously been taken there by Sherman only a couple of nights before, where he was humiliated by an abrasive stand-up comic, Reggie Warrington (Dave Chappelle). Of course, the irony is that, in many ways, Reggie has done nothing worse than the filmmakers have done the whole movie. Yet, because Murphy is so outrageous as he turns the table on the comic, destroying him with childish one-liners much to the delight of a hysterical crowd, it is surprisingly easy to overlook the film's previous hour of endless, mean-spirited fat jokes and just revel in Sherman's revenge.

'The Nutty Professor' marked a pivotal career turn for Eddie Murphy. After his early-'80s glory days of non-stop blockbusters (including 'Trading Places' and the Beverly Hills Cop series), he floundered in the early '90s with a string of flops too painful to list. Many had written him off by the time 'The Nutty Professor' came around, but Murphy's deft ability to inhabit so many characters convincingly (combined with the film's huge profits) gave him the critical and commercial re-evaluation he so desperately needed.

Indeed, it's a great performance -- Murphy is virtually unrecognizable in many of his latex-heavy guises, yet each character is distinct and memorable. He also invests Sherman with such a genuine humanity that he often manages to elevate the crass shtick to a level of inspired pathos. So if nothing else, see 'The Nutty Professor' to witness why Murphy still deserves to be called one of current cinema's true comedic geniuses. 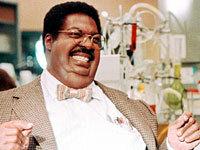 'The Nutty Professor' is already over a decade old, and given some of Universal's past middling HD DVD releases of catalog product ('Army of Darkness,' 'The Jerk') my expectations were low. But to my great surprise this 1080p/VC-1 transfer is vibrant, detailed and eye-popping. It does have a few problems, but it looks far better than I anticipated.

The most impressive attribute of the presentation is its vivid colors. Primaries are often shockingly loud -- reds in particular are almost tiring to the eyes, yet oversaturation is not an issue, with hues always clean and free from noise and bleeding. Detail and sharpness are also excellent -- the image boasts great depth and clarity, with even long-shots really popping. The master is also very clean; though grain is evident (typically of mid-'90s films, before the era of widespread post-processing grain removal) there are no obvious blemishes (such as dropouts and dirt). Blacks are also rock solid, with smooth contrast that doesn't blow-out in the high range.

Knocking the video down a star, however, are a couple of irritants. Fleshtones in particular are an issue, with the palette veering towards the reds, giving the actors a pig-faced look in many scenes. Edge enhancement is also more apparent than on most HD DVD efforts from Universal. Right from the opening scene featuring Eddie Murphy parodying a Richard Simmons infomercial, shimmering on the background curtains and other sharp objects is obvious. The jaggies are not incredibly intrusive throughout the film's runtime, but there is enough edge enhancement that I was distracted. Otherwise, 'The Nutty Professor' is an impressive catalog remaster from Universal.

Universal provides English and French Dolby Digital-Plus 5.1 surround tracks for 'The Nutty Professor,' both encoded at 1.5mbps. Truth be told, the film's sound design is hardly memorable, with little surround activity or sense of immersion.

For a comedy, though, this is a perfectly fine soundtrack. Aurally speaking, 'The Nutty Professor' is a bright, clean movie, with lots of lively sound effects (usually the sound of farts, or clothes popping out of their seams). The rears are spotty, with only the spare effect directed behind the listener, and some bleed on the score and the R&B songs that litter the soundtrack, but dynamics are pretty good, with healthy bass and clean, smooth highs. Dialogue is also placed front and center, with even Eddie Murphy's most outlandish rantings discernible at average volume level.

In a less pleasant surprise from Universal, there is not a single bonus feature on 'The Nutty Professor.' While the studio has released bare-bones HD DVD titles before -- 'Traffic' and 'Army of Darkness' come to mind -- those were cases where the standard-def DVD supplements were produced by independent outfits, so were thus unavailable or unlicensable by the studio for the high-def release. But 'Nutty Professor' came loaded with goodies on Universal's previous standard-def DVD incarnations, so why they've dropped all of them here is a real head-scratcher. Hmmph!

'The Nutty Professor' attempts to be a sweet, good-natured comedy about acceptance and tolerance, yet ironically it revels in crass fat jokes at the expense of its characters. Still, Eddie Murphy turns in a winning performance that is equal parts funny and affecting. This HD DVD release is something of a mixed bag. It certainly delivers on the bottom line, turning in a far better video transfer than I expected, and a solid audio package as well. But Universal's puzzling decision to drop all of the supplemental features that were included on the previous standard-def versions of the disc ultimately makes this one a tough sell.

Sale Price 4.05
Buy Now
3rd Party 2.49
In Stock.
See what people are saying about this story or others
See Comments in Forum
Previous Next
Pre-Orders
Tomorrow's latest releases