Overview - Slick Las Vegas illusionist Buddy "Aces" Israel isn't playing nice. Turns out, he's telling mob secrets to the FBI. After a $1 million contract is put out on him, Aces tries to pull his greatest disappearing act before a rogues' gallery of ex-cons, hit men and smokin' hot assassins tries to rub him out in this dark action comedy that takes no prisoners.
OVERALL
Bad Flick, Good Disc

Why are today's filmmakers still so enamored with Quentin Tarantino? Granted, 'Reservoir Dogs' and particularly 'Pulp Fiction' were genuine cult phenoms and had a huge hand in shaping bold new contours in '90s cinema, but 'Fiction' is now over 13 years old -- isn't it time we moved on from the Tarantino stock-and-trade of crazy criminals, uber-hip dialogue and endless pop culture nods to B-movie crap, to something fresher instead?

Writer/director Joe Carnahan's 'Smokin' Aces' is a none-too-fresh mix of 'Pulp Fiction,' 'Get Shorty' and 'Out of Sight,' only without the storytelling prowess and thematic depth. Yet another "interlocking tale of motley criminals out to make one last score" flick, it's all borrowed parts, and unfortunately none are done particularly well.

Jeremy Piven stars as Buddy "Aces" Israel, a sleazy Vegas magician who has started to turn State's evidence against mob kingpin Primo Sparazza (Joseph Ruskin). After Sparazza places a hit on Israel, the FBI places him under the protective custody of agents Richard Messner and Donald Carruthers (Ryan Reynolds, Ray Liotta) at Aces' Lake Tahoe hideout. When word of the high price on Israel's head spreads, a rag-tag gallery of ex-cons, bounty hunters, thugs and uber-vixens (including Ben Affleck, Peter Berg, Martin Henderson and -- in her motion picture debut -- Alicia Keyes) enter into a comic race to nab Aces and snare the jackpot.

'Smokin' Aces' is a mess on just about every level. Stylistically, it is all over the place. Carnahan is obviously cribbing from the Tarantino playbook, but he only captures the rhyme, not the reason. Carnahan seems to xerox the 'Pulp Fiction' auteur's signature tics with precision -- the "quirky" characters, the narrative cul de sacs, the jump-cuts in time -- but to what thematic purpose? It's like listening to a bunch instruments all playing together, but not really creating memorable music -- a hollow pastiche with no heart. This is made all the more disappointing given that Carnahan made such an impression with his gritty, acclaimed 2003 cop drama 'Narc' -- what happened to his stylistic originality?

The film's real fatal flaw, though, is to mistake the crass for the genuinely comic. Its humor is laced with acid, usually directed at the characters from a cold, removed vantage point, allowing us no entry point for empathy -- all we can do is to try and enjoy mocking their stupidity and idiotic behavior. Which is a shame, because the premise could have certainly been amusing in lighter, more humanistic hands. I wonder what a Simon Pegg (of 'Shaun of the Dead' and 'Hot Fuzz' fame) would have done with the material, or perhaps even Valerie Faris and Jonathan Dayton, the team behind Oscar-winner 'Little Miss Sunshine,' who managed to wring such emotive pathos out of a different sort of story about misfit losers. 'Smokin' Aces' could have been the very likeable, madcap 'Cannonball Run' of hitman movies, but instead it only feels like the ugly, bastard stepchild of 'Ocean's Eleven.'

It's even more of a shame given the film's great ensemble of actors. Piven, Reynolds, Liotta, Keyes, Berg, Affleck -- what a cast! But they're all left floundering, unable to get a lock on their one-note characters. Everyone certainly seemed to be having a big hoot on the set, ranting about and waving their arms acting "crazy," but none resemble anything close to a recognizable human being. Unfortunately, what we're left with in 'Smokin' Aces' is a tremendous amount of talent undermined by a lack of focus, and no real story. Instead, it's 109 minutes of characters running around, shooting guns and delivering crude one-liners -- and that's about it. 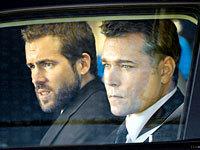 'Smokin' Aces' is a highly-stylized film, and quite frankly, the first few minutes of this 1080p/VC-1 transfer didn't exactly inspire confidence. At first it seemed like this was going to be another one of those cracked-out high-def discs that's all blown-out whites and pumped-up colors, at the expense of detail and realism. But while 'Smokin' Aces' is hardly "natural," the transfer ultimately holds up very well, delivering a three-dimensional, appealing image.

The source is not only pristine, it's been heavily post-processed to smoothe out film grain for a super-slick sheen. Colors can be incredibly intense (especially the impossibly-cyan skies and deep velvet reds), yet amazingly, hues never smear or bleed. Contrast is hot, but it's kept as much in check as is possible with a visual style like this, which keeps detail strong. Close-ups are particularly solid, with every craggily piece of flesh on Ray Liotta clearly visible. Depth is also superior, with the transfer always in razor-sharp focus.

My only complaint is that blacks are a just a bit too strong, with fine details usually lost in the crush. But for a film meant to look as bold and over-the-top as this, this is hardly a huge issue. 'Smokin' Aces' is certainly up there with the best HD DVD transfers I've seen recently.

Universal also gives us a pretty sweet Dolby Digital-Plus 5.1 surround track (at 1.5mbps), and with nary a dull moment, it's an aggressive mix that's sure to please.

Surround use is quite active. Director Joe Carnahan certainly overdoes the "hip" use of rock songs and near-slapstick sound effects, but it creates a consistently lively atmosphere. Pans between channels are slick and nearly-transparent, and stereo effects across the front are excellent. Dynamic range is also top-notch, with a spacious mid-range that's nicely supported by tight, deep bass. Dialogue too is always clean and clear, even if what most of the characters are saying is completely inane. 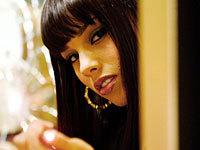 As has become standard with Universal's HD DVD releases, this high-def edition of 'Smokin' Aces' carries over all of the supplements from the standard-def DVD.

There's not one but two audio commentaries, both led by director Joe Carnahan. He's joined on the first track by his editor Robert Frazen, and on the second by actors Christopher Holley, Zach Cumer and Common. Since apparently none of the cast members with any marquee value agreed to do a commentary, the actor track is pretty lame -- the group just laughs at Carnahan's tiring one-liners, and otherwise tend to fall silent. Frazen is a far better foil, even if both he and Carnahan freely admit to getting buzzed throughout their chat. At least we get some fairly insightful riffing on the actors, as well as a sense of Carnahan's obvious love for pulp. I wouldn't call this one a must-listen, though, if only because there is more interesting information imparted on the disc's video-based extras, particularly the HD DVD-exclusive Picture-in-Picture commentary (see below).

A trio of featurettes is next. "The Big Gun" (12 minutes) is straightforward EPK, focused tightly on Carnahan. He kind of reminds me of 'Texas Chainsaw Massacre' helmer Marcus Nispel's chubbier brother, and if nothing else, his enthusiasm about the making of the movie is somewhat infectious. "The Line-Up" (15 minutes) consists of a series of short vignettes focusing on the five main characters in the film, with their respective actors chatting up their motives and acting styles. "Shoot 'Em Up: Stunts & Effects" (5 minutes) is exactly what its title implies, though there is nothing terribly noteable about the action sequences in the film.

Rounding out this assortment are four Deleted Scenes and an Alternate Ending, totaling about 11 minutes. The excisions are predictable character bits, and the rejiggered climax really doesn't change the outcome -- it's just a bit more hyper. There is also a 10-minute reel of Outtakes, which are pretty funny --especially Ben Affleck screwing up at table pool.

Alas, Universal continues to eschew Theatrical Trailers on their HD DVD releases -- there are none included here. However, a nice shout-out to the studio for updating the specs on their back packaging -- disc type and video codec are now clearly labeled, which is a welcome touch.

'Smokin' Aces' desperately wants to a be a Tarantino classic for the new millennium, but quite frankly I found it to be a total mess. It's pretentious and obvious, largely unfunny and about a decade out of date. But while I can't recommend the film itself, at least this HD DVD is a winner, with a slick transfer and soundtrack, and plenty of extras (including an HD-DVD exclusive PIP commentary). If you're a fan of the film, you'll definitely want to pick this one up -- all others, you've been warned.

Sale Price 5.99
Buy Now
3rd Party 1.5
In Stock.
See what people are saying about this story or others
See Comments in Forum
Previous Next
Pre-Orders
Tomorrow's latest releases