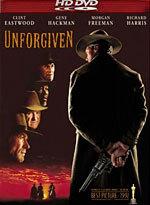 As a kid growing up in the '70s, I would say that the western was probably my least favorite genre (well, aside from musicals, but that's a subject for a different review). I can remember my grandfather obsessively watching old reruns of "Bonanza," "Maverick" and "The Lone Ranger" every night on our little B&W tee-vee, and me just not getting it. I loved horror and sci-fi and drama, and wanted something that wasn't about "old people" -- why should I care about Lorne Greene in a cowboy hat, shooting at Indians?

And that's the attitude I clung to up and through the '90s wave of "revisionist" westerns, led by such blockbusters as 'Dances with Wolves' and Clint Eastwood's 'Unforgiven.' Even after both films took home the Oscar for Best Picture in their respective year of release, I still refused to give in. It was only when I stumbled by chance upon an airing of 'Unforgiven' on cable a few years later, on one of those lazy Sunday afternoons when you have no energy to even change the channel, that I reluctantly gave it a try. And to my great surprise, there I ended up sitting transfixed for the film's entire 131-minute runtime. I suppose the biggest compliment I can pay 'Unforgiven' is that even for a western-hater like myself, it was the first film I ever saw that finally gave me if not a passion for the genre, then at least a genuine sense of respect.

'Unforgiven' is classified as "revisionist" (though technically it should be "post-revisionist," as 1967-1978 saw the first wave of revisionist westerns, but nevermind) because it challenges and subverts all of the cliches and conventions we've come to expect of the genre. Gone or severely undermined are the hallmarks of westerns past -- black and white heroes and villains, gunfights at high noon, the steadfast women who stand by the sides of their men, and the relentless racial stereotyping. The Old West of 'Unforgiven' is untamed and morally ambiguous, with characters of conflicting and complex motives, who kill not out of righteousness but for money, revenge or just plain indifference.

Eastwood's Bill Munny, the protagonist of 'Unforgiven,' is a far cry from "The Lone Ranger." A hired assassin, a remorseless killer, a dedicated family man, he hung up his gun a long time ago, but with his wife now dead and his kids nearly grown, he agrees to one last job. Hired by the madam of a local brother (Frances Fisher) looking to avenge the maiming of one of her prostitutes, Munny accepts the job not of moral obligation or a quest for justice, but for profit. He teams up with his loyal partner Ned Logan (Morgan Freeman) as well as "The Schofield Kid" (Jaimz Woolvert), an all-too-eager would-be killer whose talk is much bigger than the size of his gun. But none of the trio is counting on Sheriff "Little" Bill Daggett, who is so bloodthirsty and amoral he will render the line between right and wrong indistinguishable. By the film's climax, what was supposed to be a simple "hit" will turn into a violent tragedy of mythic proportions.

I like 'Unforgiven' because it shatters all of the most beloved conventions of the western. In fact, you could argue it desecrates them with relish, however respectful. Eastwood is nothing if not an elegant cinematic anarchist. His vision of America's lawless past is not painted in the broad strokes of cherished populism and unfettered patriotism. Instead, it is an ugly, messy place, where justice can only be accomplished with a gun and morality is a relative term. By the time of the film's climactic bloodbath, Eastwood has managed to turn the film's slow burn into an explosion of such fury it practically rewrites cinematic history with one single parting image. Bill Munny may ride off into the night like every other western "hero" before him, but the legacy he leaves remains unduplicated in history of the genre. 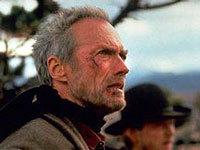 I was actually quite surprised by the HD DVD transfer for 'Unforgiven,' because though the 2002 standard DVD reissue looked quite good, and this high-def version utilizes the same HD master, this disc showed off the HD format's superior capabilities more impressively than I had anticipated.

The most noticeable improvement with the HD DVD transfer is the level of detail. I know, that should be an obvious observation -- but after reviewing Warner's 'Full Metal Jacket' yesterday, it is clear that the quality of the source material can play just as big of a part in how much better a high-def transfer version looks versus standard NTSC video than just the format's resolution. Thanks in part to 'Unforgiven's many panoramic vistas, it is now possible to spot fine details in even the widest shots, from leaves blowing in the wind that previously looked like a mass of green, to more discernible fine textures like the fabric pattern of Eastwood's jacket to the grain direction on a wood wall. Colors were also a bit richer and more distinct, with luminous deep oranges, rich nighttime blues and lush natural greens.

What I also quite appreciated about watching 'Unforgiven' on HD DVD is that it was produced before the era of computer-assisted editing and photography -- as everything today is so tweaked electronically in post-production to give it that perfect sheen. Which may be eye-popping, but isn't particularly natural or subtle. 'Unforgiven,' however, has a truly timeless, very film-like look that is superbly rendered here. Shot quickly in only 39 days, visual style of 'Unforgiven' is traditional yet not dated. Frequently, director of photography Jack Green uses sparse natural light (especially in the nighttime scenes) to bath his actors half in light and half in shadow. Sure, that means less visible detail in the black areas (as the fall-off is so steep), but it feels authentic and sets the tone for the film perfectly -- you certainly wouldn't see this kind of technique used today. So props to this HD DVD for preserving Eastwood's aesthetic so wonderfully, and what a noticeable improvement over the standard DVD release.

However, since I just have to nitpick, I was a bit disappointed that I could still spot some slight edginess to the image during a few scenes, primarily a ringing effect around sharply contrasted objects. This is most irritating in outdoors shots featuring someone standing in front a pretty horizon, leaving a slight "halo" noticeable. I would have hoped this dreaded effect would be completely eliminated on HD DVD, but I guess nothing is perfect (yet), not even high-def.

Presented in English Dolby Digital-Plus 5.1 surround, unlike the video transfer I didn't find the soundtrack offered much of an upgrade over the standard DVD release. To be honest, I couldn't tell much difference even via direct comparison of four scenes in the film (the opening, two mid-section dialogue exchanges, and the final gunfight). Still, if 'Unforgiven' features a solid if unspectacular mix, it certainly suits the film just fine.

More or less subdued throughout the film's entire 131-minute runtime, the mix for 'Unforgiven' is primarily dialogue-driven, enlivened only by sparse atmospheric effects, the minimalist score by Lennie Niehaus, and gunshots. It does have a nice, warm feel to it, with very pleasing dynamic range. I especially like the natural, warm tone to the score and the very clear and distinct dialogue reproduction. Bass response was also hefty and supple, but never overpowered the rest of the mix. Admittedly, surround use is effective in terms of atmospheric sounds and subtle effects, but directionality is only sparingly employed. Generally, this mix is not consistently enveloping, but it does have its moments. 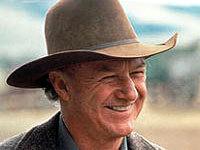 Another straight port of the standard DVD double-disc release from 2002, 'Unforgiven' packs a fairly robust amount of supplements. Unfortunately, as many fans discovered when they picked up the original standard DVD release, quantity does not always equal quality.

First up we have a screen-specific audio commentary by film critic and Eastwood biographer Richard Schickel. Of course, it is disappointing not to have Eastwood on the track, or anyone involved in the making of the film -- but Eastwood just doesn't do commentaries, so there you have it. However, Eastwood and Schickel have maintained a friendship for many years, so Schickel certainly knows his subject. But more than just being articulate and knowledgeable about Eastwood's filmmaking aesthetic, Schickel also spent a considerable amount of time on the set of 'Unforgiven,' and does offer some significant perspective on Eastwood's thematic sensibilities and stylistic technique during the production. Still, while this track is certainly noteworthy in terms of its critical analysis of Eastwood's work, and thus should be of interest to Eastwood historians, I suspect the average fan will likely take a pass.

The meat of the extras lies in the 108-minute documentary "Eastwood on Eastwood," also produced and directed by Schickel. It is a generally terrific, perceptive visual history of Eastwood's illustrious career. Originally produced for cable, Schickel flouts typical practice by dropping the usual cavalcade of cast and crew interviews, opting instead for a one-on-one with Eastwood. John Cusack also narrates, and by interspersing plenty of film clips and production footage, Schickel is actually better able to illustrate the themes and relevance of Eastwood's body of work to modern cinema than on the much-longer commentary track. "Eastwood on Eastwood" still feels a bit academic at times and certainly is far from focused on 'Unforgiven,' but it is still a great watch even for casual fans of the filmmaker.

Unfortunately, of the remaining featurettes, only one was specifically produced for the 2002 DVD, and none particularly deliver the kind of comprehensive look at the making of 'Unforgiven' that I would have hoped. The 2002 featurette "All on Accounta Pullin' a Trigger" does feature then-new interviews with Eastwood, Morgan Freeman and Gene Hackman, amongst others, but at 21 minutes it's just not long enough to go beneath the surface. It is also far too reliant on film clips, which gives it the feel of fluff piece. The film's original 24-minute1992 featurette "Eastwood & Co." is actually better at documenting the making of the movie, as it contains more behind-the-scenes footage and better investigates Eastwood's vision for the film. Last and least is the very odd 16-minute "Eastwood...A Star" featurette, which plays more like an infomercial. Complete with goofy narration, this career retrospective makes it sound as if they're selling Clint by the pound. I thought it was hilarious.

Rounding out the extras is the film's theatrical trailer, and the disc's only total throwaway, an early Clint appearance as a cowboy in the "Duel at Sundown" episode of the classic TV series "Maverick." It doesn't really have anything to do with 'Unforgiven' (aside from the fact that it's a television property owned by Warner), but still it is a hoot to watch. It's presented here in 4:3 pillarboxed video and encoded at 480i.

Definitely among the best of the '90s "revisionist westerns," 'Unforgiven' also stands tall in Clint Eastwood oeuvre as one of his most accomplished, refined and assured works -- and that is saying a great deal. It may have marked the beginning of the twilight years of Eastwood's long and distinguished career, but however cheesy it sounds to say, 'Unforgiven' has truly aged like a fine wine in the past fifteen years. This is a very nice HD DVD release that, though it doesn't offer any new extras beyond the standard DVD release from 2002, certainly looks terrific. What a fine addition to any fan's growing HD DVD library.