Overview - A complete imbecile struggles to make it through life on his own, until a strange invention makes him unbelievably wealthy.
OVERALL
Give it a Rent

'The Jerk' bears the distinction of the being the first R-rated movie I ever got to see without the presence of an adult. I remember sneaking into the film back in the summer of 1979, in a half-empty theater on a breezy, late Sunday afternoon. I, of course, thought I was the coolest kid on the block, getting to see what I was sure was going to be a ribald, filthy, nudity- and profanity-laden exercise in bad taste.

But as it turned out, (much to the disappointment of my childhood self) 'The Jerk' really isn't what its title would seem to imply. Instead it's actually a rather mild-mannered if zany satire on class and race relations, with a sweet nature that's full of considerable heart and humanity.

Steve Martin got his first starring role as Navin Johnson, a complete idiot born a "poor black child" to a Mississippi family of sharecroppers. Despite his idyllic childhood, by the time he turns eighteen, naive Navin yearns to experience life, and heads off to the big city of St. Louis, where he takes on a series of odd jobs and misadventures (his ecstatic response to first learning his name has been published in the phone book is priceless), and meets the beautiful Marie (Bernadette Peters), who will eventually become his wife. It is also in St. Louis where Navin unexpectedly strikes it rich as the inventor of a fad gadget called the "Opti-Grab." But as Navin soon learns, riches are hard to hold onto when you're an idiot...

'The Jerk' was directed by that master of goofball silliness, Carl Reiner ('The Man With Two Brains,' 'Summer School'). It marked Reiner's commercial pinnacle, as well as Steve Martin's first blockbuster vehicle. Yet 'The Jerk' seems to have been lost a bit in the mist of time -- outside of its basic premise, most of its original audience is likely hard-pressed to remember much about it.

Yet almost three decades on, 'The Jerk' is still pretty funny. I was struck by how subtle but pointed Reiner's satire could be. Perhaps it's Martin's almost vaudeville-like approach to the material -- the tone is so screwball, and the characters so absurd that it elevates the racial caricatures and one-note plot contrivances to the level of inspired lunacy. I particularly liked the way Reiner and Martin skewer various pop culture inanities of the '70s, from disco to self-help gurus to get-quick rich inventions. It's like the precursor to 'Forrest Gump,' only with a lead character even stupider -- still, the film itself is just as smart.

Funny enough, all these years later, the only real problem I have with 'The Jerk' is with its title. Technically, a jerk is someone lacking in sensitivity or caring for others. Navin is none of these -- if anything, he's a bundle of self-possessed, positive energy. Had he been crass or mean-spirited, 'The Jerk' would have been a completely unpleasant farce, but because Navin is such a good-natured imbecile, he and the film are both likable and warm. In fact, as portrayed by Martin -- full of his manic tics and spastic rhythms -- Navin becomes a singular, quite memorable character. All he deserved was a movie with a more appropriate title. 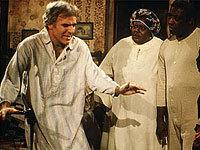 'The Jerk' was finally remastered on standard-def DVD in 2005, as a "26th Anniversary Edition." It was the first time the movie had ever appeared in widescreen on home video, and this HD DVD has been minted from that same master. But while this 1080p/VC-1 transfer looks great on paper, the truth is 'The Jerk' was never a visual tour de force, and even with limited expectations, it's hard to get that excited about "high def" that looks, well, pretty standard.

The print has been cleaned up of all major defects, such as splice marks, deterioration, etc. However, it's still pretty dirty and quite grainy -- dark scenes in particular look quite poor. Colors enjoy the biggest upgrade over standard-def, with fleshtones a rather nice orange and some primary hues exhibiting boldness. Detail is simply crappy -- the image is usually flat, with only the brightest exteriors exhibiting any sense of impressive detail. Edge enhancement is also apparent -- the flat image has clearly been digitally tweaked to improve sharpness, but the drawback is noticeable edge halos. 'The Jerk' is not unwatchable, but it definitely falls in the lower rung of HD DVD releases out there.

Universal's Dolby Digital-Plus 5.1 surround (1.5mbps) remaster of 'The Jerk' isn't any better than the video. It may as well be a stereo mix, with the film's dull sound design hardly involving.

Surround use is about nil -- I think I heard a bit of bleed on major effects, but that's about it. Dynamic range is completely flat. There is no sense of openness to the mid-range, and low bass is also flat. Dialogue is also problematic, as even at a decent volume level I often struggled to understand more quiet dialogue. At least there are no major problems with the soundtrack, such as distortion or hiss. But that's hardly a huge compliment.

Given that 'The Jerk' was a big box office hit, it's surprising that it hasn't been heald in greater esteem over the years, outside of its cult fanbase. This is certainly not considered a comedy classic on par with a 'Producers' or 'Animal House.' That said, I still expected better supplements here -- I guess none of the film's cast or crew could be bothered to talk about the movie, or perhaps they simply weren't asked?

Instead, all we get are two "extras." The first is something called "The Lost Films of Father Carlos de la Vega." Apparently, some fans created various shorts paying homage to their beloved film. So are they any good? Well, not really.

Then there is an interactive tutorial on how to play the song "Tonight You Belong To Me" on the ukulele. Seriously -- they pay people to produce supplements like these?

Finally, there is the film's Theatrical Trailer, in pretty bad quality 480i video.

'The Jerk' may be a silly, inconsequential movie, but it's still pretty funny almost thirty years later. This HD DVD release, however, is pretty marginal. The transfer and soundtrack are just decent, and little obvious care went into creating the extras. Still, the movie is enjoyable enough that I'd recommend it as a rental for '70s comedy fans.

Sale Price 4.98
Buy Now
3rd Party 29.33
In Stock.
See what people are saying about this story or others
See Comments in Forum
Previous Next
Pre-Orders
Tomorrow's latest releases