Overview - Doc McCoy has been granted parole. The catch is that Sheriff Beynon expects a small favor from McCoy for his generosity: robbing another bank! Beynon does not really intend to let McCoy walk away after the heist and neither does co-robber Rudy Butler, but stopping Doc proves a trifle difficult.
OVERALL
Recommended 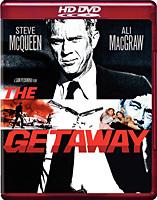 First off, a confession: before watching the next-gen editions of the 1972 cult classic 'The Getaway' for this review, my only previous experience with the movie was having seen the utterly dreadful 1992 remake starring the then husband-and-wife team of Alec Baldwin and Kim Basinger. Needlesstosay, it was hardly a great introduction to the film's concept, and didn't inspire high hopes as I sat down to watch the original.

Happily, the 1972 version of 'The Getaway' easily wipes the floor with its evil modern doppelganger. It's superior in every way, from director Sam Peckinpah's lean-and-mean visual style to the red-hot chemistry of its lead actors. Baldwin and Basinger don't come close to the incendiary sex appeal of the original's real-life husband-and-wife team of Steve McQueen and Ali MacGraw. When these two appear in the same shot, the heat is palpable -- 'The Getaway' didn't just blur any distinction between on-screen and off-screen chemistry, it erased it.

The story takes off right from the first scene. McQueen is career criminal Carter McCoy, a soon-to-be-ex-con whose only reason for getting out and staying clean is his beautiful, resolutely loyal wife Carol (MacGraw). But after Sheriff Beynon (Ben Johnson) helps arrange parole, Carter figures out the catch: Beynon expects a small favor in return -- robbing yet another bank. Of course we know (and Carter knows) that Beynon doesn't really intend for the McCoys to walk away after the heist. And neither does the team's accomplice Rudy Butler (Al Lettieri) or his daffy girlfriend Fran Clinton (Sally Struthers -- yes, that Sally Struthers). So the team hatches a plan to successfully pull off the robbery and elude the Sheriff, a feat which will, of course, prove a lot more difficult -- and bloody -- than expected.

Though technically McQueen and McGraw were not actually married at the time of 'The Getaway' (they got hitched soon after), their burgeoning love story is clear in every frame of the film. Admittedly, I found MacGraw's skills limited as an actress (she gives new meaning to the word "wooden"), but it ultimately matters little. Carol/MacGraw and Carter/McQueen's feelings for each other are overpowering to the point of melting off the screen, so we do believe they'd be so head-over-heels stupid for each other that they'd land in such destructive predicaments. As he did with 'The Wild Bunch' and 'Straw Dogs,' Peckinpah's characters work simultaneously as pulpy caricatures and believable, three-dimensional human beings ultimately done in by misplaced loyalties and reckless abandon.

Which is not to say that the film doesn't have problems, starting with the pacing, which is likely far too slow for today's audiences. Peckinpah always took his time anyway, but the second act in particular drags, and the climax doesn't ever really shift into high gear in quite the same way as a 'Straw Dogs'. The action is also too sporadic and even a bit campy at times, with MacGraw sometimes looking like she's channeling Kate Jackson in the original 'Charlie's Angels' TV series.

But nevermind that -- 'The Getaway' still works, if only for three reasons: it's got style to burn, it's characters are all nasty and unrepentant anti-heroes, and... did I mention that McQueen and MacGraw are totally hot together? Add to that an effective, gritty neo-documentary style, some very droll social commentary (check out the scene on the train between McQueen and the kid with the toy squirt gun) and a great, jazzy score by Quincy Jones, and this is another uber-hip McQueen vehicle that's easily up there with his best action efforts, including 'Bullitt' and 'The Great Escape.' 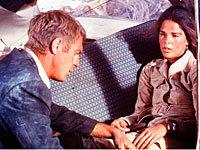 'The Getaway' joins 'Bullitt' as part of Warner's unofficial "Steve McQueen rocks your world in high-def" release blitz, and I actually think I preferred this one a little bit over its more well-known, highly-acclaimed cousin. This is a very nice, quite clean remaster, presented on HD DVD and Blu-ray in a 2.35:1 widescreen (mislabeled as 1.85:1 on the box) 1080p/VC-1-encoded transfer.

The source looks mighty fine for a film now thirty-five years old. The film does look earthy, a bit dark, and with a thin layer of (unobtrusive) grain. There is the occasional dropout and a few white speckles, but nothing extreme or distracting. Colors also hold up well, with fleshtones a vivid orange, except during a few sporadic, washed-out shots. Some of the brightest outdoor exteriors, such as Carter's first day out of prison visiting a park, are actually quite flush with vivid primaries. The transfer's overall depth and detail is rather good. Sure, it's soft throughout by today's standards, and lacks intense pop, but I was impressed far more often than not. The only truly distracting problem area is a handful of shots that look dreadful, including what looks like a stock shot of a train passing by that is horribly grainy and washed out. Otherwise, 'The Getaway' is another quite laudable catalog effort from Warner.

Unfortunately, 'The Getaway's audio shows its age. Warner was only able to salvage a straight Dolby Digital 1.0 mono track out of the original source elements, and as you might expect, the track sounds muted and bland.

Low end just sits there, lifeless. Dialogue reproduction is clean, but it sounds like it was recorded with one of those old Mr. Microphone things they sell on late-night informercials. There is also no real sense of dynamics to the mix at all. Of course, with a mono track, there is no sense of envelopment to speak of, either, not even decent stereo separation. The positives are mainly distortion-free source elements and no obvious aural deficiencies. But this is certainly not a soundtrack to get excited about. 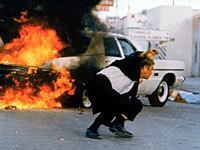 Like with 'Bullitt,' which hits HD DVD day-and-date with 'The Getaway,' Warner has pulled out a nice selection of new and vintage extras. Though of course there will always be a huge hole due the absence of the late Steve McQueen, the studio certainly didn't skimp on these titles.

Kicking things off are two commentaries. The critical track is pretty straight-forward, featuring Sam Peckinpah biographers and scholars Garner Simmons, David Weddle and Paul Seydor, and moderated by Nick Redman. It's truly excellent, one of the best I've heard in quite a while. Peckinpah was, of course, legendary in Hollywood -- not just for his films, but his irascible, self-destructive character. This track is as much about Peckinpah's colorful life as it is about 'The Getaway,' but it is consistently fascinating. A true must-listen even for casual Peckinpah enthusiasts.

The second track is a "Virtual" commentary, so named because it is a spliced-together assemblage of interviews with Peckinpah and McQueen (both deceased), plus Ali MacGraw, along with still photos overlaid to illustrate the speakers. Unfortunately, it also only lasts about 11 minutes -- enough to cover the first reel of the film -- so really this is more like an audio-only featurette. But I guess it is better than nothing.

Rounding out the extras is the film's rather lengthy (over 3-minute) Theatrical Trailer, plus bonus trailers for other Peckinpah gems 'The Wild Bunch' and 'Bring Me the Head of Alfredo Garcia.'

'The Getaway' may be second-tier Sam Peckinpah, but that's still better than 90 percent of the crap that passes for a hard-boiled action flick these days. And watching Steve McQueen and Ali MacGraw drool over each other is always a big-screen turn-on. Add to that another top shelf HD DVD catalog effort from Warner -- great transfer, soundtrack and extras -- and 'The Getaway' is a no-brainer for Peckinpah devotees. All others, at least give it a rent... it's a fun, gritty ride.

Sale Price 9.86
Buy Now
3rd Party 7.66
In Stock.
See what people are saying about this story or others
See Comments in Forum
Previous Next
Pre-Orders
Tomorrow's latest releases