Overview - Academy Award winner Denzel Washington, Academy Award nominee Clive Owen and Academy Award winner Jodie Foster star in this intense and explosive crime thriller. The perfect bank robbery quickly spirals into an unstable and deadly game of cat-and-mouse between a criminal mastermind (Owen), a determined detective (Washington), and a power broker with a hidden agenda (Foster). As the minutes tick by and the situation becomes increasingly tense, one wrong move could mean disaster for any one of them. From acclaimed director Spike Lee comes the edge-of-your-seat, action-packed thriller.
OVERALL
Recommended

Known primarily for his work directing flicks that tackle controversial social issues, it’s always a surprise when Spike Lee’s name is attached to more traditional material. But while ‘Inside Man’ may not focus on the same sort of hot-button issues as a ‘Do the Right Thing’ or a ‘Malcolm X,’ the director’s imprint remains clearly evident in this cops-n-robbers genre flick.

The film itself tells the story of three opposing forces: brilliant thief Dalton Russell (Clive Owen), stubborn detective Keith Frazier (Denzel Washington), and headstrong power broker Madeleine White (Jodie Foster). When Russell makes the employees and customers of a New York City bank his hostages during a robbery, Frazier and his partner (Chiwetel Ejiofor) arrive on the scene to bring the thief down. The volatile situation is made even more complicated when White arrives with instructions from the wealthy owner of a safety deposit box (Christopher Plummer) and a hidden agenda of her own. Before the chips have fallen in this non-linear action-drama, loyalties will be questioned, discoveries will be made, and Russell may just pull off the perfect crime.

’Inside Man’ may rely on a typical genre setup, but the end result is far from predictable or ordinary. Indeed, even from the film’s opening scenes, it’s clear that Lee has grand plans for what might otherwise have been a typical heist film, infusing his characters with complexity, enhancing the dialogue with an usually authentic rhythm, and adding a unique visual twist to the film's aesthetic. The director's confident voice and vision permeates every frame, and I never felt as if the story was in the hands of anyone but a master craftsman.

The performances are equally exceptional. Washington brings his usual commanding presence to the screen and seems to obviously be enjoying the chance to work on another "Spike Lee Joint." Playing off Washington's headstrong detective can’t be easy, but impressively, Ejiofor manages to upstage his leading man on more than one occasion. His portrayal is measured yet explosive, with the actor delivering what is arguably the most convincing performance in the film. Foster and Plummer also turn in suitably juicy performances, but it’s Owen who seems to having the most fun. His character is violent and unforgiving, yet he injects him with a likeability that leaves the audience rooting for him to get away with it all. Last but not least, I would be remiss if I didn’t mention Willem Dafoe’s supporting role as a police captain. Although his part in the film is small, Dafoe’s commitment to his role is yet another strong performance from a truly extraordinary cast.

Without giving away any of the film’s secrets, a flick like ‘Inside Man’ wouldn't work without a proper ending, and here too Lee delivers the goods. A puzzle that only comes together at the film’s conclusion, it is both surprising and wholly satisfying, demonstrating an impressive cohesiveness and an impeccable attention to detail that may make the film even better on its second viewing.

Atypical for a heist film, ‘Inside Man’ pairs an intricate plot with strong character development for a one-two punch that’s not only engaging, but thought-provoking as well. Even if you’re not a Spike Lee fan, here’s betting you’ll enjoy this highly effective flick. 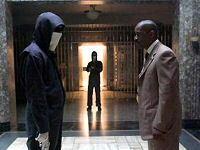 'Inside Man' boasts a striking 1080p/VC-1 transfer that’s a substantial step up from the standard-def DVD. As usual, colors receive the most noticeable upgrade, with a strong palette and impeccable fleshtone saturation. Contrast is stark but comfortable, blacks are deep, and the image has a convincing level of depth. On the whole, detail is deftly rendered -- skin textures are naturalistic, brickwork and sidewalk cracks are crisp, and background elements inside the large police RVs (such as papers and coffee cups) are as clear as they were in the theater.

Grain density varies slightly from shot to shot, but I never found the fluctuations to be distracting. The source itself is also beautiful; I didn't catch any artifacting, noise, or edge enhancement. In fact, my only minor issue came as a byproduct of Lee's intentionally high contrast, which often leads to crushing and hot whites. While it clearly matches the film’s aesthetic, it does drown out visibility and details in the shadows.

Small complaints aside, 'Inside Man' remains a visual winner from Universal. Fans and newcomers alike are likely to be wowed by this disc’s overall picture quality. 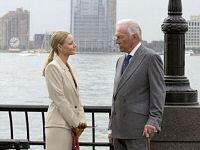 The hits just keep oncoming. 'Inside Man' features a robust Dolby TrueHD 5.1 surround mix (48 kHz/16-Bit/2.3 Mbps) that dwarfs recent audio offerings from other high-def dramas. Although the film itself is primarily conversation-driven, the environments are packed with realistic acoustics, impressive ambiance, and active surrounds. Just listen to any scene that takes place in the streets of the city. Hear the cars in the distance? The rambling officers in the background? The quiet footfalls of people rushing by? This isn't sound design -- it's sound illusion.

Pans are swift and directionality is spot on. When gunshots or action scenes pop up, solid dynamics follow suit, generating earthy bass rumbles and sharp treble tones. My only complaint is that the music score can overwhelm the mix at times; dialogue in the film is prioritized until the music swells and sometimes muffles conversations. Even so, this powerful and meticulously produced TrueHD track will impress even the most-hardened audiophiles. 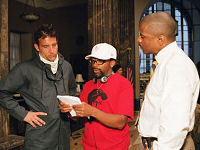 This HD DVD edition of 'Inside Man' carries over all of the supplemental content from its standard DVD counterpart, and although it’s a somewhat slim package, it least what we do get is worth watching.

First up is an intriguing commentary track with Spike Lee that gives the outspoken director over two hours to weigh in on everything from the American moviegoer to studio system politics. Oh yeah -- he also manages to throw in his extensive thoughts on the film itself. While some may find his tangents a bit frustrating, there's an engaging logic to his comments, and he never comes across as unfocused. He does fall silent a bit too often for my tastes (especially when the third act rolls around), but overall this is a fine track that's worth your time.

Next comes a decent collection of "Deleted Scenes" (20 minutes), which add some nice character beats, as well as a few alternate takes (specifically of the post-robbery interviews) that will be of interest to fans.

Rounding out the package are two featurettes: a promotional segment titled "The Making of ‘Inside Man’" (10 minutes), and an engaging interview called "Number 4" (10 minutes). While the first is pure studio fluff, the second is a great chat between Spike Lee and Denzel Washington. Sure, the two are good friends who pat each other on the backs freely, but they also discuss the four films on which they've worked together. I really dug the candid tone of the conversation and found myself wishing that this featurette had been longer.

(Note that all of the video features list above are presented in 480i/p video only.) 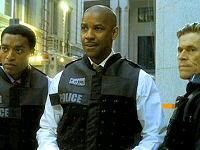 This HD DVD edition of ’Inside Man’ pulls off a rare high-def trifecta, pairing a strong film with an excellent video transfer, and a superb TrueHD audio track. Although a somewhat slim supplements package (an exact match with the standard-def DVD) is a slight drag on the overall grade, don’t let that stop you from picking this disc up. This one’s an easy recommend for fans and newcomers alike.

Sale Price 17.3
Buy Now
3rd Party 17.3
In Stock.
See what people are saying about this story or others
See Comments in Forum
Previous Next
Pre-Orders
Tomorrow's latest releases