Overview - In the cold land of Antarctica, the Emperor Penguins each express their true love with a special heartsong of their own that expresses their very being. However, the misfit Mumble cannot sing, but instead has an extraordinary talent to tap dance with almost magical energy and expression. Nevertheless, the deeply conformist leadership of the colony fearfully blames the young penguin's unorthodox ways for the lean fishing that threatens them all. Defiant in the face of unjust rejection, Mumble and his true friends set out to find the true cause of the famine. Through the motley crew's trials and perils, Mumble learns many things about his frozen world, not the least of which being that his toe tapping talent may be what he needs to save his people.
OVERALL
Recommended 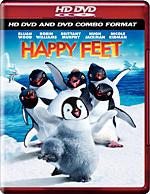 Was 2006 the Year of the Penguin? Things started off very well for our little arctic friends, who saw their blockbuster hit 'March of the Penguins' take home the Oscar for Best Documentary. That was followed by a surge in all penguin-related kids toys and merchandise, a retail phenomenon not seen since the dinosaur craze of the early-'90s post-'Jurassic Park.' Then came 'Happy Feet' in late November, which topped the box office throughout that month, even fending off the formidable challenge of James Bond in 'Casino Royale.'

Turns out all this sphenisciformes-worship is not misplaced. 'Happy Feet' is a simply wonderful animated adventure -- a movie alive with wit, charm, memorable characters, great songs, terrific animation and a heart-warming message about tolerance and understanding. It's the kind of movie that washes away the bad taste left by so many bad, big-budget Hollywood animated vehicles, and recalls the best Disney and Pixar efforts. If ever a movie was so adorable you just wanted to hug it, 'Happy Feet' is it.

Mumble (Elijah Wood) is a cursed penguin, because he was born with no singing ability, and in his penguin tribe one attracts a mate through the use of song. Our poor hero can only watch with mounting shame as his fellow hatchlings belt out their merry melodies, finding both love and the approval of their parents and peers. However, Mumble does have one most peculiar talent -- he can tap dance, which is quite frowned upon in penguin society. With no "heart song" to guide him, Mumble isn't allowed to graduate from school, much to the dismay of of his rockabilly-esque dad (Hugh Jackman) and chanteuse mom (Nicole Kidman).

Things will get more complicated for Mumble when he falls heart over fin for Gloria (Brittany Murphy), the most talented songbird in his class, but is unable to woo her. Even worse, the penguins' food supply begins to run out, which other birds begin to blame on Mumble's dancing, suggesting that he has somehow angered their great god Guin. Ousted from his community, Mumble becomes an orphan, eventually falling in with another penguin society that uses pebbles to attract a mate instead of song. Discovering a newfound acceptance and pride, Mumble manages to make new friends, and sets off on a quest to find more fish to keep the penguin food supply going, and maybe -- just possibly -- return to his home community a hero.

Directed by George Miller (the 'Mad Max' movies, 'Babe' and its sequel), 'Happy Feet' succeeds on just about every level. We immediately love little Mumble and his family. The story grabs our attention from the first frame and pays off with a strong, emotive resolution. The songs are immediately recognizable but imaginatively reinterpreted, and never descend into bad karaoke. The animation is exquisite and captivating, with many sequences simply breathtaking. And the voice cast is A-list, yet I was never distracted by the big stars' voices -- instead, each inhabits their character and turns them into a fresh creation. This goes for all the leads, including Robin Williams who voices no fewer than four roles, Kidman and Jackman ditching their Australian accents to go American southern, and Elijah Wood, who never once comes off as Frodo dressed as a penguin.

There was a considerable amount of fuss made during 'Happy Feet's theatrical release by certain conservative family groups, apparently over the films overt liberal, eco-friendly message. I have to admit to being mystified by such claims. 'Happy Feet' is really a story about how it's okay to be different. It's also about how some people will refuse to let go of even the most outdated prejudices and biases no matter how illogical, and how these prejudices can be passed on from parents to children. This is a message that's as old as the hills in animated movies, so why such groups chose to single out 'Happy Feet' is a mystery to me.

In any case, don't let the controversy steer you away. 'Happy Feet' is one of the most joyous, enjoyable animated movies to come out of Hollywood in years. It is, in my opinion, as good as any of the best efforts from Disney in recent years, and the true meaning of a family film -- it appeals to the child in all of us but never condescends to the intelligence of adults. So don't be surprised if it is not only your kids who want to watch 'Happy Feet' a hundred times in a row. 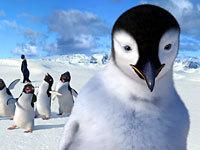 With all the anticipation building up for the first Pixar title to be released on high-def (as of this writing, it's due to be 'Cars' on Blu-ray this June), it is easy to forget that there are other top-tier animated titles being produced by the major studios. 'Happy Feet' is a case in point. It's a gorgeous-looking film, and for my money, Warner has delivered the finest transfer of an animated movie I've yet seen on HD DVD. Quite simply, this 1080p/VC-1 encode is flawless, and it's going to be the title I whip out as first-choice demo material when I want to show off how great animation can look in high-definition. (Note that both the HD DVD and Blu-ray versions of 'Happy Feet' contain identical encodes, right down to the bitrate.)

The level of detail is truly breathtaking. Visible texture is superlative, from individual feathers on the animals to the shimmering reflections off of the arctic waters. Long shots of hordes of penguins are so detailed I could make out definition on the individual birds that should haven been just mere blobs of pixels. A quick comparison with the standard-def version included on this HD DVD/DVD combo makes it clear just how much of an improvement the high-def version really is. Where even close-ups of penguin skin in standard-def looks like blue-back tar, on the HD DVD fine gradients of color are much more pronounced. The chilly arctic skies and landscapes are also far more life-like, with a cleanliness and clarity which is thrilling to watch.

'Happy Feet' is also a beauty of an animated movie. The color palette is more deep and vivid than I expected, eschewing the more pastel-look of most kiddie fare. Reds, purples and yellows have a flush look that, while bold, do not oversaturate. And though blue is the dominant color of 'Happy Feet,' the film's visual look never gets boring, as the animators add splashes of rich oranges and greens throughout in imaginative, unexpected ways. Warner has also delivered a fine master, with the direct digital-to-digital conversion absolutely free of any compression artifacts or source issues. Truly fantastic stuff.

'Happy Feet' is really a musical, but it uses modern pop and rock favorites which tend to need far more kick than Broadway show tunes to be effective. I'm happy to report that the included Dolby TrueHD audio track on this HD DVD release does not disappoint.

From the opening sequence, which uses Prince's classic 'Kiss' to hilarious effect, the dynamic nature of this TrueHD track is obvious. Frequency response is terrific, from the drum-tight low bass to very spacious mid-range. All the voices sound fantastic, with a smooth clarity to the highs that really soars. Surrounds are also nice and aggressive, from all manner of discrete effects (the sea lion and whale attack sequences are particular standouts) to excellent integration of the score and songs. Movement is often directed all around the soundfield with pinpoint accuracy, and imaging is seamless. I also have nothing to complain about in terms of ambiance, with even milder scenes usually having something going on in the rears, which keeps the soundtrack alive and immersive. In both video and audio, 'Happy Feet' hits an home run. 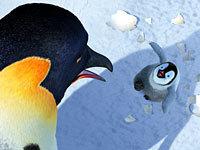 My only disappointment with 'Happy Feet' is how nearly bare-bones it's initial disc release is. The HD DVD, Blu-ray and standard-def DVD all include the same features, but it's a slim package. I can only suspect that Warner rushed this one to video and is holding back the really good stuff for a future double dip. As is, what we get is pure promo fluff, save for a couple of cut sequences.

The highlight by far is a quick 3 minutes of Deleted Scenes. There are two clips: "Mumble Meets a Blue Whale" and "A Happy Feet Moment." The latter is so brief as to barely count as a scene at all, but the former is notable for boasting some outstanding animation that rivals anything seen in the film proper. This one is really worth watching just to see some truly terrific high-def. (Both scenes are presented in full 1080p video.) Director George Miller also offers a heartfelt new introduction to the scenes, dedicated to the late Steve Irwin.

Under the "Fun & Games" section is the classic Warner Bros. cartoon short "I Love to Singa" (which oddly has nothing to do with penguins), and a rather annoying "Dance Like a Penguin: Stomp to the Beat" 5-minute dance lesson with dancer/choreographer Savion Glover. It's only amusing for Glover's unintentionally hilarious pronunciation of the word "Balaaannnncceeee!", which he repeats over and over.

Wrapping it up are two 4:3 full screen music videos, for Prince's "The Song of the Heart" and Gia's "Hit Me Up," plus the film's Theatrical Trailer, which is the only extra (aside from teh aforementioned Deleted Scenes) presented in 1080p video.

'Happy Feet' is a truly adorable movie. Despite the controversy surrounding the film's eco-friendly message, I found it to be an inspirational story about individuality first and foremost, not a polemic. It also boasts outstanding animation and top voice talent. Warner has delivered an HD DVD release of truly fantastic quality -- the video and audio are simply superb. It's Dolby TrueHD track is also a notch above the Blu-ray, which doesn't enjoy the same high-resolution audio. The only negative is how supplement-starved the disc is -- I can only surmise a double dip is on the way. But no matter. If you're looking for a reference-quality high-def demo disc, 'Happy Feet' is sure to leave you dancing with delight.

Sale Price 14.95
List Price 30.98
Buy Now
3rd Party 0.39
In Stock.
See what people are saying about this story or others
See Comments in Forum
Previous Next
Pre-Orders
Tomorrow's latest releases