Overview - The story of three not so bright men who come up with a series of crazy schemes to get a friend out of jail.
OVERALL
For Fans Only 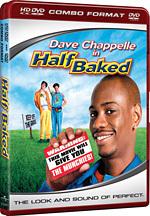 From the "we're so desperate we'll release anything" department comes 'Half Baked,' a comedy that is only seeing the light of day on HD DVD because of Dave Chappelle. Hollywood's $60 million disappearing act went from one-time fledgling stand-up comic to DVD goldmine after his series "The Dave Chappelle Show" became a breakout hit on Comedy Central and, as of this writing, remains the top-selling TV DVD title ever. Somehow, I doubt 'Half Baked' will follow suit with this release. It's hard to imagine even Chappelle's most dedicated fans warming to a low brow, Cheech & Chong rip-off as, well, half-baked as this one.

The plot, if you dare: Thurgood (Dave Chappelle) and his four buds Scarface (Guillermo Diaz), Brian (Jim Breuer) and Kenny (Harland Williams) sit around and smoke pot all day. That is, until Kenny lands in jail for killing a diabetic police horse by feeding it a massive helping of the Scooby snacks. Hoping to raise bail for Kenny, Thurgood discovers that the medical supply company where he works as a janitor is testing marijuana, so why not skim a bit off the top and sell it on the street? Too bad Thurgood and the gang forgot about the local drug lord (Rick Demas), who is none too happy to see his territory invaded by three total idiots.

'Half Baked' is a movie that is impervious to criticism. It's no use calling it dumb, ignorant and a blight on society, because it already knows this. Nor can you really beat it to the punch, when it knows it is its own punchline and forces you to laugh with it, not at it. Admittedly, I did laugh at some of these shenanigans. I was never a big fan of "dope comedy" and the Cheech & Chong flicks -- you can only stretch the joke so far before it evaporates in a puff of pot smoke -- but Chappelle, Williams and especially Breuer are so completely, utterly, over-the-top immature that I started to begrudgingly admire their desperate need to entertain. It does all feel a bit like a Mad TV sketch that goes on way too long, but there are still enough hits among the misses here to earn a surprisingly high laugh-to-cringe ratio.

Ultimately 'Half Baked' is most noteworthy as being Chappelle's first leading role, and he does exhibit a few signs of the sketch comedy genius to come. I particularly enjoyed the 'Jerry Maguire' spoof, which showcases Chappelle's skill at mimicry and his ability to nail the heart of an absurd pop culture moment. I also suspect Chappelle knows his way around a joint, as the movie's little nuances -- the smoking rituals, the different ways of scoring pot, dealing with "dry periods" -- all ring true. (Not that I'd know, of course -- ahem.) These are the best moments of the film, and had Chappelle and the rest of the filmmakers aimed just a little bit higher, they might have created a truly memorable little sleeper, instead of a mere guilty pleasure. Instead, even at a brisk 83 minutes, 'Half Baked' offers little more than the same recycled pot jokes, over and over.

'Half Baked' is almost ten years old now, so I have no idea how long the master for this one has been sitting in the vaults of Universal, but it doesn't look half-bad. It's certainly no 'Hulk' or even a 'Happy Gilmore,' but the source material has held up pretty well.

I noticed no issues with compression or other artifacts, and colors are trippy, to say the least. The film has a psychedelic palette, which this HD DVD certainly handles with aplomb. Hues remain rock solid and free of noise, and blacks are spot-on. The image has nice pop, with strong contrast that is a tad on the hot side, but not severe. Detail is decent, although the film does has a somewhat soft look throughout and doesn't have the greatest amount of depth. Finally, the transfer can be somewhat grainy, which makes sense given the film's fairly low-budget.

The HD DVD side of this combo disc sports a Dolby Digital-Plus 5.1 surround track (a DTS version is only available on the standard-def flip). Quite frankly, it is your typical boring, "comedy soundtrack," meaning little effort seems to have gone into it outside of its booming rap songs.

The most important aspect is the dialogue, which is reproduced cleanly, although it does sound rather flat. It has a cheap quality, with the high-end occasionally veering into irritating territory and mid-range slightly muffled. It doesn't help that stoned people, or actors playing stoned people, don't enunciate their words very clearly. As you might expect, 'Half Baked' is hardly an immersive experience, with only the rap songs blaring out of the rears. The songs do boast some pretty decent bass, though -- thank goodness for small favors. But that's about all the excitement you're going to get out of this one.

'Half Baked' on HD DVD carries over all the extras from the "Fully Baked" standard-def edition (seriously, that is what it was called). Don't roll up a joint and celebrate, though, as most of this stuff is about as enticing as a week-old pan of pot brownies. (Note that the only extra on the HD side of the combo is the commentary; the rest all live on the standard DVD flipside.)

The best extra is the audio commentary by director Tamra Davis, the one-time indie darling. I do admire her for having a good sense of fun. She mostly passes out props to co-writers Dave Chappelle and Neal Brennan, and also discusses the "real-life" inspirations for characters. On the downside, Davis tends to meander, and though there is little silence, oftentimes an entire scene would go by with nothing of import discussed. But hey, she tried.

Up next are ten minutes of Deleted Scenes, plus an Alternate Ending. All of the Deleted Scenes are pretty lame, and all except one are actually scene extensions. The Alternate Ending is also similar to the final cut, with only a bit of extra dialogue and a slightly rejiggered conclusion. The quality of these scenes is also really, really bad, with some of the worst-looking 480i video you'll see.

Rounding out the "fun" are three featurettes, but they are really just jokey vignettes. "Different Types of Smokers" is a six minute animation depicting the different ways one can light up. "Five Minutes With 'The Guy on the Couch'" is literally just that -- five minutes of Steven Wright lying on a couch. Finally, "Granny's Guide to Baking" is just a silly old lady and her faux recipes, all of which have which have some sort of marijuana-related double meaning. Ha.

'Half Baked' would never have been heard from again if it weren't for Dave Chappelle. As stupid stoner comedies go, I suppose it is no worse than renting an old Cheech & Chong movie. But really, how many people want to do that, let alone in high-def? Having said that, this HD DVD release is perfectly fine, with a solid transfer and the same reheated 480i extras from the standard-def release. This one is definitely for fans only.

Sale Price 31.99
Buy Now
3rd Party 31.99
In Stock.
See what people are saying about this story or others
See Comments in Forum
Previous Next
Pre-Orders
Tomorrow's latest releases