Overview - From Academy Award nominated filmmaker John A. Davis (Jimmy Neutron: Boy Genius) and producers Tom Hanks and Gary Goetzman (The Polar Express), The Ant Bully tells a witty and heartwarming story about a 10-year-old boy who embarks on a remarkable journey. New in town, friendless and tormented by a neighborhood bully, young Lucas Nickle has been taking out his frustration on the innocent ant hill in his yard. But one day the ants retaliate. Using a magic potion, they shrink Lucas down to ant size and sentence him to live like an ant in their colony. In this strange new world Lucas will learn important lessons about friendship, get a whole new perspective on life and ultimately find the courage to stand up for himself.
OVERALL
Give It a Rent 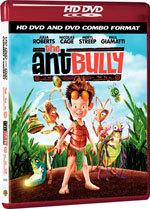 I was hoping for good things from 'The Ant Bully,' after enjoying a string of great animated movies on high-def recently, including 'Corpse Bride,' 'Monster House,' 'Ice Age 2' and 'The Wild.' Alas, this film brought my lucky streak to a screeching halt, though perhaps that should come as no surprise. 'The Ant Bully' was Warner's biggest box office disappointment this past summer, despite strong early buzz and a high-profile marketing campaign. Still, I held out hope -- how could a film with Tom Hanks on board as one of the producers and top-flight voice talent including Julia Roberts, Nicolas Cage, Meryl Streep and Lily Tomlin be bad?

Based on the children's book by John Nickle, 'The Ant Bully' has a promising concept. Little Lucas Nickle (Zach Tyler) is brand new in town, but he's already had a run-in with local bully Steve (Myles Jeffrey). Momentarily fed up, Lucas takes out his frustration on a hill of ants in his backyard. Oops -- not a smooth move, as Lucas soon find out when Zoc the ant wizard (Nicolas Cage) concocts a revenge potion that shrinks Lucas down to ant size. Now just another worker bug mining dung for the ant collective headed by the Queen (Meryl Streep), Lucas is taught more than one lesson in humility through community service. But when the ants are faced with the biggest bully yet -- local pest controller Stan Beals (Paul Giamatti) -- Lucas will be pressed into service as an ant hero. It's the battle of the bullies, and if Lucas can win this thing, perhaps there is a chance Zoc might let him return to normal size and rejoin the world above a kindler, gentler human.

If 'The Ant Bully' is just a little too didactic, it is not for a lack of trying. I have no problem with a little message in my animated movies, especially one preaching empathy and respect for those smaller than you, but this film's approach is just plain heavy-handed. The plot twists and preachy dialogue felt forced and inorganic -- engineered solely to get us from Moral A to Moral B. Which might not have been so bad if the ants were as cute and funny as the dancing penguins of 'Happy Feet.' But they are not. And especially coming after the far more sublime 'A Bug's Life' and 'Antz,' 'The Ant Bully' doesn't have enough charming characters and unique narrative spins to rise above its message.

Still, there is some fun to be had. The film has a jazzed-up visual look, with blazingly bright colors and an almost retro visual aesthetic reminiscent of 'Jimmy Neutron' (no surprise, as 'Ant Bully' shares the same director, John A. Davis). The design of some the bugs is also inspired; I particularly liked the iridescent glowworms, and the '50s-esque chopper wasps. Then there are the film's few-and-far-between action sequences, which are exciting but may be a bit too intense for the youngest set -- Stan the Pest Controller is particularly sadistic during the film's climactic battle scenes. And you can't argue with a film with such a great lineup of voice talent -- leave to Hanks to call a lot of A-list friends -- the standouts are a sprightly Roberts as the fetching Nova, who kindly befriends Lucas, and cult fave Bruce Campbell as a cocky ant scout. In short, if your kids can get past the preaching, 'The Ant Bully' does offer up at least a modicum of entertainment value. 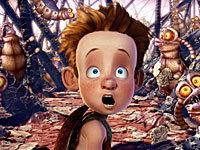 If 'The Ant Bully' breaks little new ground in terms of animation, at least it is a very colorful, appealing-looking movie. Warner offers the film in 1.85:1 widescreen and 1080p/VC-1 video, and it makes the journey to HD DVD nicely. A direct digital-to-digital transfer, the "source" is, of course, pristine. Blacks are excellent, as is contrast. The image is always bright, with shadow delineation some of the strongest I've seen on an animated title. Colors are rock solid, and sometimes so vivid that I wanted to reach for a pair of sunglasses. I didn't find chroma noise to be a problem, though it does appear that a slight bit of "fake grain" was added to the image to give it a more cinematic veneer. Detail is generally excellent, with a very nice, three-dimensional look that never fails to impress. Whatever you think of the movie, it is hard to imagine the video quality of 'The Ant Bully' could disappoint.

Note that 'The Ant Bully' is the latest Warner title to hit Blu-ray and HD DVD simultaneously, and as is the case with all of the studio's dual-format titles these days, they are converting the same VC-1 encode to both formats, same video bitrate and all. As such, the quality of both images is identical, as they should be. I wish I could come up with some exciting, incendiary head-to-head comparison for you, but alas, 'The Ant Bully' offers little help in declaring a winner in the next-gen format war.

Though the initial specs from Warner didn't promote it, 'The Ant Bully' actually comes to HD DVD with a Dolby TrueHD 5.1 surround track, plus English, French and Spanish Dolby Digital-Plus 5.1 options, each encoded at 640kbps. However, this is one of the few instances where the upgrade isn't that significant, at least by comparison. A solid mix to be sure, though the film's sound design is not as enveloping as I had hoped.

Tech specs are well up to snuff. Frequency response is excellent across the entire spectrum, with the largely constructed sound effects pristine both in execution and cleanliness. Dialogue is excellent and perfectly balanced in the mix. Stereo separation across the front soundstage also boasts nice panning between channels.

However, even on the Dolby TrueHD track surround use is not that aggressive. Discrete sounds do pop more on the TrueHD -- I found the standard Dolby track often collapsed the rear channels to a single focal point instead of feeling full-bodied and airy. The action scenes are definitely the real standouts. The Dolby TrueHD track has very robust pans and excellent, seamless imaging. Atmosphere remains lacking, though, and John Debney's often percussive, even military-esque score is also not very pronounced in the mix, which remains disappointing TrueHD or otherwise. 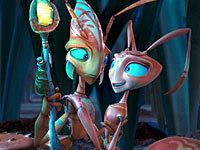 'The Ant Bully' hits HD DVD with the same picnic of extras as the standard-def DVD release. Okay, so maybe nothing here is going to cause a horde of ants to attack the fixin's, but there are enough tasty tidbits here to at least keep the kids entertained.

The best bet for the tots is the eight-minute collection of cute Animated Shorts. And since we all know kids thrive on repetition, there is also a one-minute Ant Screensaver, which will cycle endlessly until a more sane adult hits "Stop."

Also fun are the 11 minutes or so of Deleted Scenes. Most are in rough form, with incomplete animation and stand-in voice tracks. But there is some meat to this footage, at least in terms of adding a bit of character interaction missing in the rather short 82-minute feature.

The best extra for anyone over the age of twelve is the 16-minute "It Takes a Colony." This featurette distinguishes itself primarily because it is hosted by an animated beetle. Focused largely on the animation, interviewees include John A. Davis and all of the main effects crew, who live in the Hollywood equivalent of an ant hill, the "special effects shop." There is also a short bit of footage of the voice talent at work, though oddly none of the major stars are included.

Rounding out the fun is the film's theatrical trailer presented in 1.85:1 widescreen.

'The Ant Bully' got lost this year among a slew of other animated family films. I can't say that's a huge tragedy, but the film has enough going for it that it's a suitable alternative if 'Corpse Bride' is out of stock at your local Blockbuster. This HD DVD release is quite solid -- very nice transfer and Dolby TrueHD soundtrack, with cute (if slim) extras. Still, while kids may like 'The Ant Bully' enough to want to watch it again and again, most adults will probably find other animated choices on HD DVD have better replay value than this.

Sale Price 1.99
Buy Now
3rd Party 2.99
In Stock.
See what people are saying about this story or others
See Comments in Forum
Previous Next
Pre-Orders
Tomorrow's latest releases