Overview - After an acrimonious break up, the Mystery Inc. gang are individually brought to an island resort to investigate strange goings on.
OVERALL
For Kids Only 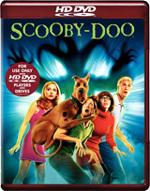 'Scooby-Doo' is the kind of movie critics hate by default, because it is more of a product line than it is a movie. One can only imagine the committees formed at the studio the day the "franchise" was put into motion. Before a script was even written, a cast selected and a director hired, toy line mock-ups were created and theme park ride blueprints drawn up. The "film" itself is almost an afterthought to the entire operation, a loss leader less designed to get butts into theaters before guilting parents into buying Happy Meals filled with Scooby snacks for the tots. By the time the movie comes out, there is little for us lowly reviewers to do but survey the wreckage, somberly filing our tombstone etchings from the graveyard of brain-dead movie franchises.

I suppose the plot of 'Scooby-Doo' is besides the point, but I'll give it a go. After an acrimonious break-up, the members of the Mystery, Inc., gang are individually brought to an island resort to investigate the strange goings-on. But this is no ordinary amusement park, from its spooky owner Emile Mondavarious to rides and attractions that command a most unusual power over the young guests. Fred, Daphne, Velma, Shaggy and Scooby realize that if they are to uncover the dastardly plot behind the park and Mondavarious' true motivations, they will have to put aside their differences and work together again as a team. The Mystery gang is back, back, back!

I once read a message board posting from a fan that said Hollywood's obsession with remaking every remotely viable property from the '60s and '70s is like "being raped of our childhood memories." Crude, but accurate. Still, I'm not offended by a movie like 'Scooby-Doo,' as much as I am disappointed. The film is so geared to the worse impulses of the 8-year-old, overflowing with every variation on the fart joke imaginable, that it forgets to ever be smart, funny or clever. I have nothing against family films, but aren't they supposed to be fun for everyone? Just take one look at Pixar or the best of Disney to see how art and commerce can happily co-mingle, elevating the form and creating the kind of transcendent entertainment that appeals to the child in all of us, not just the spoiled brat with no attention span.

I did find some things to like in 'Scooby-Doo.' The film has superb production design -- colors are wonderfully wacky, the sets and costumes are oversized to amusing extremes, and I suppose the CGI Scooby is fine, since the movie was based on a cartoon anyway. And the human cast is actually quite capable, even if they are wasted by a terrible script. I can't say Freddie Prinze, Jr., or Sarah Michelle Gellar are the finest actors of their generation, but they make a pretty couple and certainly look the part. Even better is the vastly underrated Linda Cardellini as Velma, who slyly plays up the long-simmering resentment towards her prettier Mystery co-sleuths and nicely mines the character's reigning status as a lesbian icon. And Matthew Lillard so channels of the spirit of Shaggy that it is truly frightening, even if the character remains supremely annoying.

Alas, 'Scooby-Doo' is still a pretty terrible film. It has only one speed -- overdrive -- and is so full of missed opportunities that it makes one pant like a dog for the sweetness and simple storytelling of the original animated series. This is one film I wouldn't wish on the kids of my worst enemies. And that it was successful enough to warrant a sequel (2004's even more horrendous 'Monsters Unleashed') is a bit disheartening. 'Scooby-Doo' aims low, achieves even less, and made a ton of money at the box office. I'm sure there is a lesson in there somewhere that future generations would be wise to heed. 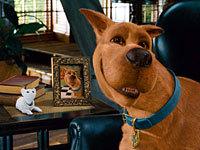 'Scooby-Doo' is the perfect example of what I call the "Inverse Proportion Theorem" of video quality. Meaning that the more atrocious the movie, the more fantastic the transfer. Like dangling crack in front of an addict, otherwise-sane early adopters are compelled to plunk down cash for a movie they would never in a million years waste their money on, only because it looks so damn good. 'Scooby-Doo' is just such a temptation. It looks wonderful on HD DVD, and nothing short of driving a rusty meat hook through the malformed cranium of Matthew Lillard can stop you from bowing before its brilliance.

Warner has again done one of its simultaneous HD DVD/Blu-ray double-take releases, repurposing the exact same 1080p/VC-1 encode on both versions, and it truly sparkles. Colors are vibrant, with eye-popping primary hues that really do leap off the screen. It is hard to imagine kids won't be transfixed by this one, and I admit I wanted to whip out my fingerpaints and cover my skin with Scooby leopard spots. Colors also don't bleed or look particularly noisy despite the excess, and fleshtones are about as natural as can be expected with a movie like this. The sense of depth and reality to the image is really superb, with all of the garish costumes and sets finely textured down to the most minute detail. And the source material is just about immaculate, having been given the usual CGI waxing that makes the actors look less flesh-and-blood, and more like robots. Given Freddie Prinze Jr.'s acting skills, at least that's not too far off the mark.

'Scooby Doo-Doo' sounds great, too. Warner again mirrors the Dolby Digital tracks on both the HD DVD and Blu-ray releases, with each encoded at 640kbps. The film's sound design is lively and, dare I say it, delightful.

Surrounds are quite active. All manner of silly effects bounce all over the place, from the skids of the Mystery Machine to Scooby's paws scrapping on concrete. I can't say I loved the score, but it really swells up in the rears, and combined with all the discrete effects, an enveloping 360-degree soundfield is created. Dynamic range is also excellent -- this is nothing if not a very polished soundtrack. Even Shaggy and Scooby's constant, ingratiating yelping is not harsh or distorted. For better or worse, dialogue sounds pitch-perfect and is very well balanced in the mix, meaning we actually can hear ever word of the awful script. Indeed, "high-definition" truly can be double-edged sword. 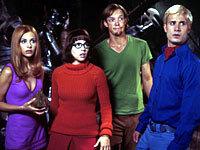 You sat through the film itself and now you want to know about the making of 'Scooby-Doo?' Are you a masochist?

Not one but two screen-specific audio commentaries are included. Director Raja Gosnell and producers Charles Roven and Richard Suckle make up the first, with the second track featuring cast members Freddie Prinze, Jr., Sarah Michelle Gellar, Matthew Lillard and Linda Cardellini. The first is quite specific, going into all manner of technical tidbits, the special effects, and how CGI Scooby was born. Unsurprisingly, very little time is spent on the "story" or the "characters." But what is truly shocking is how lame the cast track is. You'd think young Hollywood would love to hear itself speak, but these four have precious litle to say, with what seem like endless stretches of silence at several points in the track. Was Gellar knitting through the whole thing? Cardellini memorizing her 'E/R' lines? What a fun set that must have been!

"Scooby Doo: Unmasking the Mystery" is your typical 22-minute promo. Unfortunately, there is very little in the way of on-set footage, nor even much on the CGI Scooby, only a bunch of talking heads. This is the equivalent of making-of dog food. Also earning comparisons to Purina Chow are another three featurettes, each covering different aspects of the production and offering little in the way of real info: "The Mystery Van" (1 minute), "Scary Places" (4 minutes) and "Daphne's Fight Scene" (2 minutes). Note there is also the 1-minute "Rain on the Set" featurette (wow, you mean all that water was fake!?), which was hidden as an easter egg on the previous standard-def DVD release.

Next we have a self-running compilation of Additional Scenes with an optional commentary from Gosnell. If you are wondering how they chopped the film down to a still-too-long 86 minutes, you won't find the answer in these four scenes plus an alternate opening. All this stuff is weak, and doesn't look very good either. Like the rest of the supplements, all the video material is presented in 4:3 windowboxed 480i video.

Rounding out the Scooby snacks is the Outkast "The Land of a Million Drums" music video, plus the film's Theatrical Trailer. (Note that gone from the HD DVD release is the "Spooky Island Arcade Challenge" game, but as this was one of those really basic, lame standard-def DVD things, it is hardly missed.)

I found 'Scooby-Doo' to be a pretty dreadful film, but then it wasn't really made for me, was it? I suppose if you have anyone under the age of ten years-old in your household, this will work as a virtual babysitter for an hour and a half. All others -- you've been warned. Having said that, this HD DVD release looks and sounds great, and there are even a few extras geared for the kiddies. I'm counting the days until 'Scooby-Doo 2: Monsters Unleashed' hits high-def...

Sale Price 4.99
Buy Now
3rd Party 6.47
In Stock.
See what people are saying about this story or others
See Comments in Forum
Previous Next
Pre-Orders
Tomorrow's latest releases